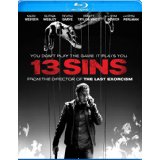 “Congratulations! You have been selected to take part in a once-in-a-lifetime game show. Of a long list of candidates in financial need, you have been chosen to compete for a fantastic cash prize.”

Elliot Brindle (Webber) is having a tough patch in life. He wants to marry the woman who is about to have their baby, but his financial situation isn’t going to support a new family. He’s behind on his bills, he’s supporting his brother’s stay in an assisted living facility (instead of an insane asylum), and his father is about to be evicted from his own apartment. If that wasn’t all enough, he just got fired from his sales job because his boss doesn’t think he has the killer instincts to succeed. It looks like the end of the line for Elliot with no way out until he gets a mysterious call on his cell phone.

The caller has one of those radio-hype voices and tells him he’s been selected to play on a game show. Of course, no one asks what station, paper or company the game is being offered by. The caller appears to know all about him and makes it clear early on that he is being watched. He’s told that he will earn increasingly higher cash amounts for completing 13 challenges. The first two are easy. A grand just for swatting the fly the caller knows has been buzzing around his car. Another six grand for eating the swatted fly. So far none of this is stuff we haven’t seen on Survivor.

Of course, the tasks get riskier and begin to first violate his moral center and eventually the law. Before we know it Elliot is being led on a crime spree that he follows with little question. Sure, he puts up the original “I won’t do that,” but it takes no real convincing to get him to continue along, or he forfeits the cash he’s won so far.

It’s a bit amazing just how quickly Elliot accepts the authority of the voice on the other end of a phone. He acts partly out of greed but also out of fear. After all, this person is watching him and is always 100 % sure of himself. It’s a clever plot device that reveals something psychologists have been studying for decades. People will go completely against their own belief in right or wrong when compelled by the voice of authority.

In 1961 a psychiatrist named Milgram was fascinated with the Nazi war crime trials. Many of the defendants used the excuse that they were just following orders. Milgram wanted to find out just how far that was true. He set up a famous and controversial study where he had participants ask questions of another “participant”. When the answer was false or there was no answer they were told to administer increasingly higher volts of electricity to the person. They were not forced or threatened. When they would hesitate they were merely told it was important that they continue. What they found was that people would give lethal jolts of power merely because they were told to. 65% of the participants eventually delivered the highest shock, marked dangerous on the board. That kind of real-life study makes it more believable that a desperate man like Elliot would go beyond his own moral code when you add the extra incentive of much-needed cash.

Director Daniel Stamm works from a pretty simple script and concept here. He lets us see how desperate Elliot is and very quickly springs his trap. He depends completely on the acting ability of Mark Webber, who must sell us on the change from the meek guy we first encounter to the guy who can descend into the madness required of him by the game. Webber doesn’t really let us down. He’s convincing as the opening loser and gives us enough emotional baggage to buy him in his nightmare. Still, there are moments when Webber’s emotional level isn’t consistent. I would have liked to have seen more of the inner turmoil. Particularly, I wanted to see that moment. I wanted to be able to recognize instantly the moment he’s changed. It’s that Michael Corelone moment where we can look in his eyes and know he’s no longer the same person. Webber doesn’t really get the chance. Stamm never pauses enough on his actor to give him the chance to show us that crucial instant. Instead Stamm keeps the action going, opting to cover the small flaws with the distraction of momentum. Whether this was an artistic choice or an issue with confidence in Webber, I don’t really know.

The piece is populated with a few good performances. Ron Perlman dominates every scene that he’s in. He doesn’t really share much screen time with Webber, and that’s a smart choice. Likely he was there for a limited number of days, which explains why he’s terribly underused here. True Blood’s Rutina Wesley gets to break out from that show’s shadow here but is once again somewhat underused. Stamm wants to keep us focused on Elliot, and that gets tedious at moments.

It’s impossible to escape the comparisons to Saw here. The phone voice delivers instructions in very much the same style. He even offers a few social comments that could have come directly from Jigsaw. I think it might have been best to avoid a challenge that actually involves a saw and amputation. It only invites the inevitable comparison, and this really isn’t that kind of film. The gore comes across as forced. It’s almost as if Stamm didn’t trust the audience to keep up with the social story he was actually telling. Usually when we hedge our bets, it ends up taking something away. Those moments certainly do that here.

The film also attempts to work in an historical mythology for the game that, once again, wasn’t necessary. He’s trying far too hard here when he connects the game to some rather obvious historical events. Stamm needs to trust his material more, and more importantly, he needs to trust that we don’t need those distractions. That time would have been better served giving us those moments that sell the emotional de-evolution for Elliot.

13 Sins is presented in its original aspect ratio of 2.40:1. The 1080p image is arrived at with an AVC MPEG-4 codec at an average 35 mbps. The high-definition image presentation delivers on atmosphere. The image is sharp and delivers on the texture of these locations. Black levels provide nice inky darks in a film that takes place quite a bit in the dark of these city streets. It’s a realistic image that appears true to the filmmaker’s intent.

The DTS-HD Master Audio 5.1 is not going to shake you out of your seat at any time. This is a dialog-driven piece, and the audio always delivers a clean and flawless experience.

Deleted Sequence: (5:50) This sequence involves a deleted sequence that was very correctly cut from the film. It would have made the film less accessible to be sure.

Alternate Ending: (2:01) Involves a conclusion for the consequences of Elliot for his actions.

Anatomy Of A Meltdown: (2:41) The director shares a clip from his Skype session with the writer when he tells him of the deleted scene. Sorry to hear this was one of his most proud moments (the scene). I’d love to know how the writer reacted to its inclusion.

In the end there’s no new ground broken here, but the story and performances are compelling enough to keep you interested. There are a few twists that I won’t give away here. Most you’ll see coming but they’re satisfying turns. Stamm utilizes his locations well. This is New Orleans, but it’s not the same parts of the city that have just been overused since Katrina. He finds a way to create atmosphere in these locations and just enough realism to keep us engaged. In the end the film shows that “Any man can be turned into a monster”.

Gino Sassani is a member of the Southeastern Film Critic's Association (SEFCA). He is a film and television critic based in Tampa, Florida. He's also the Senior Editor here at Upcomingdiscs. Gino started reviewing films in the early 1990's as a segment of his local television show Focus. He's an award-winning recording artist for Omega Records. Gino is currently working on his 8th album Merchants & Mercenaries. Gino took over Upcomingdiscs Dec 1, 2008. He works out of a home theater he calls The Reel World. Favorite films: The Godfather, The Godfather Part II, The Body Snatcher (Val Lewton film with Karloff and Lugosi, not the pod people film), Unforgiven, Gladiator, The Lion King, Jaws, Son Of Frankenstein, The Good, The Bad And The Ugly, and Monsters, Inc.
Teen Wolf: Season 3 Part 2 Masters of Sex: Season One