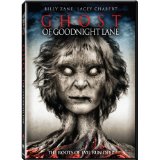 When I read on IMDB that this was meant to be a horror comedy, I have to admit I breathed a sigh of relief.  After watching Ghost of Goodnight Lane I just simply was left wondering if the laughs were intended or if this was a film that just was delivered so poorly that you just couldn’t help but laugh at it.  Having seen now that the film was intended for laughs, I’m still not so sure it’s helps the film any.  Though it has a solid story and a decent cast, the execution just falls flat.

Filmed in Dallas, Texas, a film crew is struggling to finish up a film they have been working on.  Pulling some overnight hours, the film’s editor Ron (Richard Tyson) is mysteriously killed, though the police believe it to be simply by natural causes.  But the rest of the crew suspects there is more to their crew member’s death, and it doesn’t take long before paranormal activity starts occurring throughout the production office.  Billy Zane plays Alan, the leader of this overworked crew, as he tries to convince himself and the others nothing is happening even though denial seems to be harder and harder to fall back on as the activity grows more intense.

What bothers me most about this film is how much CGI work is involved throughout the production that simply was never needed.  The “ghost” that lingers throughout the location has an exaggerated look that had it been done with just practical makeup and not wasted time with manipulating the eyes and facial features in post, it would have been more effective.  Sure, the effect is more “supernatural” in appearance, but the execution just never had me convinced, and it quickly sucked me out of the film.  But going a step further, when the “ghost” would possess the characters in the film, we would see the characters twist and contort their faces, which made it feel more like a slapstick comedy than a moment that could ever be taken seriously.

Playing in the film’s favor is the back story that is given to the spirit that is haunting the location.  Giving us a real-world explanation and tying the character to a criminal that exists in the real world that just about every viewer will know was a clever touch that I did enjoy. Is it enough to forgive the film for its campy moments, though?  This is a film that suffers from trying to do so much with effects and attempts to force scares that taking a more low-key approach would have benefited the film.

The cast does seem to be having a good time, and it does make the film  a more bearable experience.  The actors do their part in hamming things up in specific scenes while, Lacey Chabert plays things in a more straight-laced fashion that works for her character, Dani.

This movie won’t appeal to everyone, but for those that can appreciate a Troma film and don’t mind a B-film from time to time; this movie is right up your alley.  I just never connected with this film. Maybe on future viewings it’s a film I could warm up to, but sometimes it’s better to just move along and look forward to the next film.

Brent Lorentson is a horror writer and film critic based out of Tampa, Florida. With a BA in Digital Film, he co-wrote and co-directed Scavenger Hunt. His short stories have appeared in various horror anthologies. In 2019 his short script Fertile Blood will be a part of the anthology horror film Slumber Party. He is currently working on his first novel A Dark and Secret Place set to be released in late 2019. Favorite Films: Taxi Driver, Fight Club, I Saw the Devil, The Wild Bunch, Dawn of the Dead, A Clockwork Orange, Pulp Fiction, Heathers, The Monster Squad, and High Fidelity.
Transformers: Age of Extinction Scavenger Killers