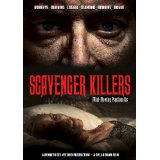 The Killers at the center of this movie are a sanctimonious judge (Robert Bogue) and a buxom defense attorney named Clara Lovering (Rachael Robbins) who doubles as his lover/accomplice. Ordinarily, I wouldn’t mention a character’s, ahem, physical attributes while relaying the plot of a film, but I mention it here for two reasons. Firstly, Robbins’ IMDb page features credits like Bikini Bloodbath Car Wash and Vampire Lesbian Kickboxers (I wish I was making this up); so I have a feeling she knows exactly where her bread is buttered. More importantly, all of Scavenger Killers plays out as if it were written by a particularly immature and debauched 13 year old boy.

The credited screenwriters are actually Robbins and Ken Del Vecchio, who is also one of the film’s producers and co-stars as the mute, brilliant, wheelchair-bound FBI Agent Truman. (Del Vecchio is a grown man, so we’ll have to discard the potential excuse that this movie was conceived by a hyperactive teen.) As Truman tries to deduce the identity of the Scavenger Killers — who use a different, deranged murder method each time — a different FBI agent named Dewayne (Dustin Diamond…wait, what?!) uses his psychic powers(!) to conduct a separate investigation. Did I mention that Agent Dewayne also suffers from Tourette syndrome, or that Truman and Dewayne’s supervisor is played by the unendingly shameless Eric Roberts? Or how about the fact that the only way Agent Dewayne can channel his psychic powers is by fondling a large black woman (Thea Vidale), who is apparently employed by the FBI just so she can sit around and be fondled by Dewayne.

“We’re having some fun! Relax! You’re getting too heady.”

Based on the last few sentences I wrote, Scavenger Killers is obviously not meant to be taken entirely — or even mostly — seriously. The film does stumble into a few genuinely amusing bits, like the phony, off-color sign language Del Vecchio uses as Agent Truman or having a character bludgeon another one with a severed head. And there’s certainly precedent for combining laughs with stomach-turning violence; just look at the early work of a couple of guys named Sam Raimi and Peter Jackson. The problem here — besides the fact that there’s no palpable, inspired joy to the sick zaniness here — is that the balance is completely thrown out of whack by hapless, amateurish filmmaking.

I’m deliberately stopping *just* short of using the word “incompetent” because director Dylan Bank uses some of the practical gore effects reasonably well and comes up with a few nifty shots, including a throwback, POV kill. Instead, the issue lies with scenes that drag on way too long and killings that are equal parts tedious and nasty. Whereas the Saw and Hostel films had a demented flair, Scavenger Killers — due to its lo-fi production and (more crucially) reprehensible characters/subject matter — is flat-out unpleasant to watch.

It’s too bad because Bogue (best known for his role on daytime soap Guiding Light) gives a delirious, go-for-broke performance that belongs in a better movie. He carries his scenes with Robbins, whose acting — along with almost everyone else in the cast — can best be described as “porn-y.” The exceptions include Roberts, who looks as amused to find himself in a movie this bad as we are to see him here. A long time ago Roberts was nominated for an Academy Award for his work in Runaway Train; so no matter how many terrible movies he cranks out, he’ll forever be “Oscar nominee Eric Roberts.” Speaking of Oscar nominees cranking out terrible movies, Scavenger Killers also managed to snag Charles Durning (in one of his final roles before his 2012 death) and Robert Loggia (as a doctor/serial killer targeted by the titular couple when the movie briefly threatened to become interesting).

Given that the FBI agents are either presented as condescending jerks (Truman) or bumbling morons (Dewayne), it stands to reason that Scavenger Killers wants us to be rooting for these murderers who torture and violate people at random. (Judge Limone and Clara select their victims by occupation, which leads to the killing of a “waitress”, “cowboy”, and — in the most demeaning sequence of them all — a “girl rock band.”) I have no doubt there are people out there who’ll get a kick out of this particular brand of shlock. I also won’t be surprised if some of those people end up cheering on the Scavenger Killers. Personally, I was just rooting for the 102 minutes to fly by as quickly as possible.