Posted in: The Reel World by Brent Lorentson on July 2nd, 2014 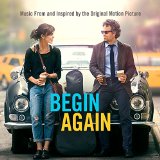 In a summer that has been taken over by giant lizards and robots, it is a little odd to find a little sweet film like Begin Again playing on the screen and competing with the heavy hitters of summer. From the writer/director of indie smash Once we get a film that isn’t just about musicians trying to make their big break, but instead it’s about the heart and pain that goes into the creation we later hear and become fans of.  When we first meet Greta (Keira Knightly) she is nursing some heartbreak in a bar, and her friend drags her up on stage to perform her new song.  It just so happens that at that moment, struggling music executive Dan (Mark Ruffalo) is in the audience, and he believes that she could be the next big star.  The film backpedals from this moment and then proceeds to show us just how Dan and Greta managed to come together at this bar on this particular night.

Dan has recently been removed from his own record company and doesn’t have a penny to his name, but despite it all, Dan rolls with the punches with the nursing aid of a stiff drink.  Greta, on the other hand, was the girlfriend and partner to Dave (Adam Levine), a rising star on the music scene who believes he has fallen in love with another woman.  The scene where Greta discovers that there is another woman is a moment that starts innocently enough and then proceeds to just be a heartbreaking moment.  As breakups go on film, this is just one of those scenes where as a viewer you just instantly empathize with Greta and can’t help but see Dave for the scumbag he is.

But this is a film about redemption and healing, where Greta takes her pain and throws it into her music and Dan helps her in producing an album like one that has never been done before.  The concept of recording an album around the city of New York seems crazy, and we get to sit in and watch how this recording plays out while the album comes together.  Greta in turn returns the favor to Dan by helping him mend his broken relationship with his daughter Violet (Hailee Steinfeld) and his ex-wife, played by Catherine Keener.

What makes this film work so well is that it simply has so much heart.  It pains me to have to use this phrase, but this film is heartwarming in all the right ways.  You can’t help but root for Greta and Dan on this crazy musical adventure that they have set out on.  And as the two begin to develop a relationship together, it’s one that left me wondering just what could happen with these two.  There’s this scene that just works so well, where the two walk throughout New York while listening to Greta’s playlist with the aid of a splitter and headphones.  It’s simply one of those moments that reflects the power of music and the company you are with.  It’s just a great scene that everyone who is a fan of music can relate to.

After reading about how Adam Levine went into doing this film without pay, it had me appreciating his performance in the film all the more.  The front man for Maroon 5 has been looking to expand his presence in the entertainment industry by judging on The Voice and his appearance in American Horror Story: Asylum.  But it’s this role that has the potential to help him break out and slide into the role of possible leading man in Hollywood.  Sure, it on paper the idea of Levine playing a musician doesn’t seem like much of a stretch, but there are some emotional scenes throughout this film where his performance could have made or ruined the scene, and he delivers a solid performance throughout.  Though the performance I was most impressed by is Knightly’s.  If the audience doesn’t care for this character, the film will simply fall on its face but Knightly is charming from start to finish, and believe it or not, that is actually her singing in the film.

Following nicely in the footsteps of Once and it’s awards nomination for the music in the film, I feel it’s a safe bet to say that Begin Again will follow suit with its impressive music selection throughout.

Unfortunately, the timing of this film’s release will be its undoing, which is such a shame.  This is a movie that calls out to those who complain about summer films being nothing but loud, brainless products geared to kids who are out of school for the summer.  Begin Again fits nicely on the shelf alongside Almost Famous, High Fidelity, Scott Pilgrim, and Crazy Heart.  It’s a film that is waiting for an audience to sit back and fall in love with it, a film where couples can escape the popcorn flick and embrace this little film that I believe is the gem of the summer.

Brent Lorentson is a horror writer and film critic based out of Tampa, Florida. With a BA in Digital Film, he co-wrote and co-directed Scavenger Hunt. His short stories have appeared in various horror anthologies. In 2019 his short script Fertile Blood will be a part of the anthology horror film Slumber Party. He is currently working on his first novel A Dark and Secret Place set to be released in late 2019. Favorite Films: Taxi Driver, Fight Club, I Saw the Devil, The Wild Bunch, Dawn of the Dead, A Clockwork Orange, Pulp Fiction, Heathers, The Monster Squad, and High Fidelity.
The Glades: The Complete Fourth Season Earth To Echo