The Glades: The Complete Fourth Season 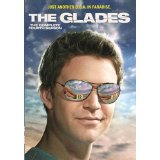 Jim was a Chicago cop who had a disagreement with his boss. That little disagreement was his boss shooting him in the butt for sleeping with his wife. Jim Longworth (Passmore) made out okay. He got a huge settlement and a fresh start in a warm climate. Oh, and you and I got ourselves another one of those smart-aleck detective shows. Not a bad deal, when all is said and done. Much of this used to be covered in an opening credit monologue which has since disappeared. I guess they figure you should know all of this already.

Jim is one of those detectives who thinks he’s got a lot of charm. He smiles a lot and appears to be very cavalier about his job, but really takes it very seriously. Unfortunately, he rubs most folks the wrong way. He says whatever comes to mind and doesn’t much care who he offends. He works for the Florida Department of Law Enforcement (FDLE), a state police agency. His partner is also the agency’s medical examiner Dr. Carlos Sanchez (Gomez). The two have one of those bickering friendship relationships. Jim is now engaged to former hospital intern Callie (Sanchez); she’s now moved back from Atlanta so that they can be married. She used to be married to a criminal named Ray who is now in the witness protection program. Local Florida actor Jordan Wall makes a good showing for himself as the eager intern for Carlos. His energy is infectious, to say the least. He was a fortunate find for the show. Intended only as a throwaway character in the pilot, he earned a spot on the regular cast. That’s also how actress Michelle Hurd worked a bartender role from the pilot that ended up on the cutting room floor to a part as Jim’s boss.

The show takes place in the fictional Florida town of Palm Glade. Most of the show appears to be shot around the Hollywood, Florida area. While the title suggests a more rustic swamp location, the Everglades really don’t play any real role in the series. It’s strictly a title used for color and imagery that don’t reflect the actual series at all. The cases are typical with the slight eccentric element to keep the episodes from falling entirely into the procedural routine. Passmore has good chemistry with Gomez, and the two are really what keeps the show interesting. Honestly, Jim is such an arrogant character that we would tire of quite quickly if not for a good support cast.

There is a definite formula working here. Jim gets a case and he proceeds to accuse and arrest all of the suspects until he finally figures it out and an arrest sticks. It’s kind of like musical chairs. Whoever is in handcuffs when the end credits roll is the bad guy. I’d love to be the attorney for these criminals. Jim usually arrests so many people, sometimes more than once, that he’s doing a pretty good job of establishing plenty of reasonable doubt for the guy who ultimately takes the fall.

There are two storylines that carry through the fourth season. Both appear to converge in the cliffhanger season finale. There’s the wedding plans that allow us to meet both Jim and Callie’s various family members and old friends. L.A. Law’s Corbin Bernsen plays Jim’s father, while Taxi’s Marilu Henner plays his mother. The second thread involves Ray and his time in witness protection. We never see him, but we learn he’s looking to cut out of the program and eventually does. His son is turning 18 and will no longer be allowed to visit him. While we don’t know for sure it’s related to the cliffhanger climax, I’d say it’s a safe bet.

The season also features a recurring role by Lou Grant’s Ed Asner as a rather abrasive doctor for whom Callie ends up working at the hospital.

Don’t look for anything groundbreaking, and you’re likely to not be disappointed by this one. It plays on A&E but looks like something you’d expect from USA. I never caught the show on air; in fact, I’ve heard very little about the series at all. I still found it harmless and entertaining enough. There are 13 episodes on four discs. It’s enough to give you a chance to get to know the characters, which is really what this show is all about. Episodes tend to give us glimpses into odd sub-culture lives. This season we get Civil War reenactment suspects, jai alai players, Roller Derby babes, a band of gypsies, a zombie run, competitive barbecue (I have a cuz who would fit right in there) and a three-way polyamorous relationship. It’s a returning series, and we get a cliffhanger in the last episode. One we will now never see resolved with the ending of the series.  “Don’t you just hate that?”

Gino Sassani is a member of the Southeastern Film Critic's Association (SEFCA). He is a film and television critic based in Tampa, Florida. He's also the Senior Editor here at Upcomingdiscs. Gino started reviewing films in the early 1990's as a segment of his local television show Focus. He's an award-winning recording artist for Omega Records. Gino is currently working on his 8th album Merchants & Mercenaries. Gino took over Upcomingdiscs Dec 1, 2008. He works out of a home theater he calls The Reel World. Favorite films: The Godfather, The Godfather Part II, The Body Snatcher (Val Lewton film with Karloff and Lugosi, not the pod people film), Unforgiven, Gladiator, The Lion King, Jaws, Son Of Frankenstein, The Good, The Bad And The Ugly, and Monsters, Inc.
Lucky Bastard Begin Again