Posted in: No Huddle by Archive Authors on July 6th, 2014 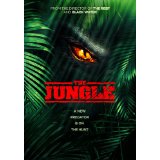 In 2011, four men, Larry Black (big cat expert), Ben Black (cinematographer/Larry’s brother), Budi (a local) and Adi (a government tracker) ventured into the jungles of West Java, Indonesia in the hopes of finding and filming a documentary about the endangered Javan leopard. Unfortunately they crossed paths with something deadlier, and it was all caught on film.  The Jungle, a documentary/found footage film, was written/directed/produced by Andrew Traucki. Mr. Traucki’s other works include the ocean thriller, The Reef (2010), which made the sharks in Deep Blue Sea (1999) look more like tame goldfish. He also wrote/directed, Black Water (2007), a swamp saga that had folks bidding a fishing trip in a bayou adieu. The term ‘gator-bait’ pretty much sums it up.

Andrew Traucki is quickly making a name for himself in the B-Movie thriller genre. He has paddled out of the water and come onto land for The Jungle, a “reality TV” meets “Animal Planet” scripted film made to look like a documentary.  Despite this new approach, Mr. Traucki manages to master putting the fear of the unknown into the viewers by providing the ever-elusive feeling of being watched by something or someone. Allowing the viewer to feel as if they too are experiencing the adventure, while trekking through the jungle searching for the elusive Javan leopard only serves to heighten the fear.

The multi-talented Australian actor Rupert Reid plays Larry Black. He leads the expedition and becomes a thorn in the side of other group members time and again, particularly when they want to flee the area due to fear. Larry is determined to push deeper into the jungles of West Java, Indonesia, regardless of the cost. All in the name of trying to protect the Javan leopard through government funding– provided he can deliver proof of their existence before it is too late. No proof, no money.

Other key actors in the movie are: Agoes Widjaya Soedjarwo, who plays the town local, Budi, and Igusti Budianthiki, who plays Adi, the supposedly experienced government tracker who leads the expedition. Most times Adi appears unsure if he should scratch his watch or wind his butt, let alone find a trail.

The adventure begins on October 11, 2011 in New South Wales, Australia as Larry Black and Ben Black prepare to leave for West Java. The viewer is introduced to Budi when Larry Black engages in a short conversation with him via Skype. There are a few touching moments shared between Larry Black and his wife, Jen Black. Mr. Traucki’s documentary film style helped capture the true emotional side of saying goodbye to someone you love who you know may or may not be coming back. Although the appearance of Jen Black is brief, the actress who played the role delivered a very convincing performance of support, love and sadness for her departing husband.

Rounding off the family farewells was a funny moment between Larry and his pet wiener dog, Frankie. Wish they would have shown more shots of Frankie. He was cute.

The following day, several obvious cut-and-paste scenes are shown as Larry and Ben travel to Indonesia to meet up with Budi and Adi. Mr. Traucki adds a bit of genuineness to these sequences by incorporating the headaches that can come along with long-distance traveling, such as missing a connecting flight. Anyone who travels knows this is one of the most aggravating, stressful things to happen — next to an airline losing your luggage.

The viewers are soon introduced to Budi and Adi, two characters within characters, if you know what I mean. Budi comes across as highly intelligent, almost professor-like, while Adi, for all of his alleged tracking talent, is nothing more than a lost child in need of self-direction.  The two men, combined with Ben Black, a quiet, agreeable follower who films everything, and Larry Black, an often brazen leader, make for a good ensemble cast that balance out one another.

Puchi is a local who appears in one short scene. Her sole purpose is to warn the group about an alleged “Forest Demon” who resides in the jungle. Budi is quick to dismiss Puchi as a foolish woman wrapped up in superstitious muckety-muck. Larry and Ben side with Budi on the matter. It soon becomes apparent, as the group travels forth, that Adi believes a Forest Demon does exist. His fear of running into the creature may explain why he can never find trails, especially when they are fresh and lead further into the jungle.

The first night in the jungle arrives. The group happens upon an Indonesian village rooted deep in mythical beliefs. This scene was good in that it reiterated Puchi’s warning about the Forest Demon, but it was also disappointing. While it was wise to throw in some native tongue bantering between Budi, Adi and a villager for authenticity, there was a lack of subtitles provided underneath to help a viewer understand what was being said. Although one could tell something bad was spoken based on Larry Black’s abrupt reaction, it isn’t until a few minutes later during Adi’s verbal summary the viewer is let in on the secret. Perhaps Mr. Traucki was going for a moment of suspense.

In order to get the hunt for the Javan leopard started, another villager arrives the following morning to inform the group about possible poaching in the area. He leads them into the jungle to where a few cages have been set up to trap prey. One of the cages holds a serpent. The villager suddenly gets a bad vibe and flees the area. The others remain behind. For those who get squeamish at the sight of snakes, you might want to fast forward through this part of the film.

There are a few boring scenes showing the group as they make their way through the jungle. Nothing super-exciting happening– visual or audio– during those times. A funny moment does eventually occur when Budi and Adi convince Larry to try an Indonesian herb which is supposed to provide stamina. Apparently the herb tastes awful as Larry is filmed retching and spitting the leafy remnants out of his mouth, while Budi and Adi laugh at his predicament.

Adi finally puts his tracking skills to use after fresh bloody claw prints are discovered on a tree trunk. Larry believes a leopard made them and decides this would make a great spot to set up camp for the night. Leopards are night creatures, after all.

Ben films the evening’s activities using a night vision camera. Larry sits in the same tent beside Ben, prepped and ready with a tranquilizer gun for tagging purposes.

Meanwhile, Adi and Budi entertain themselves in the background. A chicken (that was never shown during the hiking footage) suddenly appears. She has one of her feet tethered to a nearby tree. She is the bait. Ben fixes a time lapse camera onto a tree trunk in order to capture the anticipated arrival of a leopard. The first night of this routine nets nothing but the activities of a bored chicken.

Thankfully the film picks up the pace of eeriness the next day with the discovery of half-eaten dead animals, human body parts scattered on the forest floor, black magic skulls swinging from trees, hairy feces, giant animal prints, a shot of the elusive leopard on film, and some infighting within the group – particularly between Adi and Larry. The arguments tend to come across as staged and overdone. Budi and Ben have to mediate between Larry and Adi. I kind of kept wishing one of them would shoot Larry in the butt with the tranquilizer gun when he acted like a jerk.

The film’s climax arrives at night while the group is hanging out at the campsite. Up until this point, the viewer has been teased with blurred, shaking glimpses of the Forest Demon as it lurks about in the jungle, following the group. A little hairy body part is seen here, some glowing eyes spotted there. One has to wonder if those glowing eyes could actually shoot forth lasers. Now that would have been kind of cool. The snarly, growly sound effects chosen for the Forest Demon brought back immediate memories of the movie Predator (1987)…while its appearance resembled something more likely to exist if Bigfoot and an Arctic Yeti mated.

Like any good thriller, the characters are plucked off one by one starting with the chicken and ending with…well you are going to have to watch the film to find out who lives and who dies. A fair warning: if you are motion-sensitive you might want to take a Dramamine for the attack scenes. There is a lot of camera-shaking, screaming, and flashing nighttime lights netting overall chaos. At times it is hard to tell what is going on or who is being affected by it.

It should be noted the nighttime filming was crisp, with good lighting in both the standard nighttime shots and the shots using a night vision camera. The sound effects were realistic and lent a strong feel of being in the jungle. Andrew Traucki was clever to throw in some bloopers along the way. This made the documentary feel of the film all the more realistic.

Despite the positive aspects of the film, there are a few negatives. I wish more attention had been focused on the mysteriousness of the Forest Demon. I wish the killing off of the characters had been spaced out. And I wish the film had a stronger ending. Please understand, I am not knocking the ending entirely.  I just felt it could have been a little bit more jaw-dropping than what it was.

In my opinion, The Jungle is the type of film you will either love or wish the Forest Demon had eaten the camera at the beginning of the film.

Contest: Win China Beach: Season 3 From Time-Life and Star Vista Once Upon a Time in Vietnam