Once Upon a Time in Vietnam

Posted in: No Huddle by Brent Lorentson on July 8th, 2014 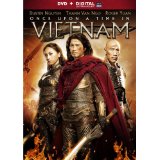 Any time I see a film released with the words Once Upon a Time (insert location), I feel the film is already setting itself up for failure. There are numerous classics that boast that title; Once Upon a Time in the West as well as Once Upon a Time in America are two that come to mind that are classics in their genres.  But then you have Once Upon a Time in Mexico, which for me was a lackluster conclusion to the El Mariachi trilogy.  Now we have the release of Once Upon a Time in Vietnam and, well, despite its attempts to be a big sprawling epic, the film just doesn’t deliver.  Dustin Nguyen puts on many hats in his first feature release, filling in the roles of actor, writer, director and producer.  It’s an ambitious undertaking and seems to be a labor of love; unfortunately, it doesn’t always reflect in the film.

Master Dao (Nguyen) is something of a loner, on a quest to find other warriors like himself.  What Dao plans to do with these warriors simply depends on whether they are good or bad.  In some ways you can see this Dao character in the same vein as The Man With No Name, the similarities are there and are very apparent, but Dao seems to lean more towards the “hero” side, considering he follows in the ways of Buddha.  Once he arrives in a small village, he rents out a room from a couple who have a young rebellious child of their own.

From the start of the film there is an issue that is never addressed that I just can’t seem to get past.  Though the characters seem to be poorly dressed in a wardrobe that would suggest the characters are from the 19th century or earlier, swords being toted around freely, but yet in this world there are also cars and motorcycles.  At any moment you expect characters to resolve their disagreements with pistols, but instead these massive swords are brought out into battle, which is fine to a point.  These fights become all the more perplexing when bullet time effects are used and involving prop elements that are CGI and only appear to be even more cartoonish as the sequence goes on.  The CGI is simply way overused throughout the film, even to give the sky an otherworldly appearance, but instead of setting a tone it just looks like bad CGI.

The film does have some strong elements, and honestly, had the film focused more of its attention on the family and their struggles to look after their rebellious son, this simply could have been a whole different film.  The parents simply want to raise their son to be a respectable member of the community, but unfortunately he is on the receiving end of abuse from the children in the village.

Of course, having a martial arts master living in your guest hut means that at some point we know the young boy will approach Dao to learn how to defend himself.  The boy idolizes Dao; after all, the boy’s father is nothing more than a baker, and a bad one at that.  But Dao isn’t trying to be anyone’s parent, and soon it’s discovered that Dao and the boy’s mother Ahn (Thanh Van Ngo) at one time knew one another.

Things do get fun once General Long (Roger Yuan), the big bad, arrives in the town. The fight sequences are fun and over the top, though at times it’s obvious there is no contact at all between the fighters.

In the end, we get a good-looking film and a sweet story about a boy and his relationship with his family, only it is surrounded by over-the-top effects and plot holes that just are not even needed in this film.  This is an example of how big effects and over-the-top action can get in the way and bring down a story that is relatable despite the culture or time period you are in.  For those fans of martial arts, try holding out for Netflix on this one.

Brent Lorentson is a horror writer and film critic based out of Tampa, Florida. With a BA in Digital Film, he co-wrote and co-directed Scavenger Hunt. His short stories have appeared in various horror anthologies. In 2019 his short script Fertile Blood will be a part of the anthology horror film Slumber Party. He is currently working on his first novel A Dark and Secret Place set to be released in late 2019. Favorite Films: Taxi Driver, Fight Club, I Saw the Devil, The Wild Bunch, Dawn of the Dead, A Clockwork Orange, Pulp Fiction, Heathers, The Monster Squad, and High Fidelity.
The Jungle Watermark (Blu-ray)