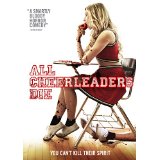 There are people who love horror films and only horror films. For these people, they can never get enough. They will look at anything and everything. There are the people who like movies about high school and sports. Then there are people who like to see hot chicks. All Cheerleaders Die wants to make everybody happy. It starts out with a girl making a student movie about the cheerleading squad. The girls on the squad show off what cool witches with a B they are since they look out for their dogs on the football team. Unfortunately, one of their routines ends tragically with the head of the squad landing on her head from a great height. This opens a vacancy on the squad which is filled by the girl who made the movie, Maddy (Caitlin Stacy from I, Frankenstein) . They all bond pretty quickly at their first big party. Another girl, Leena (Sianoa Smit-Mcphee) is trying to warn her about something but doesn’t succeed. The boys come over, but they know it’s a girls-only night, which is cool. Leena, on the other hand, is definitely not cool, because she seems to be into occult practices, but it’s hard to tell how serious she is about it. Hannah (Amanda Grace Cooper) is curious and listens to an explanation of what Leena does. Leena throws rocks on the ground which seems to be part of a witchy voodoo  practice. Leena also has very, very heavy eyeliner.

In the middle of this is the captain of the football team seeing some girl/girl kissing, making him jealous, so they imbibe on drink and smoke. He also plans on playing major head games with the cheerleaders. Things get ugly real quick and it turns into all-out war. The fighting starts out in the woods where they were partying. A car race ensues which leads a car in the river, and the only way to fix things is with black magic. So a little coven is created, and there are tensions on every side: a perfect situation for death.

All Cheerleaders Die is campy and cheesy, but not in an over-the-top way. It just embraces the high school hate-fest cliches.  It also has fun with the other girls. Martha switches bodies with Hannah (or brains if you prefer). One of the girls goes over to Larry’s (Michael Bowen from Breaking Bad) place and does freaky stuff. It probably has something to do with that car accident and Leena’s voodoo. Seems like some revenge is called for, and maybe some taste for human flesh. Some of the girls like their new life better, some don’t. Hey, everyone’s different. Time to get back to high school. The football squad is now out to prove a point, since they think the cheerleaders are dead and they don’t miss them. But they’re back. Leena keeps using her voodoo rocks since she knows that they work. Clearly mayhem and murder are imminent. Maddy is especially upset with the boys.

Strangely, there isn’t much nudity in the film, which seems odd. It teases, but just a little. It’s more interested in killing, bloodsucking and leaving behind desiccated corpses. In the meantime, lots of high school fun ensues like private time in the handicapped bathroom.

It should be obvious that this is all ridiculous. It’s fun because it is so random and off-the-cuff. Plot turns make no sense in this world, because everything is so goofy. One side effect is that all the girls feel when something is happening to one of the other girls, like when they’re drinking blood. But then we find one of the girls is hiding a big secret.

The plot twists keep coming until there is an all-out war between the football squad and the cheerleader squad. The jock is on to the voodoo and gets the upper hand. This all takes place in the cemetery, which probably wasn’t a good idea.

There is a behind-the-scenes featurette so we can get familiar with the cast and crew. Strangely, a lot of the all-American types have foreign accents.

Overall, it is fun and stupid, but stupid in a good way.