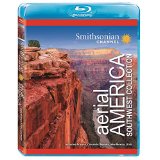 One of the miracles of modern technology is its ability to shrink the world down so you can practically (well, proverbially) hold it in the palm of your hand. The cheerily square Smithsonian Channel series Aerial America goes the other way. In fact, the best thing about the show is how it uses technology to fill every inch of your screen with some of the most famous — along with some of the more underappreciated — U.S. landmarks, employing a larger-than-life/bird’s-eye point of view most of us wouldn’t otherwise be able to enjoy.

A quick primer if you’ve never seen the show (as I hadn’t prior to popping in this Blu-ray): the series debuted in 2010, and each hour-long episode is devoted to a different U.S. state or region. Every one of those episodes is solely comprised of stunning, leisurely aerial shots of that respective state’s natural and man-made landmarks, along with a brisk history lesson courtesy of narrator Jim Conrad.

Aerial America: Southwest Collection compiles the “Arizona”, “Nevada”, “New Mexico”, “Utah”, and “Colorado” episodes into a single Blu-ray. Thanks to the vast, sometimes otherworldly landscape in that part of the country — Conrad notes that Nevada subbed in as Mars for Total Recall — this batch of episodes has an especially high cinematic quality to them. (It also helps that a lot of real-life and movie Western adventures have also taken place in this part of the U.S.)

Each episode explores at least a dozen different locations. So while it was good to learn some information and history about a few landmarks I wasn’t personally familiar with — including Arizona’s Glen Canyon Dam, or New Mexico’s Shiprock — the show never spent enough time at any one spot to make a truly lasting impact. I won’t dwell too much on the choice of which landmarks to feature in each episode because I everyone has their own idea about what’s interesting and worth spending time on. That being said, a few of the stops — including an Amazon facility in Arizona; Kevin Costner’s lavish Colorado home — seemed random and unnecessary.

Aerial America episodes don’t have any sort of narrative thread, and they forego the traditional talking-head segments. These choices have their pros and cons. On the plus side, the lack of token “experts” means there’s zero time dedicated to footage of someone chattering away and even more time devoted to showing us truly breathtaking vistas. The lack of any sort of tangible theme — beyond “all of these things exist in this particular state” — also gives the program freedom to float from one subject to the next without having to worry about excluding a certain location that doesn’t fit a theme.

The downside is the free-flowing sameness can become numbing after a while. (Especially if you happen to watch five commercial-free episodes back-to-back as I did for this review.) With no tangible story or theme to latch onto and nothing to break up the dreamy aerial shots, the show would basically be an incredibly lavish and extremely well-produced screensaver if it hadn’t been for Conrad’s ever-present narration. When you combine the narrator’s agreeable, unobtrusive voice with the serene images, this soothing, lighter-than-air program might unintentionally put you to sleep.

That being said, Aerial America still has the ability to teach and thrill. (Sweeping shots of the Grand Canyon or Nevada’s Sand Mountain hardly need any context to be amazing.) More importantly, I can’t totally crush the no-frills presentation for sitting back and letting the spectacular images do the heavy lifting.

Aerial America: Southwest Collection is presented in its original aspect ratio of 1.78:1. The 1080p image is arrived at with an AVC MPEG-4 codec at an average of 21 mbps. I’ve already used words like “stunning,” “breathtaking,” and “spectacular” to describe what you’ll see on this release, and a big part of the credit goes to this Smithsonian Channel/Inception Media Group disc. I wondered if there’d be compression issues given that 250 minutes worth of material had been crammed onto this disc, but I didn’t spot any artifacting at all. (I guess that’s the plus side of not having any bonus material.) Either way, this is a consistently vibrant, glittering presentation. It’s obviously heavy on panoramic shots, but they offer tremendous detail and sharpness at all levels. There’s not much use for black levels beyond a stop at the Vegas Strip, but whites get to shine during trips to the Salt Flats in Utah or the Colorado Rockies. Though there are some instances of aliasing, this is an impressive presentation.

The Dolby Digital 5.1 track is as pedestrian as the visual element of this release is eye-popping. You’ll notice the lack of an HD track, which is a bit disappointing. However, the track is entirely comprised of Conrad’s narration — which comes through very clearly — and the gentle, jaunty score that accompanies each episode. It might’ve been nice to get some atmospheric noise from at least some of the locations, but the soundtrack doesn’t appear to have been much of a priority here. When it comes Aerial America, the eyes have it.

The lack of special features is disappointing because I think it would’ve been interesting to get some insight into the making of this show. (And, specifically, how some of the shots were captured.)

Unless you want to feel like you’re watching a four-hour establishing shot, I don’t recommend watching these episodes back-to-back-to-back-to-back-to-back. However, I would suggest this show could make for solid family viewing. If nothing else, this particular Southwest Collection made me want to visit a part of the country I’ve never been to.