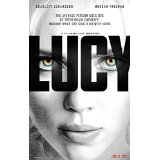 Lucy is good science fiction. Good science fiction challenges scientists to think about the possibilities. Good scientists think they don’t know and want to seek the answers and learn more. Bad scientists will tell you the answers because they know. But they don’t know. Science is made by making mistakes and learning from those mistakes and then making new mistakes and learning from them. Through that process myths and half-truths are passed along. For a hundred years science said that we only use about 10% percent of our brain, but now we are told that that was a mistake. They say we can map the brain’s electrical activity through advanced medical technology. The truth is we still don’t know much. We probably only know 10% about how the brain works. There could be endless investigation into storage capacity, the speed of connections, the purpose of electrical activity, dreams and the subconscious, perceptions, personality and self-awareness. 90% of the brain is made of glial glands which we know nothing about as opposed to the neurons which are what we try to track. There is not even a glimmer of an understanding of how to duplicate how the billions of cells interact.

Lucy has revived controversy over science like no amount of superhero movies have done. It asserts the reality of science instead of the fantasy of Superman and Spiderman. Lucy is a superhero, except she doesn’t care much about human concerns. It seems there are more important things than our petty concerns.

Lucy starts off as a moderately intelligent young woman who gets into trouble right at the start of the film. She is duped by her boyfriend into delivering a locked metal suitcase to a hotel guest.  Things proceed very briskly and entertainingly through the normal gangster troupes. Drugs are surgically implanted in her body and others to facilitate international smuggling. These drugs get in her system because of sexual abuse by her handlers in transit. The whole film is constructed to be nonstop crazy fun mixed with philosophical musings. It borrows frequently from Koyaanisqatsi and that film’s central theme of life out of balance. The film’s real central concern is the extent of human potential. Science tells us we are a product of evolution, but evolution has endless variety and a limitless horizon.

Lucy does not deal in religion or our relationship with the universe but hints at the ultimate relationship between matter and energy. Many people talk about the laws of physics as if they are concrete and immovable. The simple fact is science only deals with the observable universe. Scientist can only calculate and comment on what they can observe. There is so much we can’t observe, and so we postulate theories which can frequently be given as fact to media. Science fiction deals with what we haven’t observed and cannot prove. Some science fiction is easy to dismiss and enjoy without addressing the science, but if we look at science fiction over the centuries it often leads the vanguard in our understanding of reality.

Lucy is primarily a vibrant and fun entertainment, but it also is stirring controversy. It exposes common misconceptions but also explores new frontiers of metaphysical imaginings. It bears some similarities to Transcendence from earlier this year, but that film was a little depressing and slow for some people. Both films imagine that our evolution is in its infancy and we can jump-start advancement into unimagined regions of higher consciousness. Human beings are pretty primitive creatures after all.

Lucy is directed by Luc Besson, who has a wildly divergent filmography. He is probably best known for things like The Fifth Element, The Professional, The Transporter and La Femme Nikita. His films are usually wildly uneven, full of highs and lows. He usually has a strong female character as central to the plot. That is certainly the case here. Scarlett Johansson is stepping out front here in a big way after her turn in The Avengers and Captain America: The Winter Soldier. The Marvel universe and the DC universe are full of fun and ridiculous variations on outlandish superpowers which we accept without thought or concern. Here we are being forced to examine the actual reality of science in the equation. This forces us to think more about that actual possibilities and actualities. It’s these sorts of confrontations that force discussion and argument and ultimately, inspiration. Unfortunately, a lot of bad scientists will be crossing their arms, waving their fingers and going, “Tsk, Tsk!”

Wish I Was Here Angriest Man in Brooklyn (Blu-ray)