Posted in: Disc Reviews by Brent Lorentson on July 28th, 2014 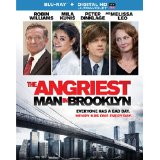 Robin Williams is one of those actors that I just wonder what happened to them.  Through the 80’s and 90’s Williams was simply box office gold with his comedic timing and great impressions, but I’ve always been more drawn to the more serious roles Williams delivered.  Awakenings, The Fisher King, Dead Poets Society, One Hour Photo, these are just a few of his roles that have stuck with me over the years that made it easy to look past his cinematic missteps.

When a movie like The Angriest Man in Brooklyn comes along, as a longtime fan I can’t help but get a little excited and hope for that spark Williams once brought to each of his characters.  Factor in you have writer/ director Phil Alden Robinson who wrote and also directed Field of Dreams, it would seem this film should have “instant success” written all over it.

It’s been a couple years since Henry Altmann (Williams) fatefully lost his son.  The once warm and caring man now goes day to day through life with a mental checklist of everything he seems to hate and makes him angry in life, and just about anything and everything sets him off.  Seeing how he verbally abuses just about everyone who crosses his path makes it all the more difficult to sympathize with him when he discovers he has had a serious brain aneurism.  Filling in for Henry’s doctor is Dr. Sharon Gil (Mila Kunis), who happens to be having a bad day herself, and after being verbally attacked by Henry, she lets it slip that he only has 90 minutes to live.  And it is with this slip of the tongue that spurs on the rest of the film to follow Henry on his quest for redemption during the final moments of his life.

As we follow these characters as they travel through New York, one is trying to find closure as the other simply wants to find her patient.  Despite having the 90-minute countdown, the sense of panic never seems to come across the screen.  If anything the film had me feeling there is no possible way any of these characters can accomplish so much in so little time.  After all, I don’t even live in New York, but just a trip to work in moderate traffic can take close to half an hour, yet but we are supposed to accept that these characters accomplish so much, and during rush hour. Is that a silly nitpicking excuse to have an issue with the film? Perhaps, but the sense of urgency is what is lacking so much here that it prevents me from buying into this concept at all.

This is one of those films that I just can’t quite figure out what went wrong precisely. Everything was in place for this film to work, but the final result simply left me cold.  With appearances by Peter Dinklage and Melissa Leo, you would think this would help elevate the dramatic scenes and make them more impactful, but still that doesn’t happen.  But the one thing that hurts this film that simply just wasn’t needed is the narration from both Henry and Sharon.  For a film that already spells itself out for us in the first 15 minutes, the added voice-over does nothing more than to add exposition that the audience doesn’t need or care about.

By the time the film comes to its inevitable conclusion, the final scene just rubbed me the wrong way.  I understand what it’s trying to convey, but like the unnecessary narration this scene just takes away from the impact of the previous sequence.  For a film that had so much promise, it’s disappointing to see how this all turned out.

The Angriest Man in Brooklyn is presented in a 1.78:1 aspect ratio.  The 1080p image is arrived at with an AVC MPEG-4 codec at an average of 26 mbps.  The visual presentation of New York looks really sharp throughout the film.  The use of warm colors and a delivery of an image that has a wide depth of field helps lend to the massiveness of the city.  During the few flashback sequences, the look doesn’t seems as saturated, but has a distinctive and drabber look.

The DTS-HD 5.1 audio track delivers more than I would have expected from this little film.  This is a very dialog-heavy film, and it is clear throughout.  Plenty of attention was paid to the mix with a robust ambient track that captures the sounds of the city.

The Making of The Angriest Man in Brooklyn: (6:17)  A very short segment that discusses how the project came together with the crew and cast discussing how great they feel the project is.

Gag Reel: (2:51) Considering this has the comedic legend Robin Williams, I’m somewhat surprised there were not more amusing bits in the segment.

For the longtime fans of Robin Williams, it’s going to be hard to resist this film.  The film is worth giving a look simply for the cast alone, but this is a bit of a disappointment.

Brent Lorentson is a horror writer and film critic based out of Tampa, Florida. With a BA in Digital Film, he co-wrote and co-directed Scavenger Hunt. His short stories have appeared in various horror anthologies. In 2019 his short script Fertile Blood will be a part of the anthology horror film Slumber Party. He is currently working on his first novel A Dark and Secret Place set to be released in late 2019. Favorite Films: Taxi Driver, Fight Club, I Saw the Devil, The Wild Bunch, Dawn of the Dead, A Clockwork Orange, Pulp Fiction, Heathers, The Monster Squad, and High Fidelity.
Lucy Contest: Win Hell On Wheels Season 3 On DVD from Entertainment One