Posted in: No Huddle by Brent Lorentson on August 4th, 2014 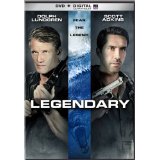 When it comes to films with Dolph Lundgren, let’s face it: you know before it even starts there is no chance of this movie having what anyone would call an “inspiring performance.” Thankfully Lundgren seems to understand the limits of his abilities and tends to stick with the run-of-the-mill action/adventure films that seem to go direct to DVD. Sure he had hits in the past like Universal Soldier, Masters of the Universe (my personal favorite), and, of course, his most famous role as Drago in Rocky IV. This week I got to check out Lundgren’s new cinematic romp and (to my surprise) I had a good time with it.

When we first meet Harker (Lundgren), he’s part of a scientific team that is hunting a giant bear. I’m not talking about your standard grizzly bear. This is a towering beast; the kind you only hear about while telling campfire tales. This scientific team specializes in discovering cryptid beasts and is led by Travis (Scott Adkins), who seems to hate everything Harker stands for. Harker could care less about the science behind the animals he’s hunting, he is simply in this for the bragging rights of saying he slayed this cryptid beast. Things, of course, go wrong while hunting the bear, and the rivalry between Travis and Harker only intensifies.

It’s when there is a discovery of a giant lizard wreaking havoc on a small village that Travis and his team get the call to travel to China and investigate. Unfortunately, Travis and his team are not alone; the owners of a construction group have hired Harker to track and kill the best before it causes any more damage or kills anyone.

If you thought this seemed like a SyFy original movie, well you wouldn’t be too far off.  But thankfully this movie does actually attempt to tell a story, even if it may be a retread of many monster films of the past. What makes this film fun to watch is the rivalry between Harker and Travis. Both of these characters are written to very extreme levels, but it’s the low key performances by both actors that keep these roles from feeling too over the top.

As for how the monster looks, well when you factor in the smaller budget, this is actually a cool looking monster. It has several moments throughout the film where it gets to cause some enjoyable mayhem. My favorite scene took place on a lake where the science team performed a night investigation and you just knew something was about to go horribly wrong.

What hurts the film is, of course, not having the budget to let this monster shine and destroy to its full potential. Thankfully, everyone involved with the film puts in a solid effort and instead makes the best use of the few moments we do actually get to see this monster in action. Legendary, like many monster films before it, is an allegory showing how man can often be a greater monster than the mythic beasts we speak of in hushed tones while sitting around the fire. It’s these kinds of tales that are kind of hard to ever get tired of, despite how often we see it in literature and film. And despite how many renditions of this concept we see produced, it will continue to draw in viewers of all ages.

In the end, though, the film doesn’t offer up much in the way of originality. It’s still one of those films that, when you’re stuck awake late at night, makes for some brainless entertainment to fall asleep to. And that’s fine by me.

Brent Lorentson is a horror writer and film critic based out of Tampa, Florida. With a BA in Digital Film, he co-wrote and co-directed Scavenger Hunt. His short stories have appeared in various horror anthologies. In 2019 his short script Fertile Blood will be a part of the anthology horror film Slumber Party. He is currently working on his first novel A Dark and Secret Place set to be released in late 2019. Favorite Films: Taxi Driver, Fight Club, I Saw the Devil, The Wild Bunch, Dawn of the Dead, A Clockwork Orange, Pulp Fiction, Heathers, The Monster Squad, and High Fidelity.
Guardians Of The Galaxy Contest: Win Jesse on DVD From Arc Entertainment