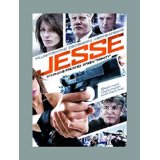 Arc Entertainment decided to turn up the heat this summer, and they want Upcomingdiscs readers to share in the action. They’ve sent over 3 copies of Jesse on DVD for us to give away. This one’s got it all: corrupt cops, mafia guys and Stephanie Finochio in the middle of it all as Jesse, a rather troubled cop. The film also stars Eric Roberts, William Forsythe, and one of my favorites, Armand Assante.

Gino Sassani is a member of the Southeastern Film Critic's Association (SEFCA). He is a film and television critic based in Tampa, Florida. He's also the Senior Editor here at Upcomingdiscs. Gino started reviewing films in the early 1990's as a segment of his local television show Focus. He's an award-winning recording artist for Omega Records. Gino is currently working on his 8th album Merchants & Mercenaries. Gino took over Upcomingdiscs Dec 1, 2008. He works out of a home theater he calls The Reel World. Favorite films: The Godfather, The Godfather Part II, The Body Snatcher (Val Lewton film with Karloff and Lugosi, not the pod people film), Unforgiven, Gladiator, The Lion King, Jaws, Son Of Frankenstein, The Good, The Bad And The Ugly, and Monsters, Inc.
Legendary Divergent (Blu-ray)