Posted in: No Huddle by Archive Authors on August 14th, 2014 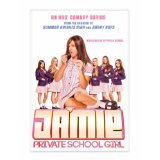 When I first saw the title, Ja’mie: Private School Girl, I thought, “Cue the bow chicka wow wow music.” Did I have it wrong. What came to mind after looking at the DVD cover instead was more, “Dude Looks Like A Lady.”  To some Ja’mie may be the hottest, funniest chick to prance across the screen since Divine or Candy Darling. To others, she may be an unbearable, annoying train wreck to watch.  Ja’mie: Private School Girl is a spinoff show based on a character created by popular Australian comedian, Chris Lilley. Ja’mie was featured in Mr. Lilley’s other two shows, We Can Be Heroes and Summer Heights High. Not only does Chris Lilley play the lead role, Ja’mie, but he also wrote this documentary spoof. Seems any time someone writes and stars in a production, it’s nothing short of a narcissistic disaster. Ja’mie: Private School Girl, in my opinion, is no exception.

Season One of this six-show series centers on Ja’mie’s last three months attending Hillford Girls Grammar School. Ja’mie considers herself to be a mother hen and the girls at the school her little chickens. The show is peppered with plenty of f-bombs, teenage crushes, girl fights, being embarrassed by the parents, sibling rivalry, a party, cheap sex jokes, sexting, discriminatory remarks, lesbians, and dance moves that reminded me of a butterfly having a seizure while getting electrocuted by a bolt of lightning.

There is also a creep factor to this series. For starters, you have a middle-aged man playing a high school girl, Ja’mie. Maybe it would be funny if the character wasn’t hanging around actual high school girls, constantly over-applying lip gloss, unbuttoning her/his dress, talking about her/his breasts or more like lack thereof, and gyrating his crotch on a crush, named Mitchell (Lester Ellis, Jr.) every chance she/he got.  Even creepier, anytime Ja’mie wants something from her father, she nibbles on her dad’s shoulder. Yuck. I found that highly disturbing and not funny at all. I realize this is a spoof, but come on, that type of behavior is borderline “hitting on your dad” for gosh sakes. Most times when a daughter wants something from her dad, she simply pouts or cries, not nibbles on his shoulder in a mildly-seductive manner. Again, yuck.

I found Ja’mie’s relationship with her mother rather upsetting too. I realize that teenagers are supposed to treat their parents like crap and be ashamed of them. I get that part of it. And done properly, it can be a funny scripted scene. However, in this show, I believe it was abuse. Not only was the character Ja’mie flat rude to her mother, she was downright abusive. There was nothing funny about the looks the mother gave when being scolded by her daughter for doing something as simple as bringing food out to a table at the party. She appeared to cow down like an abused victim waiting to be hit. Not funny.

The music played throughout the show was surprisingly tasteful. Great rock tunes and a few unfortunate auto-tune tracks too, which met the fate of the mute button. I enjoyed the show’s theme song the best. The bonus feature shows how the theme song was put together in the recording studio. Pretty neat to watch how it all came together, from the composing to the recording of the various instruments.

The location shots chosen were nice. I also appreciated that most of the actors in the film were not professional actors, but kids selected from actual private schools. I believe this was a smart way to go for a “mockumentary”. It gave the show a reality feel, even though it was obviously scripted and completely fake.

The behind-the-scenes features are the best part of the entire DVD. You get to see how various scenes were filmed. How the actors rehearsed in a warehouse before filming even began. How the car scenes with Ja’mie, her sister, mom and friends were filmed while the car was moving. How the computer chat sessions between Ja’mie and Mitchell happened and how the set designers designed the set for Ja’mie’s big party. You also learn why the location team chose the house they did for Ja’mie’s family to live in…especially the swimming pool. Lots of really interesting stuff, if you are into the “how it’s made” part of a TV show.

Throughout Ja’mie: Private School Girl, I had to keep in mind that what is considered funny in one country or culture may not be so funny in another. If you are into overly exaggerated “mockumentary” shows, then you might find this one to be a great add to your collection. I personally found it to be obnoxious, disturbing and downright crappy – in both writing and acting. But to each his own.