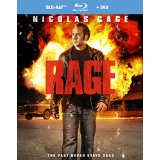 At this point in his alternately mocked and celebrated career, Nicolas Cage starring in a movie called Rage seems redundant. (Especially since “Rage” would be a much more eloquent title for this classic YouTube video.) Yet here he is starring in what looks like a Taken ripoff…until you realize he already starred in a Taken ripoff two years earlier. To its credit, Rage does appear to want to say some interesting things about the way secrets refuse to stay buried and the perils of resorting to violence. Unfortunately, the film often takes the most misguided and clichéd avenues to get there.

Cage stars as Paul Maguire, a criminal-turned-successful businessman with a pretty younger wife named Vanessa (Rachel Nichols) and a daughter named Caitlin (Aubrey Peeples) who is about to turn 16. While Paul and Vanessa are out to dinner one night, they get unsettling news: a group of masked men broke into the couple’s house and assaulted Caitlin and her two friends (Max Fowler and Jack Falahee). The bruised boys inform Paul that Caitlin has been abducted.

Paul rounds up his two best shady friends (Max Ryan, Michael McGrady) and makes a mental list of past enemies who could’ve done the deed. As he prepares to cut a violent swath through the list of suspects, Paul ignores the advice of a detective (Danny Glover) with whom he shares 20 years’ worth of history, and the mob boss (Peter Stormare) who allowed him to go legit in the first place. (This wouldn’t be much of a thriller if Paul simply sat by the phone hoping for good news.)

Rage is the English-language debut of Spanish director Paco Cabezas, and the movie does offer a few satisfying swerves that unfold in stylish ways. Unfortunately, those stylistic flourishes are also at odds with some of the loftier ideas in the referential, junky screenplay by Jim Agnew and Sean Keller. (The list of superior movies Rage mimics is too extensive to list.) At one point, Paul’s #1 suspect — a Russian mobster named Chernov (Pasha D. Lychnikoff) who was ripped off by Paul and his two friends nearly 20 years earlier — bemoans the fact that “blood and confusion” rule the day and fondly recalls a time when words were exchanged before gunshots.

I’d be more likely to believe the movie’s point about how violence isn’t the answer if Cabezas hadn’t, say, fetishistically staged certain sequences — including Caitlin’s abduction — as over-the-top/slo-mo violent operas. (Or if he didn’t seem quite so eager to break out the jittery camera work during foot chases.) At least in terms of trying to make his movie exciting, it seems like Cabezas decided cool-looking violence *was* the answer.

The relatively straightforward thriller structure doesn’t allow Cage to be as interesting as he can be. Once Paul goes into “man on fire” mode, it’s mostly a poker-faced, monotone performance broken up by a couple of bouts of vintage Cage craziness. (At one point, Paul wildly empties a clip into a guy he’s already killed.) I actually think I liked Cage better early on, when he was playing protective dad and projecting as much menace giving his daughter’s love interest the third degree as he did when Paul starts killing people.

Glover gives another variation of the weary, “I’m too old for this s—“ performance that made him famous. (And his detective gives Paul a ridiculous amount of leeway in the movie’s most absurd moment.) On the other hand, it was nice to see Stormate get to play some low-key, emotional beats after a career largely spent playing psychos. Nichols’ character had potential early on — maybe Vanessa isn’t totally turned off by Paul’s past — but is largely relegated to sitting at home fretting once the bullets start flying. Peeples also makes a nice impression in her relatively brief screen time.

Rage does vividly show the consequences of misguided bloodlust. The problem is the movie also revels way too much in clichés and the “blood and confusion” it ostensibly condemns to effectively make its point.

Rage is presented in an aspect ratio of 2.35:1. The 1080p image is arrived at with an AVC MPEG-4 codec at an average of 23 mbps. The film opens with a striking, extreme close-up of Cage’s green eyes, which are rendered with extraordinary detail. Besides that, this is an exceedingly solid, not-quite-spectacular HD presentation courtesy of Image Entertainment. Both the budget (north of $20 million) and the production values (cinematographer Andrzej Sekula also shot Reservoir Dogs, Pulp Fiction, and American Psycho) are higher than you’d expect. Even though this is a dark thriller, there’s more brightness and clarity than you’d expect thanks to the movie’s Mobile, Ala. setting. That being said, the movie exhibits nice grit and texture once Paul dives back into the criminal underworld. Black levels are strong but never inkier than whenever we see Cage’s unnaturally dark hair.

The DTS-HD Master Audio 5.1 track is, not surprisingly, at its liveliest and most aggressive during shootouts and the film’s car chase sequence. The subs throb as much for the dramatic thunderstorm during the night of Caitlin’s abduction as they do for the generically pulsating score by Laurent Eyquem. The track, however, is also surprisingly restrained during quieter scenes, offering subtle atmospheric/background noises that make the more booming action set pieces stand out. Dialogue also comes through well enough in this nicely-balanced, thoroughly effective track.

The Making of Rage: (5:18) This is comprised of three micro-docs — Behind Rage, Directing Rage, and Nicolas Cage in Rage — that examines the collaborative process between Cage and Cabezas, who was making an American film and working with a movie star for the first time. In discussing the movie’s themes, Cabezas talks about injecting heart and soul into the thriller genre. However, these featurettes are way too short to explore that notion (or anything else) with any depth. Features a Play All option.

Deleted Scenes: (15:01) These five scenes actually offer up interesting material, including an alternate opening that more directly references the event in Paul’s past that comes back to haunt him in the present. (The quality of the flashback footage does noticeably clash with the bits from the polished theatrical cut.) I’m not sure the inclusion of more flashbacks would’ve been an improvement since they might have slowed the film’s momentum, but I like that they are included on this disc. Features a Play All option.

So much for Joe signaling a return to more serious roles for Cage.

Rage may have turned out to be another junky thriller in the end, but I can at least see the engaging ideas that probably attracted Cage to the project.