Posted in: No Huddle by Brent Lorentson on August 14th, 2014 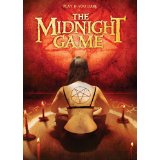 I’m a sucker for a good urban legend.  Growing up, friends and I would dare one another to lock ourselves in the bathroom with candles and perform the “Bloody Mary” chant, and other times we’d pull out the Ouija board and attempt to communicate with the otherworldly spirits that seem to only want to talk during the midnight hour.  Well, now there is a new game that you and your friends can get together and play into the late night hours, that is if you’re willing to risk losing your life in the process. The Midnight Game has managed to go viral with numerous posts online as well as videos of those willing to play the game and risk a confrontation with the Midnight Man.

When Kaitlan’s (Renee Olstead) family leaves her alone for the weekend, she seizes the moment to have her best girlfriends; Rose (Shelby Young) and Jenna (Valentina de Angelis) come over to keep her company.  Even though her mom insists on no boys coming over, everyone knows that this is a rule that inevitably will be broken.  It doesn’t take long for the boys to arrive; they turn out to be your generic jocks Shane (Guy Wilson) and Jeff (Spencer Daniels).  Thankfully, not a lot of time is wasted setting up these characters, and the filmmakers were smart to simply allow the characters develop over the course of the film, but the absolute best decision was to have the characters simply discuss their fears with one another.  So much is expressed about these characters in this reveal; even the things not said by the characters say enough to get us to understand them.

From discussing their fears, Shane decides to tell the group about The Midnight Game.  Since the group has been drinking and no one seems ready to head to bed, we know that the inevitable next step is for this group of friends to play the game.  After all, what’s so difficult about keeping a candle lit from midnight till 3:33?  I don’t want to reveal much about how the game is played or what happens if the candle goes out and you can’t get it relit in ten seconds; after all, that is all part of the fun of the film.

What surprised me most about this film is how it manages to be creepy and effective throughout.  This isn’t a multi-million-dollar production where money was simply thrown at creating horrifying effects; instead it depends on the performances, the story and the sound design to deliver its scares.

As the story unfolds into the latter half of the film, I appreciate that it doesn’t exactly spell things out for the viewer and instead has us experience what is occurring alongside the characters.  We know something isn’t right, but just what is amiss is left for us to stew over till the end.

This is one of those films that sneaks up on you. When I put it on I didn’t expect much, but I ended up having a blast with this film.  It so easily could have been a found-footage film and fallen into the trap of simply being a retread of every other urban legend film out there.  Instead we get a film that dares to take a risk and present itself as a straightforward horror film that I couldn’t help but feel seemed to embrace the atmosphere as you’re used to seeing in some of the old Vincent Price films like House on Haunted Hill.  Not to imply that The Midnight Game is on par with that classic, but simply it was nice to see the film embrace its simplicity and atmosphere.

The next time you have some friends over and you’ve shared some drinks, this is one of those films worth putting on, and I’m pretty sure if you still have time you’ll be wanting to play a round of The Midnight Game, at least for those brave enough to play and stay awake; just remember not to let your candle blow out.

Brent Lorentson is a horror writer and film critic based out of Tampa, Florida. With a BA in Digital Film, he co-wrote and co-directed Scavenger Hunt. His short stories have appeared in various horror anthologies. In 2019 his short script Fertile Blood will be a part of the anthology horror film Slumber Party. He is currently working on his first novel A Dark and Secret Place set to be released in late 2019. Favorite Films: Taxi Driver, Fight Club, I Saw the Devil, The Wild Bunch, Dawn of the Dead, A Clockwork Orange, Pulp Fiction, Heathers, The Monster Squad, and High Fidelity.
Star Trek: The Next Generation – Season 6 (Blu-ray) Perry Mason Movie Collection Volume 3