Posted in: Disc Reviews by Gino Sassani on August 12th, 2014 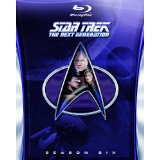 The sixth season of Star Trek: The Next Generation is arguable one of the best seasons in the history of the franchise. There are likely many reasons for this. I think the most likely has to do with Rick Berman. He had moved his attention over to Deep Space 9 and had left the day-to-day running of Next Generation to others. Most notable of the others was Jerri Taylor, who moved up to take control of both the writer’s room and casting choices. Both showed remarkable improvement under her leadership. She’s credited with the “graying” of Starfleet, insisting that there be more guest stars over 30. She also insisted that stories stop using some of the same gimmicks. As a result, this is the only year in Star Trek history where a starship malfunction did not lead to the crises of the week. She would hold brainstorming sessions at her home on Sundays and was more open to tie-ins with the original series. This, of course, led to Relics, in which James Doohan returns as Scotty, and it became the third highest rated episode of Star Trek in franchise history. The season was so successful in the ratings that it beat that year’s World Series, which led to a two-page spread in the trades from Paramount with the tag line: “Baseball’s World Series lost to our worlds series”. The truth was Trek didn’t just beat it. It was a blowout. Trek brought in 23% more viewers during that time period than the games. Trek was at an all-time high in popularity. The merchandising had just crossed the $2 billion mark, and the sky was literally the limit.

The season was perhaps also helped by the fact that there were only two Guinan appearances, and none from Troi’s mother.

Other changes in staff brought out the best in the series. David Livingston became supervising producer on both shows. Peter Lauritson became a producer, and Merri D. Howard went from a unit production manager to line producer. Associate producer Wendy Neuss lost the “associate” designation and became a full co-producer on the series. With f/x guru Rob Legato moving to DS9, it opened up that spot to Dan Curry, who did incredible things with the f/x of the show. All of these changes were for the best, and that was most important this sixth season. There were many elements going against the series.

The cast had all only signed six-year contracts, and so there was a very real chance this would be the final year of the show. In an unprecedented accomplishment, the quality of season 6 inspired every member of the cast to return for that seventh year. The show was also now competing with another Trek show. For the first time ever there were now two Star Trek shows on the air and there was a very real chance of oversaturation. Finally, this was the first year without The Great Bird Of The Galaxy to help guide his dream along. Gene died the year before. With all of these things going against it, it would have been so easy to just coast to the finish line. Lucky for us, they did just the opposite.

Sure, there were a few stinker episodes in season six. Aquiel, Face Of The Enemy, Lessons, The Chase and Frame Of Mine come to mind. But there were some absolutely great episodes in this set.

Relics: The crew finds a damaged ship on the outside of an engineering marvel called a Dyson Sphere. They discover the transporter is still active after decades. They complete the beam sequence, and out pops everyone’s beloved engineer Scotty. He was studying the sphere when the ship crashed. He quickly came up with the idea to use the transporter as a lifeboat. It didn’t help his friend, but it brings Scotty on an emotional ride to the new Enterprise and a fine moment in the holodeck where he sits drinking in his old ship. It’s one of the best episodes of the entire franchise and worth the cost of this release alone just to have in high definition.

Chain Of Command: This two-part episode provides Patrick Stewart with some of his best work on the series. Picard is relieved of his command so that he can train and carry out a secret mission for Starfleet in Cardassian space. It’s a trap, and he’s captured by a ruthless Cardassian, played wonderfully by David Warner. He’s tortured both physically and mentally. Meanwhile, Ronny Cox guest stars as the intermediate captain of the ship. He isn’t a fan of Riker’s and runs a tighter ship than Picard did. Some of the show’s best acting performances can be found here.

Ship In A Bottle: Finally the Holmes rights issues were cleared up, and it led to a return of the sentient Moriarty holodeck character. He’s grown impatient and wants Picard to deliver on his promise to find a way for him to leave the holodeck and live a life. It’s another wonderful performance by Daniel Davis and another great game of wits worthy of Doyle himself.

Tapestry: It’s the only Q episode that does not feature the character’s name in the title. It is also one of the best episodes to feature Q. I’ve always been a huge fan of John De Lancie and this character. Here Picard is killed because of his artificial heart. We learn he got it in a fight with a nasty race of Predator-like Nausicaans. Q offers him a chance to fix that moment of regret only to discover that it made him a very different man than he used to be. Picard realizes that he wants to be the man he once was. The best part of the episode is that it’s cleverly written so you never really know if Q was ever really there or if it was a delusion from his injuries.

Birthright: This is another two-part episode that sends Worf looking for his father. A denizen of Deep Space 9 offers him information that his father is still alive in a secret Romulan POW camp. What he finds is a situation that forces him to face what it is to be Klingon and a free man. Braga admits that he was partially inspired by the film Bridge Over The River Kwai, and there are some moments that are obviously meant as an homage to that classic film.

Starship Mine: OK, so this isn’t a particularly original episode. It’s Die Hard on the Enterprise. It’s another great opportunity for Stewart to shine. It also is a wonderful case in point for my old argument that what makes Star Trek so unique and good is that you can tell any kind of story here. Picard must face off against aliens who are aboard a ship that was evacuated for a maintenance deadly ray sweep. They want to steal antimatter to sell to terrorists. The Die Hard beats are impossible to miss: crawling through vents and antagonizing the bad guys with one of their communicators.

Rascals & A Fistful Of Datas: These aren’t great episodes, but both deliver those humor beats that were also an essential part of the original show. In Rascals a transporter mishap causes Picard and others to become children just as a group of renegade Ferengi try to take over the ship. David Tristin Birkin deserves credit for his wonderful job of emulating Stewart’s mannerisms. The episode was one of several directed by Adam Nimoy, son of Leonard. A Fistful Of Datas has Data dominating a wild west program where Worf is trying to spend some quality time with Alexander. Data inadvertently causes every character to become him and puts the father and son in jeopardy. These light moments add color to the season, even if they’re really quite silly.

Descent: The season finale is another cliffhanger which brings back Data’s evil twin brother Lore and follows up on the story of the Borg Hugh. It’s an episode about consequences that also stars real-life genius Stephen Hawking in a holodeck poker game where Data is playing against Hawking, Newton and Einstein. It came about because Hawking was a vocal fan who was hoping to be involved in some small way. This episode would conclude as the seventh and final season opens.

The episode is presented in its original full-frame aspect ratio. The 1080p image is arrived at with an AVC MPEG-4 codec at an average 25 mbps. The image is sharper than it has ever looked for this series. Colors have a rich texture that I found quite impressive, particularly the deep reds and blacks of the new uniforms. This episode takes advantage of the image’s texture. The Romulan culture has a texture of its own, and it shines here. Because the episode stands alone, the bit rate is high and quality is superb.

All of the “Mission Archives” from the DVD remain, including a wonderful 30 minute tribute to Gene himself.

The final disc contains a three-part new feature in high definition: Beyond The 5 Year Mission – The Evolution Of Star Trek: The Next Generation.

Part 1 – The Lithosphere: (24:50) This segment deals mostly with Deep Space 9. It features a lot of 1990’s interview clips of Merman and Pillar. It seems this one should have been used when DS9 comes to Blu-ray.

Part 2 – The Biosphere: (29:31) This one focuses on the writers and some of the production crew. There’s f/x footage and talk of some of the changes in production design.

Part 3- The Noosphere: (29:59) Here the cast get to offer their thoughts, once again. Guests like John De Lancie are prominent here, as well. It’s a lot of stuff we’ve heard before but it was interesting to hear Patrick Stewart reveal just how much he loves doing laundry.

I can’t stress enough just how important this season of the show was. At least some cast members would have bailed if it hadn’t been so strong. There had already been rumblings that Stewart wanted out and that casting nets were actually started to find a replacement. A strong season only brought them closer together and fed the fury for a seventh season that would go on to become somewhat of a tradition for most of the shows that followed. The show has been gone from the airwaves and our silver screens for a while now. But there’s just something about those shows that refuses to die. These Blu-ray releases are life events. A lot of creative people gave their all to put it on screen. That was a long time ago. The show is dead. “Welcome to the afterlife.”

Gino Sassani is a member of the Southeastern Film Critic's Association (SEFCA). He is a film and television critic based in Tampa, Florida. He's also the Senior Editor here at Upcomingdiscs. Gino started reviewing films in the early 1990's as a segment of his local television show Focus. He's an award-winning recording artist for Omega Records. Gino is currently working on his 8th album Merchants & Mercenaries. Gino took over Upcomingdiscs Dec 1, 2008. He works out of a home theater he calls The Reel World. Favorite films: The Godfather, The Godfather Part II, The Body Snatcher (Val Lewton film with Karloff and Lugosi, not the pod people film), Unforgiven, Gladiator, The Lion King, Jaws, Son Of Frankenstein, The Good, The Bad And The Ugly, and Monsters, Inc.
Locke (Blu-ray) The Midnight Game