Posted in: No Huddle by Archive Authors on August 17th, 2014 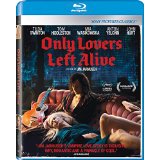 Vampires have been popular since Bram Stoker and Sheridan Le Fanu started writing about them nearly 200 years ago, but vampires have been around much longer than that. That seems to be how the story goes. That’s part of the problem. In Only Lovers Left Alive, it’s difficult for a vampire to overcome his boredom and disappointment with “zombies”, as he calls the human mortals. These vampires try to subsist on blood banks. Not only is it more humane, but that way they know the blood is tested. They don’t like blood-borne pathogens. Jim Jarmusch makes his own kind of movies that no one else makes. He is one of the last directors working in Hollywood who hasn’t sold out, partly because he never has worked in Hollywood. He’s too cool to sell out. That’s why he’s made a vampire movie no one else could have made. It has a great cast, because all the cool actors would love to be in a Jim Jarmusch film. Tilda Swinton played the angel Gabriel in Constantine. Tom Hiddleston is Loki in the Marvel universe in movies like Thor I, Thor II and The Avengers. Anton Yelchin is Chekov in Star Trek and was fighting vampires recently in Fright Night. Mia Wasikowska was Alice in Wonderland, and that movie literally and truthfully made over a billion dollars. Jeffery Wright and John Hurt are two of best actors alive, so look that up. Bill Murray and Johnny Depp have starred in Jim Jarmusch movies for no other reason than that he asked them. If you haven’t seen a Jim Jarmusch film by now, you’re probably not ready to see one. Go spend a few years in the East Village to prepare yourself.

All that said, Only Lovers Left Alive is a luxurious and enjoyable experience. Our main vampire, Adam (Hiddleston) is a reclusive rock star who lives in a ramshackle mansion in a deserted Detroit neighborhood. He rarely leaves the house, and his needs are mostly tended to by a spacy groupie, Ian (Yelchin). He labors over music with equipment he has cobbled together over the years. His electricity is furnished by generators based on the principles of Nikola Tesla. He gave away some music to Hayden many, many, many years ago. He shows up at a hospital blood bank unannounced to buy from Dr. Watson (Wright). That is basically his life. He recently got Ian to procure a bullet made out of one of the densest woods imaginable. Just one bullet.

His wife, Eve (Swinton) lives in Tangiers. She loves him very much, but it seems that she understands he needs his space. Eve gets her blood from Christopher Marlowe, the Christopher Marlowe (Hurt), who lives near her in the evocative streets of Morocco. When these elegant vampires have their blood in little aperitif glasses, they lay back in orgasmic ecstasy. It is clearly a pleasure beyond our understanding.

Eve decides it’s time for a visit and books the elaborate night flights that are required to get from Tangiers to Detroit. Vampires always have lots of money, which is never explained, but I don’t find that hard to understand without explanation. They could get it any number of ways and then just let the interest compile over the centuries.

Eve has developed a different philosophy from Adam over the centuries. She sees love of all living creatures and nature as the ultimate goal in life. Both Adam and Eve have innate understanding of so many things beyond ours. It is as if they actually know what is going on somewhere halfway across the universe. They say as much in one of their conversations. Eve’s sister Ava (Wasikowska) shows up unexpectedly. Ava is an eternal adolescent and is impish and impulsive. She sets in motion a series of events that are somewhat inconvenient.

Only Lovers Left Alive is a vampire movie unlike any other. Many people will not be prepared for its languorous, witty, insolent tone. In some ways, it may be the best vampire movie ever.

The Expendables 3 The Blacklist: Season 1