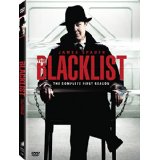 “He’s dangerous, amoral, he pathologically flaunts authority. He’s reckless to the point of suicidal. But all of this… everything we’ve done. None of it would have been possible if it weren’t for him.”

Him, of course is James Spader as the enigmatic Raymond “Red” Reddington. The show is NBC’s break-out hit The Blacklist created by first-time show-runner Jon Bokenkamp. Bokenkamp is truly a newcomer to the business. He has literally only a couple of very minor writing credits to his name. Perhaps that’s why The Blacklist is able to contain quite a few of the cliché elements running through television today and still feel like one of the freshest shows in a long while. Or maybe it’s really Spader.

“It’s called the blacklist. That sounds so exciting!”

Spader plays Reddington. He’s a guy who’s been #4 on the FBI’s most wanted list for over 20 years. He’s both a master criminal and spy. He’s sold secrets to foreign governments and made a worldwide reputation for himself as the “Concierge of Crime”. Needless to say, he’s been elusive and would make the career of anyone who could bring him down. No one’s going to get that chance. Suddenly and without warning he waltzes into FBI headquarters and turns himself in with the kind of casual calmness that you or I might make checking out at the local grocery store. He professes to have intimate knowledge of a huge crime about to occur. He’ll share that knowledge and his exclusive list of master criminals that the FBI doesn’t even know exists (the titular blacklist) in exchange for immunity. And he’ll only deal with Agent Liz Keene, played by Megan Boone.

If you think the FBI is surprised, image how Liz Keene feels. It’s her first day on the job. She’s living a normal life by all appearances. She’s happily married to Tom Keene (Eggold), and they’re working to adopt their first child. What could be more mundane? She has no idea who Reddington is or any knowledge of his world. That is until the helicopters and squad cars show up on her front porch as she leaves for that first day of work. He’s been waiting for her, but no one seems to know why. There isn’t going to be much time to ponder any of these questions. She’s going to hit the ground running, suddenly the central figure in a black ops task force put together to deal with Reddington’s list.

The head of the task force is FBI Assistant Director Harold Cooper, played with an uncertain but firm authority by Harry Lennix. Cooper is a go-getter, and while he’s skeptical of Reddington’s motives, he’s all about the lives the information is going to save.

The closest thing to a partner for Liz is Agent Donald Ressler, played by Diego Klattenhoff. Ressler is the typical no-nonsense agent who resents the attention Liz is getting. He’s a hard-working agent who doesn’t respect her because she hasn’t paid any dues. Of course, he learns to respect her as the season develops, and this evolution of both his character and their relationship is a fresh change from the kinds of cardboard characters who don’t evolve much over a season… or even a long-running series. Ressler learns deep personal loss during the season and will become harder, more willing to cross those legal lines by the end of the season.

Agent Meera Malik is played by Parminder Nagra. Malik is CIA and was brought into the taskforce to keep the operation “honest” and report to her superiors in the Justice Department. That makes it hard for the team to trust her, as her purpose there is no secret. But her expertise in covert ops and counterintelligence is vital throughout the season. She also ends up earning the team’s respect. Unfortunately, she’s underused and one of the best characters on the series. She’s a combination of NCIS‘s Ziva and The Good Wife’s Kalinda.

Every one of these kinds of teams needs that tech wizard guy. You know the kind. He/she can hack into anyone’s system and knows all that catchy geek lingo that makes them sound cool to the others. In The Blacklist that role falls to Aram Mojtabai, played by Amir Arison. He’s not the typical geek guy on this show. Yeah, he’s got the ridiculous/unbelievable skills, but he’s not the eccentric, socially awkward character that usually dominates this position. In fact, he looks and acts the most like a straight-laced FBI guy of anyone on the show. Just another area the series manages to give us stuff we’ve seen a million times before but with just enough unique elements to make it new.

Of course, the standout performance here is James Spader. Red isn’t unlike the lawyer he played on Boston Legal and The Practice. He’s got that same cocksure attitude and a rather offbeat, irreverent sense of humor. The real difference is that Red is not a good guy at all. He may be helping save lives here, but there’s never any doubt that he’s serving his own agenda here throughout. He’s also eager to be close to Liz, and we know there’s more to their connection than meets the eye. He’s also a brutally violent man. He kills without flinching and with very little provocation. He’s the kind of character that could not have existed on television before the likes of Tony Soprano or Vic Mackie. Spader pulls this complicated personality off flawlessly. He’s like that car wreck. You just can’t keep from looking. The character and performance are powerfully compelling. Once you do look, it’s near impossible to look away. He can keep your attention during even the most ordinary of tasks. Perhaps it’s our own survival instinct. In real life he’s the kind of guy you can’t afford to take your attention from for even a second. Some of the character was based on real-life FBI wanted criminal Whitey Bolger.

Each week the team is introduced to another person on Reddington’s blacklist. The episode titles refer to the name of the criminal and a number which corresponds to their place on the list. The criminals are the kind of people who keep other criminals in business, usually providing a vital service to the underworld. Reddington knows these people through his own 20-year criminal activities. They’re so good at their jobs that most of the time the law doesn’t even know a crime was committed, let alone who committed it. High-tech erasers, assassins, genetic manipulation, explosives and terrorists.

To make these unique criminals come to life, the show has attracted some of the best television talents out there to portray these rather odd people. Some of the best guest performances include Tom Noonan as The Stewmaker. He makes people disappear by immersing them in chemical compounds that turn them into stew. He plays the character with almost no dialog. It’s a deadpan, unemotional man who goes about his job rather methodically. Prison Break’s outstanding actor Robert Knepper is The Courier. He transports what you need inside of gashes on his body. He’s able to do this because he suffers from a disease where he can not feel pain. It’s a condition Ressler has to replicate when he tries to pass as The Courier undercover. Frank Whaley stars as The Good Samaritan. He’s an avenging-angel serial killer who calls the cops after each kill to give his victims a chance to get help in time. Of course, they never do. Alan Alda has a recurring role of a shadow figure of power. He has an uneasy relationship with Reddington. His “board” wants to kill him, but he has “stuff” on them that will surface if he dies or disappears. I suspect we’re going to find out more about him in seasons to come.

The best episode of the year is the two-part affair called Anslo Garrick No. 16. Anslo is a brutal guy who wants Reddington so much that he puts a siege on the Post Office to get him. It’s a rather intimate episode as the characters deal with the intrusion. Reddington and Ressler are trapped in a panic room where Ressler is badly injured. Spader shows a completely new side of the character here. One that’s not so sure and confident. There’s a moving scene where he tells Ressler of some of the reasons he wants to live. It’s an incredibly touching scene and one you just wouldn’t have thought this character was capable of. The episode is also a series game-changer. From this point on Reddington is also trying to track down the mole inside the FBI that allowed the siege to take place. He’s ruthless in his pursuit to the point of obsession.

As if all of this criminal activity wasn’t enough, along with Reddington’s various ulterior motives Liz is faced with a husband who might not be who she always thought he was. The betrayal will act not only as an important plot point for the show but a great emotional evolution for Liz and something that will actually help to create a bond between her and Reddington.

The final episodes lead to a thrilling conclusion that answers many questions but does a good job of setting up even more questions for next season. It’s not exactly a cliffhanger, but it does set up some interesting situations. Don’t get too attached to the cast, as at least one of them will not survive to return next season. You’ll just have to watch to find out who.

The show sports amazing production values, and I’m a bit disappointed that Sony didn’t send it to us in Blu-ray to review. I suspect that the exotic locations and action set pieces would have looked quite nice in high definition. Instead we looked at the DVD set which contains all 22 episodes on five discs with a five-minute behind-the-scenes segment for each episode, a few commentary tracks and deleted scenes for select episodes.

This show is one of the most exciting on television right now and should not be missed. If you haven’t seen it, you have time to get the set and catch up before the show returns in September. Even if you have seen them, you won’t want to pass on an opportunity to give them a second look. With a show like The Blacklist, you know “there’s always more to the story”.

Gino Sassani is a member of the Southeastern Film Critic's Association (SEFCA). He is a film and television critic based in Tampa, Florida. He's also the Senior Editor here at Upcomingdiscs. Gino started reviewing films in the early 1990's as a segment of his local television show Focus. He's an award-winning recording artist for Omega Records. Gino is currently working on his 8th album Merchants & Mercenaries. Gino took over Upcomingdiscs Dec 1, 2008. He works out of a home theater he calls The Reel World. Favorite films: The Godfather, The Godfather Part II, The Body Snatcher (Val Lewton film with Karloff and Lugosi, not the pod people film), Unforgiven, Gladiator, The Lion King, Jaws, Son Of Frankenstein, The Good, The Bad And The Ugly, and Monsters, Inc.
Only Lovers Left Alive Rosemary’s Baby (2014) (Blu-ray)