Sin City: A Dame to Kill For

Posted in: The Reel World by Brent Lorentson on August 22nd, 2014 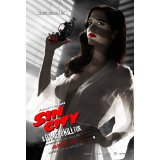 Sin City: A Dame to Kill For marks the return of the iconic graphic novel since it first splashed across the big screen in 2005.  Sin City set out to make the ultimate comic book adaption in which the audience would see the panels move directly from the page and onto the screen.  For me Sin City was a celluloid masterpiece that blended the Noir stories beautifully with all the Hollywood tricks that were at Robert Rodriguez’s disposal.  Frank Miller’s beautiful black and white imagery was more striking than I could have imagined, and it was the film that had me rooting for the big lug Marv (played by Mickey Rourke who seems to have been born for the role).

Nearly a decade later, Rodriguez and Miller have finally gotten back together to create the long-awaited followup and in the process take on my favorite graphic novel story, A Dame to Kill For.  For those unaware about the graphic novel but who saw Sin City, some of the imagery may be confusing, since certain characters who died in the previous film have managed to re-emerge for this prequel/sequel.  Though the story does tie together more tightly this time around with its characters, the sequel just isn’t as much fun this time around.

By no means am I here to say that this is a bad film; in fact the film is a non-stop blast that reminds us just how fun and seedy a trip to Basin City can be.

The film opens up with Marv a bloody mess and trying to connect the pieces to why he’s in the middle of the road with a couple of crunched up cars and broken bodies scattered across the pavement.  He’s been forgetting to take his medicine again, and as we remember from the first film, forgetting seems to be just what gets Marv into all sorts of trouble.  Despite the decade absence, Rourke continues to chew up his scenes and reminds us how fun he is to watch on the screen.

Another story introduces us to Johnny (Joseph Gordon-Levitt); he’s just about the luckiest gambler there is and through narration explains about his luck and how he never loses.  And tonight is his big night, where he’s ready to put his skills to the test in a back-room poker game with the most powerful man in Basin City, Senator Roark (Powers Boothe).  As the story develops we get to know that this is personal for Johnny. His plan for revenge may be clever, but is it worth the risk and the danger that is sure to follow?

But the centerpiece of the fill is that of A Dame to Kill For.  Here we meet Dwight, previously played by Clive Owen but now played by Josh Brolin.  The casting change makes ssense as the story plays out.  When we meet him he’s nothing more than a lowlife hired photographer snapping pictures through an overhead window. As for the dame responsible for putting Dwight through so much heartache and physical pain, Eva Green steps into the role of the cold seductress Ava.  She is a goddess and the devil on screen as we see her chew through men to have them do her bidding.  This also introduces us to The Girls of Old Town, led by Gail (Rosario Dawson) whose heart and loyalty still belong to Dwight and who is willing to help him get his revenge.

I’m leaving out plenty of details, because honestly for those unfamiliar with the story, I just don’t want to ruin any of it.  In the days of Raymond Chandler we had Lauren Bacall and Humphrey Bogart take on the classic noir characters in The Big Sleep.  Miller is our modern-day Chandler, and his writing of Dwight and Ava is just so much fun to watch and listen to that if this were the only entry in the film I would have been satisfied.

As for the final tale in this anthology, Nancy (Jessica Alba) continues to mourn the loss of Hartigan (Bruce Willis).  She’s no longer the free-spirit beauty who worked the stage; instead she has now sunk her depression into the bottle and is hell-bent on getting revenge and killing Senator Roark.  This story is just all kinds of fun despite the fact it goes to some very dark places.

There is a running theme throughout the film; it’s all about getting revenge for or against loved ones.  Though this may work in helping create a connective tissue with the stories, it still feels as though we are simply getting more of the same over and over again.  Part of what made the first Sin City work so well is that each story stood on its own, and the only connection despite the overlapping characters is that it all took place in Basin City.

This time around we also get to see these characters in 3D, and it does help with making this an entertaining experience.  Since technology has improved in the past decade, some of the gore effects are a bit more plentiful, and rather than simply being disgusting, it’s done in a more cartoonish way that just fits beautifully in this black and white landscape.

The violence and nudity are much more plentiful this time around, and this was something I felt was missing in the first Sin City.  I’m not trying to say there should be non-stop boobs and gore in every scene, but when a film is called Sin City, you kind of expect to see some deplorable violence and scantily clad women.  This isn’t the film you’d expect to find your Sunday school teacher at.

While I don’t feel A Dame to Kill For holds up to the first entry in the Sin City franchise, the sequel is a fun and faithful follow-up.  If you loved the first entry, then I’m pretty sure you’ll enjoy the ride this time as well.

Brent Lorentson is a horror writer and film critic based out of Tampa, Florida. With a BA in Digital Film, he co-wrote and co-directed Scavenger Hunt. His short stories have appeared in various horror anthologies. In 2019 his short script Fertile Blood will be a part of the anthology horror film Slumber Party. He is currently working on his first novel A Dark and Secret Place set to be released in late 2019. Favorite Films: Taxi Driver, Fight Club, I Saw the Devil, The Wild Bunch, Dawn of the Dead, A Clockwork Orange, Pulp Fiction, Heathers, The Monster Squad, and High Fidelity.
Are You Here Aerial America: Southeast Collection (Blu-ray)