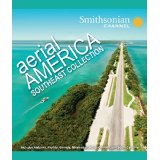 One of the miracles of modern technology is its ability to shrink the world down so you can practically (well, proverbially) hold it in the palm of your hand. The cheerily square Smithsonian Channel series Aerial America goes the other way. In fact, the best thing about the show is how it uses technology to fill every inch of your screen with some of the most famous — along with some of the more underappreciated — U.S. landmarks, employing a larger-than-life/bird’s-eye point of view most of us wouldn’t otherwise be able to enjoy.

Now, Smithsonian Channel and Inception Media Group have released another batch of episodes on Blu-ray.

A quick primer if you’ve never seen the show (as I hadn’t prior to reviewing the Southwest Collection): the series debuted in 2010, and each hour-long episode is devoted to a different U.S. state or region. Every one of those episodes is solely comprised of stunning, leisurely aerial shots of that respective state’s natural and man-made landmarks, along with a brisk history lesson courtesy of narrator Jim Conrad.

Aerial America: Southeast Collection compiles the “Florida”, “Georgia”, “Mississippi”, “Alabama”, “South Carolina” and “North Carolina” episodes into a single Blu-ray. I’ve lived in Florida for the last 15 years, so — unlike with the previous collection — I’m actually pretty familiar with the territory covered here. This could be a blessing or a curse. On one hand, the sense of discovery and wonder is never going to be as great when the area being covered is practically in your backyard. (Sorry, but the region’s myriad national forests can’t really hold a candle to the Grand Friggin’ Canyon.) Then again, this collection had the chance to present some familiar sights from a totally new perspective.

Each episode explores at least a dozen different locations. Unfortunately, the Southeast Collection feels more repetitive and less dynamic than some of Aerial America‘s other offerings. This probably wasn’t a problem when the episodes originally aired weeks apart, but seeing cotton fields, stately plantations, college football fields, and the work of Mound Builders pop up in consecutive episodes was less than inspiring. Of course, there are always some new things to be learned, so I did appreciate hearing the history behind Bonaventure Cemetery (Georgia), Charleston’s Rainbow Row (South Carolina), and the city of Natchez (Mississippi).

Again, I won’t dwell too much on the choice of which landmarks to feature in each episode because everyone has their own idea about what’s interesting and worth spending time on. That being said, a few of the stops — including the Florida homes of Tiger Woods, Derek Jeter, and John Travolta, as well as CNN headquarters in Atlanta — seemed random and unnecessary.

Aerial America episodes don’t have any sort of narrative thread, and they forego the traditional talking-head segments. These choices have their pros and cons. On the plus side, the lack of token “experts” means there’s zero time dedicated to footage of someone chattering away and even more time devoted to showing us truly breathtaking vistas. Though the Southeast Collection seemed to present each state’s history in a slightly more chronological way, the lack of any sort of tangible theme — beyond “all of these things exist in this particular state” — also gives the program freedom to float from one subject to the next without having to worry about excluding a certain location that doesn’t fit a theme.

The downside is the free-flowing sameness becomes numbing after a while. This is especially true when a lot of the sights and information are as redundant as they are in the Southeast Collection. With no tangible story or theme to latch onto and nothing to break up the dreamy aerial shots, the show would basically be an incredibly lavish and extremely well-produced screensaver if it hadn’t been for Conrad’s ever-present narration. And when you combine Conrad’s agreeable, unobtrusive voice with the serene images, this soothing, lighter-than-air program might unintentionally put you to sleep.

That being said, Aerial America still has the ability to teach and thrill. (The most dynamic sequence is probably a POV shot of an aircraft landing in Cape Canaveral, Florida.) More importantly, I still can’t totally crush the no-frills presentation for sitting back and letting the spectacular images do the heavy lifting.

Aerial America: Southwest Collection is presented in its original aspect ratio of 1.78:1. The 1080p image is arrived at with an AVC MPEG-4 codec at an average of 18 mbps. The relatively low bit rate may account for this visual presentation not being quite as dazzling as its Southwest predecessor. Well, there’s that and the fact that there’s an extra episode crammed into this single Blu-ray disc. (The running time here is 291 minutes.) I don’t mean to sound like I’m totally down on this disc. In fact, it remains a clean, thoroughly vibrant image with the ability to captivate. Colors stand out brilliantly in the “Alabama” episode, like when the crimson paint is being applied to the University of Alabama’s football field. However, consistent compression artifacts prevent the image from being as pinpoint as I know it can be.

The Dolby Digital 5.1 track is as pedestrian as the visual element of this release is occasionally eye-popping. You’ll notice the lack of an HD track, which is a bit disappointing. However, the track is entirely comprised of Conrad’s narration — which comes through very clearly — and the gentle, jaunty score that accompanies each episode. (The rears strictly serve to echo the music.) It might’ve been nice to get some atmospheric noise from at least some of the locations, but the soundtrack doesn’t appear to have been much of a priority here. When it comes Aerial America, the eyes have it.

The lack of special features remains disappointing because it would be interesting to get some insight into the making of this show. (And, specifically, how some of the shots were captured.)

Unless you want to feel like you’re watching a nearly five-hour establishing shot, I don’t recommend watching these episodes back-to-back-to-back-to-back-to-back-to-back. However, I still believe this show could make for solid family viewing. The history of the Southeast is nearly as colorful as many of the sights presented here; as a result, I guess I was hoping they would all be presented in a more imaginative or interesting way.