Posted in: No Huddle by Archive Authors on August 26th, 2014 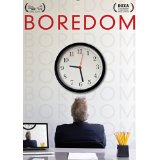 Former reporter Albert Nerenberg (Laughology, Stupidity) has a tongue-in-cheek attitude that is almost ready for Comedy Central’s Daily Show. He interviews various “experts” to get to the truth about boredom. Some of it is actually useful information. One of the most notable things is that most people don’t actively address boredom as a phenomenon, and when they do people take notice. For instance, Annie Britton, who is a professor of epidemiology at the University College London, caused an uproar when she suggested in print that people who suffer high levels of boredom are twice as likely to die. It was covered in all the major media outlets.

Nerenberg uses the loss of his i-Phone as the genesis for this probing study. He’s being ridiculous, which actually helps navigate through a series of interviews where people talk about something they really don’t understand. But some actual experts reveal themselves. Sandi Mann, a professor of Psychology at the University of Central Lancanshire asserts that despite having more endless forms of entertainment than ever, we are actually more bored. Marcel Kinsbourne, a professor of Psychology at the New School in New York, is one of the people studying boredom and repetitive tasks at work. One of the strange paradoxes is that bored brains speed up, making time seem to slow down. Neuroscientist of the University of Waterloo agrees with this perception. Most people who have been bored (which is likely everyone) would probably agree with this. All of this points to an increasing area of study in this neglected part of everyone’s life. Oncologist Ellen Warner of Sunnybrooke Hospital in Toronto suggests that boredom cause levels of stress that lead to higher cortisol levels, obesity and heart disease.

Two of the most boring places are the classroom and the workplace. It is suggested that the main goal of the education systems is to prepare children for the boredom of their future work lives. Many researchers are now suggesting that the classroom thrives on boredom at the expense of the students. Professor Rhonda Clements of Manhattanville College and Professor of Education Jon Bradley of McGill University of Montreal both say that compulsory education is about trapping students behind desks in a regimented environment.

All these serious experts are provided as counterpoint to a frivolous and fun tone throughout, but it does have a serious point. One of the extras in this DVD is a shorter accelerated version of the same documentary for those with short attention spans. Many of the models for work and productivity are decades or centuries old and need to be studied and revised. Of course, early studies back in the 1930’s found that amphetamines helped people with boring and repetitive work but decided caffeine was a much better alternative. Obviously, most people don’t take amphetamines to get through the day, but try to say they can’t have their cup of coffee or cigarettes and see what happens. In fact boredom and anger are two of the most common emotions in the workplace. Modern society finds that the rich can live full and exciting lives, while the rest of us have to work harder and longer just to get by. This is creating a form of madness for the masses which leads to all sorts of risk-taking behavior just to keep from jumping off a bridge, and that includes jumping off a bridge with a bungee cord.

There are no real answers in this movie except to suggest you turn off your TV and i-Phone and just explore the real world around you. I was hoping for more.