Posted in: No Huddle by Brent Lorentson on August 27th, 2014 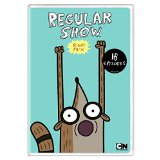 Cartoon Network has just released yet another collection of episodes of Regular Show, only this time they are all based around Rigby.  For those new to the show who want in on the obsession that kids, friends, and other cartoon addicts have for this show, here is a little need-to-know info about the Regular Show.  The show centers on Mordecai (a blue jay) and Rigby (a raccoon) and the crazy adventures they find themselves stuck in the middle of.

The Rigby pack is filled with 16 hilarious episodes that are sure to please the longtime fans of the show, but also work as a DVD to introduce those who are new to the show as well.  That’s the great thing about these smaller episode packs that Cartoon Network has been churning out between the releases of the full seasons; it gives you a taste without hurting your pocketbook too much.

For those who have been collecting the full seasons and previous episode packs of Regular Show, you may want to be careful about picking this title up, since several of the episodes have already been released on DVD before.

In this set we get to meet Don, Rigby’s younger brother who seems to always capture all the attention.  The feud Rigby has with his brother is silly to say the least, but of course it results into some solid laughs.  The first episode on the disc, Bank Shot turns out to be one of the more over-the-top episodes where Rigby has 24 hours to compete in a bank shot competition and win, or suffer the thought of having to pay the dinner bill for his competitor as well as lose his favorite hat.  The shots in this episode remind me of the old-school commercials where Larry Bird and Michael Jordan had a shootout of their own.  It’s this kind of nostalgia that keeps me watching this show even if the target audience can’t even drive yet.

As for my favorite episode on the disc, Survival Skills seems to be the episode I find the most re-watch value in.  Stuck in the woods, Mordecai and Rigby are forced to remember all the survival skills Benson taught them in the past so they can survive the outdoors.  Rigby is at his most dramatic despite Mordechai’s attempts to keep cool.  It’s an episode that reveals a bit of Benson’s tough-love approach to the guys and that perhaps he does actually care for them, even though he will never admit to it.

Like many of these single disc collections, the result is a good time that the family can have together.  These single disc collections work more as something to simply get viewers hooked and rope parents into buying the whole series for their kids.  Regular Show continues to surprise me and keep me smiling, I’m more that a little surprised by how the show manages to stay consistently amusing.  What it is more surprising is how a show about two slackers goes on to show kids a positive message without ever being too heavy-handed with it.

Brent Lorentson is a horror writer and film critic based out of Tampa, Florida. With a BA in Digital Film, he co-wrote and co-directed Scavenger Hunt. His short stories have appeared in various horror anthologies. In 2019 his short script Fertile Blood will be a part of the anthology horror film Slumber Party. He is currently working on his first novel A Dark and Secret Place set to be released in late 2019. Favorite Films: Taxi Driver, Fight Club, I Saw the Devil, The Wild Bunch, Dawn of the Dead, A Clockwork Orange, Pulp Fiction, Heathers, The Monster Squad, and High Fidelity.
The Normal Heart (Blu-ray) Boardwalk Empire: Season 4 (Blu-ray)