Posted in: No Huddle by Gino Sassani on September 1st, 2014 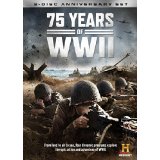 75 Years Of WWII is a collection of episodes from A&E/History’s various war programs that have aired on the networks and have already been released in full sets of their own. It’s intended to be somewhat of a greatest-hits DVD collection. If you’re not inclined to pick up any of the full sets, this might make a nice addition to your collection, but I believe the full sets are far more worth your time.

Disc one contains a three hour two-part excerpt from WWII In HD on D-Day.

They’ve been called The Greatest Generation, and who are we to argue the point? Sitting here writing reviews from my comfortable seat in a state-of-the art home theater, I’m in no position to lay claim to the title. They fought in the bloodiest conflict in modern human history. Over 20 million were killed. That’s a staggering number. If you’re like me, it’s not even real. I can honestly say that those facts have never really reached home as much as they did while watching this footage.

World War II has been a favorite topic for Hollywood films since before the war itself ended. There have been some truly remarkable efforts and some equally unremarkable disasters. Many of these films have been long forgotten. Heck, many of them deserve to be forgotten. But something that should never be forgotten is the stuff of this footage. To do so would be a sacrilege of the worst kind. But these war films, no matter how startling the scenes, no matter how real we might think they are, no matter how visceral the experience might appear, nothing can ever capture the reality like this footage has done.

Each episode utilizes the newfound footage in conjunction with the words of several people who were there. These words come from letters, memoirs, and war correspondent reports. Some of these people survived. Some did not. The few who are still with us provide insight in retrospect along with their words from the time.

There are a few flaws in an otherwise excellent series. I found it distracting when the actor’s voice would overlap with the participant’s voice during segues to them in the present. There is also a bit of reused footage, which I find somewhat disappointing when you consider the great amount of footage discovered and not used. Finally, I was disoriented by the show’s style of telling us one story only to suddenly shift to another, coming back to the first one later. I guess I’m more linear in how I want to see this unfold. Most of these complaints really are minor and are owed, I believe, to an attempt to add drama to an event that did not require it.

“USS Enterprise, aka The Big E, a fighting city of steel. She is the most revered and decorated ship of World War II. On this 360-degree battlefield, where threats loom on the seas, in the skies, and in the ocean depths, the Enterprise’s enemies could be anywhere. Now follow this sea-bound band of brothers through four years of hell. From Pearl Harbor to the doorstep of Japan, there’s nowhere to run, when the war is all around you.”

These are the voyages of the aircraft carrier, Enterprise. Her four-year mission: to explore strange new seas, seek out and destroy the enemy, to boldly go where no carrier has ever gone before. Cue the music. While all of us are familiar with the fictional voyages of the starship Enterprise, few of us know the incredible tale of the World War II aircraft carrier that gave her her name. It’s really a story as thrilling as any that James T. Kirk might tell. She participated in every major battle in the war. For a time, she was the last remaining carrier in the entire Pacific fleet.

We learn not only of the battles, but what life was like for the sailors and pilots who made the floating city their home. The material is presented through an impressive combination of archive footage, computer generated re-enactments, and the voices of surviving men who were there when it all happened. There are times the footage blends seamlessly, and it’s hard to pinpoint the exact place where the source shifted. There are also pieces where the CG is quite obvious, most notably when humans are depicted. There is careful reproduction of the ships and aircraft from the era that are startling in their accuracy and detail. Unfortunately, much of the same footage is reused countless times. It might not appear so obvious when you watch the show once a week. When you try to watch the entire run over a couple of days, the pieces do stand out.

World War II buffs will like this unique take on the events. They can be sure of the stories because they are told by men who were there. The film treats the material with respect, if a bit of a flair for the dramatic. But, of course, these times were dramatic. This will make a rather nice addition to your World War II collection.

Here the show counts down the ten most game-changing weapons of the war. We’re talking from either side. The series looks at everything from German 8mm guns and U-Boats to American fighter planes. The episode reveals the countdown along with diagrams of the weapon and a history of its use. Experts describe the impact of the weapon and explain how it changed strategy and events of the war. It’s a bit anticlimactic, as we all know what the #1 weapon is going to be.

“This program contains rare films of WWII originally shot in color, found during a two-year worldwide search. Much of it has never been seen on television before. These films are presented now in high definition. Some images are graphic in nature. Viewer discretion is advised.”

Take that warning to heart. As much as everyone should see this footage, some simply cannot. No actors. No special effects. No retakes. This is World War II like you’ve never seen it, unless, of course, you were there. Less than 10 % of those who were there are alive today. Still, all of this can be found in larger better sets. Of course, the DVD does not present the footage in HD as the first episode titles might suggest. Whichever way you go, these images are a sobering reality of war at its most brutal. “There’s nowhere to run, when the war is all around you.”

Gino Sassani is a member of the Southeastern Film Critic's Association (SEFCA). He is a film and television critic based in Tampa, Florida. He's also the Senior Editor here at Upcomingdiscs. Gino started reviewing films in the early 1990's as a segment of his local television show Focus. He's an award-winning recording artist for Omega Records. Gino is currently working on his 8th album Merchants & Mercenaries. Gino took over Upcomingdiscs Dec 1, 2008. He works out of a home theater he calls The Reel World. Favorite films: The Godfather, The Godfather Part II, The Body Snatcher (Val Lewton film with Karloff and Lugosi, not the pod people film), Unforgiven, Gladiator, The Lion King, Jaws, Son Of Frankenstein, The Good, The Bad And The Ugly, and Monsters, Inc.
Portlandia – Season Four Exclusive Interview With Thomas L. Phillip Director/Writer Of Sanctuary: Quite a Conundrum