Posted in: No Huddle by Archive Authors on September 1st, 2014 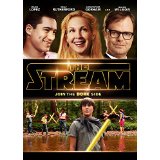 What happens when you mix the movies Stand By Me and Star Wars? You end up with a family-friendly flick called The Stream that benefits the Boys & Girls Club of America. In addition to watching a great movie, you are supporting a great cause too. I dig that. The Stream was created by Estlin Feigley and written by Colin Costello. It stars Mario Lopez (Saved By The Bell, Nip/Tuck), Christopher Gorham (Covert Affairs, Ugly Betty), Kelly Rutherford (Gossip Girl, Melrose Place), Rainn Wilson (The Office, Six Feet Under) and a cast of upcoming child actors; Jacob M Williams, Michael Capperella, Noura Jost, CJ Diehl and Sabrina D. Carter.

In the words of Ben E. King who sung, Stand By Me;

When the night has come

And the land is dark

And the moon is the only light we’ll see…

Set in the summer of 1981, the adventure begins during a game of Star Wars when Ernest Terry’s (Jacob M Williams) light saber, a plastic wiffle ball bat, breaks. Now Ernest and his friends must get to the mall for a new one and back before dinner, while dealing with the town bully, Wyatt (Tyler Elliot Burke), his sidekicks Squirrel, Julius and a vicious dog named Rufus. To add even more craziness, the group must cross over a dangerous stream in the process.

In between all of the chaos are some great parent/child moments, first loves, funny eighties expressions, a few sing-alongs to some great tunes, a burping contest, the mysterious Takawana who lives in a garden, played by the casting director (Michael Vincent Carrera) and plenty of nostalgic clothes, cars, furniture and items I’ll bet most of you forgot about (or never knew).

I actually enjoyed watching this movie. Being a child of the 80‘s, many memories of the times I spent having similar adventures and playing games outside with my friends came flooding back…times that had been long forgotten. Oh, to be young again. To be able to hop on your bike, meet up with your friends for fun and not come home until dinnertime or when the street light came on, whichever happened first.

Don’t be surprised if The Stream feels familiar. There are a lot of obvious “borrowed” elements from Stephen King’s classic eighties movie, Stand By Me. Now your first inclination might be to not want to watch a rip-off, but trust me, The Stream is worth watching, especially if you grew up during that era.

I thought each actor did a great job playing their roles. They delivered their lines naturally, which helped to draw you into the adventure and actually root for them. The only scenes I could have done without involved the character Wollerman (CJ Diehl) and his nervous barfing habit. Yuck.

The action scenes were filmed nice and tight, no camera jiggling or out-of-focus shots. The locations chosen were great and added a very real feel to each scene, especially the stream shots and Star Wars games in the woods. And the soundtrack – Wow! Whoever was in charge of picking the music has excellent taste. The movie features popular songs by The Go-Go’s, Pete Townsend, Joan Jett & The Blackhearts, America, and Billy Squire.  I found myself singing along with the songs a couple of times.

For a low-budget film, I believe The Stream delivers almost as well as a high-end film. Being an advocate against bullying, I felt the script was well written and represented the behavior of the town bully rather well. You will have to watch the movie in order to find out if the nerd got one over on the bully or not.

The DVD comes with the following extra features:

Bonus music video with Joan Jett and the Blackhearts for their song, “Any Weather”.

The song is so catchy it will get into your head and remain for hours.

Public Service Announcements from The Boys & Girls Club of America, AT & T “It Can Wait”, and Taco Bell Foundation For Kids.

The Stream was shot with help from kids at Fresh Films Feature, a company that allows teens interested in making movies, to make movies. I enjoyed watching this clip. Kids from Fresh Films Feature were interviewed about what it was like to work on the set and help make the movie. Their answers might surprise you.