Posted in: Disc Reviews by Brent Lorentson on September 1st, 2014 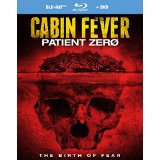 The backwoods flesh-eating disease film Cabin Fever was writer/ director Eli Roth’s first dip into horror and helped establish Roth as one of the “it” guys of the industry despite having a limited film catalog.  The film’s cringe-worthy deaths, not to mention the memorable bathtub sequence, made the film an overnight sensation, and when talk of a potential sequel came out, I was more than a little excited.  Picking up the reins for Roth would be another young rising star of the horror genre, Ti West.  The film made a valiant attempt at capitalizing on the fame of the original, but it just never made the connection with audiences.  Now we have the third entry in the Cabin Fever saga, Cabin Fever: Patient Zero.  This time the film trades in its familiar backwoods local on a tropical paradise in the Caribbean.

When you see the title Patient Zero, you go into this with the hopes that this would be the film to have the big reveal as to how the virus managed to make its way to a lake in the middle of the woods in the outskirts of a small mountain town.  Or you would be like me and have your fingers crossed for more fun from the party guy himself, Deputy Winston.  Unfortunately, we get no familiar faces, but instead two separate storylines that we know inevitably will cross over.

The film jumps into the action as we meet Porter (Sean Astin) who is being locked down in containment after it is believed he is responsible for infecting his family and several others.  Held against his will and unable to see his family, Porter makes things difficult for the doctors who want to poke and prod him to find out if they can develop a cure for whatever it is that he has.  Eventually Porter attacks one of the doctors, which creates a panic and an emergency lockdown of the facility for 48 hours.

While the drama unfolds in the facility, Marcus (Mitch Ryan) is celebrating his final hours as a bachelor with his brother and closest friends.  They plan their getaway to a remote beach that is supposed be uninhabited.  During this little getaway, while diving they discover something is wrong; all the fish seem to be dead.  It’s not long after this frolic in the ocean that the virus begins to spread, and as we saw in the previous films this means nasty boils, skin peeling away and plenty of nastiness to follow.

Though the film goes in predictable directions, what manages to work and kept me engaged was watching these people helplessly deal with the slow and agonizing deaths of friends and coworkers.  The gore is ramped up and there are some really great effect shots here, but the scene I remember and I feel people will talk about is the catfight between two infected girls.  There is nothing sexy about it; this is just rough, intense and gory.

What is missing in this film are characters that we can really care about.  Even though they try to get us to feel sorry for Porter and his situation, his actions simply make him an aggravating character who seems to only care about himself.  As For Marcus and his friends, it’s difficult to believe these are lifelong pals on their last party in paradise.  But as individual characters, the actors do make the best of what they were given and almost work better as characters simply looking out for themselves.

As for my biggest complaint with the film, for those who give JJ Abrams a hard time about lens flares, prepare to be blinded by this film, as it seems to be having you want to look away from the screen, and not because of the gore or scares.  These flares appear in just about every setting and scene, and it just gets to be distracting and in the process allows the film to be an ineffective horror film because of the director choosing style over substance.

Cabin Fever: Patient Zero is presented in the aspect ratio 2.39:1.  The 1080p image is arrived at with an AVC MPEG-4 codec at an average of 26 mbps.  Despite my issues with the lens flares I mentioned above, there are some really nice visuals put on display.  There seems to be a green filter over a lot of the exterior footage.  Considering this was shot digitally and with the Red camera, it’s no surprise how much detail at times is caught in some of the night sequences as well as inside the medical facility.  There is one moment where we basically are given nothing but the light from the characters flashlights that I found a little frustrating, since we couldn’t see what was really going on.  Yet another sequence where the only available light is red; this look revealed some solid imagery.  If this wasn’t a horror film I’d be more excited about the look of this film, but instead it resembles a Victoria’s Secret commercial.

The DTS-HD Master Audio 5.1 track carries the load for this film in creating a horrifying atmosphere.  The wet gory sounds come through great to make some of the stomach-churning visuals more effective.  The sounds of alarm in the facility are effective, but the scene that worked best at being immersive is when the camera goes beneath the surface of the water.  This overall was a cool scene both visually and audio-wise since we are used to seeing images beneath the water of the Caribbean lush with tropical fish, but in this case there is nothing but the rotting remains.

There are no special features on the disc, but the Blu-ray does come with a DVD version of the film.

I was a little optimistic going into this film but instead found it frustrating, and it left me asking more questions rather than filling in the gaps between the films.  As a solo film and called anything else this would have worked, but fitting it into the canon of the Cabin Fever universe, this just was a letdown.

Brent Lorentson is a horror writer and film critic based out of Tampa, Florida. With a BA in Digital Film, he co-wrote and co-directed Scavenger Hunt. His short stories have appeared in various horror anthologies. In 2019 his short script Fertile Blood will be a part of the anthology horror film Slumber Party. He is currently working on his first novel A Dark and Secret Place set to be released in late 2019. Favorite Films: Taxi Driver, Fight Club, I Saw the Devil, The Wild Bunch, Dawn of the Dead, A Clockwork Orange, Pulp Fiction, Heathers, The Monster Squad, and High Fidelity.
The Stream The Originals: Season 1 (Blu-ray)