Posted in: No Huddle by Gino Sassani on September 3rd, 2014 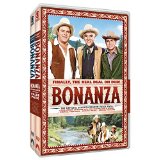 Three-time widower Ben Cartwright  (Greene) runs his famous Ponderosa Ranch with the aid of his three grown sons from three different mothers. There’s Little Joe (Landon), Adam (Roberts) and Hoss (Blocker). Set some time in the mid 1800’s, this long-running series followed the family’s many exploits. In the late 1950’s, westerns accounted for six of the top ten programs on TV. Only Gunsmoke had a longer run than Bonanza. From 1959 to 1973, Ben Cartwright and his boys rode across the small screen. Years later in syndication the series re-emerged as Ponderosa, and a handful of TV movies continued the tale into the 90’s.We never have grown tired of the genre that gave us such heroes as John Wayne and Clint Eastwood.

Season 7 was an important one for the show. Pernell Roberts left the show, so the character of Adam was written out. It was a crucial test for the series, and obviously it did just fine, going on for over twice as many years longer. There was also the test of an actor’s political activism. That was rare in those days, but Don Blocker had begun to campaign aggressively for Democratic candidates, particularly in Texas. Fans had to work harder to separate the actor from the character. Today it’s almost second nature to them and us. With these new challenges the show continued to shine. In fact, it was so popular that NBC put together a feature film from the two-part episode Ride The Wind and released it internationally on the big screen. Things were changing in the film and television landscape, and Bonanza had to adapt. It did more than adapt, it led.

There were some obvious high points to the episodes that season. In The Brass Box a man named Jose Ortega arrives claiming he has documentation that he owns the Ponderosa as well as acres of other lands. Has a Spanish grant put the Cartwrights out of business? There’s even a special feature here with the memories of Michael Dante, who guest starred as Ortega’s son in the episode.

Other good episodes include Devil On Her Shoulder. Ben has to try to prove his latest romance isn’t a witch. A reverend and his wife take exception to the teacher’s scientific leanings. Hoss rescues a young girl in Found Child. Of course, the big teddy bear gets attached to the young girl. He finds himself becoming protective when an abusive uncle comes to claim the child. The new preacher is a reformed gunfighter in Mighty Is The Word. He’s truly repented and hopes to make up for his sins by serving God. That won’t be easy when a relative of one of his victims comes looking for revenge. Witchcraft rears its head yet again in The Strange One. Hoss and Joe come upon an exiled woman who appears to have visions of the future. She blames herself for the death of a child, and it’s up to Ben to talk some sense into her and those who fear her. Ma Lassiter could give lessons to Ma Barker. In Five Sundowns To Sunup, she arrives in town when one of her boys is locked up. She threatens to take a citizen of the city for every day he’s in jail. It cuts close to home when Little Joe is one of her abductees. It’s Bonanza’s version of 12 Angry Men. Little Joe is on a jury and the only holdout to a guilty verdict. He takes it upon himself to prove the boy’s not guilty in A Dublin Lad. In Peace Officer, Ben has to contend with a sadistic man who is put in charge of the law while the sheriff is away. Little Joe is challenged to a duel in The Code. What’s worse, while the Cartwrights try to talk him out of it, the town is placing bets on who will win. Let’s just say Little Joe isn’t the favorite to win. The season ends with A Dollar’s Worth Of Trouble. Hoss has a palm reading that predicts a tragic encounter with a gunslinger. When everything else comes true, Hoss believes he’s got to be prepared for his fate.

CBS is starting to reward fans with more and more features in these sets. It’s still released in half seasons, but you can buy them together in a special value pack. I can’t image anyone just buying half of a season. The extras on these two sets include the theatrical version of Ride The Wind, an interview with Michael Dante, and plenty of network promos and stills. There’s a 20-minute vintage feature called Impact 66. Greene stars in a film for Chevrolet to inspire their salesmen on the new ‘66 models. Yes, it’s still half seasons, but just purchase the value pack instead. “Confucius say ‘win some, lose some’.”

Gino Sassani is a member of the Southeastern Film Critic's Association (SEFCA). He is a film and television critic based in Tampa, Florida. He's also the Senior Editor here at Upcomingdiscs. Gino started reviewing films in the early 1990's as a segment of his local television show Focus. He's an award-winning recording artist for Omega Records. Gino is currently working on his 8th album Merchants & Mercenaries. Gino took over Upcomingdiscs Dec 1, 2008. He works out of a home theater he calls The Reel World. Favorite films: The Godfather, The Godfather Part II, The Body Snatcher (Val Lewton film with Karloff and Lugosi, not the pod people film), Unforgiven, Gladiator, The Lion King, Jaws, Son Of Frankenstein, The Good, The Bad And The Ugly, and Monsters, Inc.
They Came Together (Blu-ray) 14 Blades (Blu-ray)