They Came Together (Blu-ray) 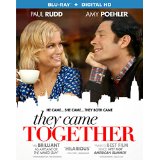 Even those of us who actually enjoy a good romantic comedy have rolled our eyes or groaned about some overused cliche in the genre. Well David Wain and Michael Showalter — who last teamed up to satirize summer camp movies in 2001’s Wet Hot American Summer — have gathered many of their famous, funny friends to make They Came Together, an alternately hilarious and uneven spoof that lovingly skewers rom-com tropes.

The grilling starts pretty much immediately with a jazzy opening credits song and establishing shots of New York City that would make Woody Allen or Nora Ephron proud. (We are told ad nauseam that New York is “almost like another character” in the story.) We meet Joel (Paul Rudd) and Molly (Amy Poehler), who are out to dinner with another couple (Bill Hader and Ellie Kemper) and regale them with the story of how they came together. The R-rated movie’s punny title offers a strong hint at the anarchic, raunchy sensibilities bubbling beneath the picture-perfect rom-com sheen.

Joel, with his non-threatening good looks that are “just Jewish enough,” is a hot-shot exec with Candy Systems and Research. His evil corporation is threatening to shut down Upper Sweet Side, the quirky independent candy shop owned by the spunky and klutzy Molly. Naturally, Joel and Molly hate each other at first sight, but the pair will make up and break up a few times before Joel makes a big speech toward the end and the couple winds up together.

In any other genre, that last sentence might be considered a spoiler. However, Wain (the movie’s director and co-writer) and Showalter (writer/producer) get a lot of milage out of the fact that pretty much every romantic comedy plays out the exact same way. (Also, the back of the movie’s Blu-ray case “gives away” the big speech and the couple’s reconciliation, so don’t get mad at me, spoiler-phobes!)

As you can see, They Came Together borrows heavily from the main plot of You’ve Got Mail, with strong dashes of Forget Paris (the framing device that allows Joel and Molly to recount the story of their relationship over dinner and drinks) and When Harry Met Sally (Molly is a picky eater and, yep, New York is almost like another character in the story). But whereas Wet Hot American Summer was a more personal, relatively poker-faced send-up of the filmmakers’ satirical target, They Came Together is much closer to the ZAZ-style spoofs that gave us absurdist comedy classics like Airplane! and The Naked Gun.

They Came Together similarly features a high volume of jokes centered around literal wordplay (Molly has an actual “Aunt Flo” who is visiting), repetition (a bartender studiously listens to Joel when he says “You can say that again” and “Tell me about it”), and visual gags (like Molly’s klutziness, which the film drops *way* too quickly). The movie brushes up against some genius bits, like Joel not fitting in with Molly’s family for an outrageously random reason, or a hapless, dude-centric basketball with goofy archetypes played by Ken Marino (chronically single guy), Jack McBrayer (sensitive poetic guy), Jason Mantzoukas (Joel’s best friend), and Kenan Thompson (long-suffering married guy).

Then again, the impossibly high volume of jokes also means a fair amount of gags don’t really land. These tended to be the ones that moved too far away from the movie’s rom-com trappings and ventured too far into the realm of the bizarre. Which is how we end up with scenes like the one where the doltish corporate bigwig played by a be-wigged Christopher Meloni takes a dump inside his Halloween costume during a party. It’s also how we get a snooty waiter (played by Zak Orth) who literally has a pole stuck up his backside.

Meloni, Orth and Michael Ian Black (as Joel’s smarmy nemesis) are just three of the Wet Hot American Summer actors who turn up in They Came Together. Rudd and Poehler, who had relatively small roles in Wet Hot American Summer, have seen their stars rise considerably in subsequent years. Despite the movie’s thoroughly silly tone, the stars make for a likable pair that keep you engaged until the closing credits. (A must for any rom-com, whether it’s a joke or not.) Rudd, in particular, seems to be having fun mocking the sorts of films he’s actually starred in during his career. Hader and Kemper also score solid laughs just from their perplexed reaction shots to the story’s absurdity.

The rest of the cast features funny actors like Cobie Smulders and Ed Helms (as self-centered suitors who are all wrong for Joel and Molly), as well as Max Greenfield as Joel’s screw-up younger brother. Each of their characters also represent specific rom-com archetypes, but the movie’s slim 84-minute running time doesn’t give them much to do nor does it allow for a totally satisfying payoff for any of them. (The Blu-ray’s many deleted scenes — which we’ll discuss in the Special Features section — go a long way toward remedying some of that.) Then again, the brisk running time also means that — unlike the conventions that are mercilessly mocked here — They Came Together hardly has a chance to wear out its welcome.

They Came Together is presented in an aspect ratio of 1.78:1. The 1080p image is arrived at with an AVC MPEG-4 codec at an average of 30 mbps. The warm, blemish-free HD image seems to be intentionally/aggressively sunny in its efforts to mimic picturesque romantic comedies. Regardless of whether or not it’s part of the joke, colors here do pop brilliantly — especially during any scene in Molly’s Upper Sweet Side candy shop — and help cover up for some of the shabbier sets and greenscreen effects. The picture momentarily shifts to a B&W image with a 2.40:1 aspect ratio for the totally random Norah Jones music video that invades the movie halfway through. (It’s better if you don’t try to make sense of it.) Black levels are appropriately deep during a few NYC nighttime scenes. For a movie that’s intended to be a joke, this is a versatile and pleasing  presentation from Lionsgate that looks every bit as good as (and sometimes better than) the films it lovingly spoofs.

The DTS-HD Master Audio 5.1 track is, not surprisingly, driven by the jokes and dialogue. Thankfully, both come through clearly and are balanced well with the rest of the surround sound field. The jaunty musical score and songs come on a bit strong at times and push aside some potentially solid, ambient NYC sound effects. Then again the forced cheer from the songs could also be part of the joke.

Audio Commentary with director/co-writer David Wain and producer/co-writer Michael Showalter: The duo talks about making a film together for the first time since Wet Hot American Summer, and point out all the ways the movie’s summer shoot clashed with the story’s fall/winter setting. (Rudd, Poehler and Wain’s wife Zandy Hartig are visibly sweaty during one indoor scene.) It’s a funny, informative conversation that takes us through the project’s many iterations, including the late-in-the-game decision to add the framing device with Hader and Kemper’s characters. (Apparently, a lot of viewers needed the framing device to understand that this thoroughly silly movie was mocking rom-coms…which is kinda scary.) Wain and Showalter also express their affection for romantic comedies, cliches and all.

They All Came Together Featurette: (23:59) Cast and crew — many of whom have worked together before — cover a lot of the same territory that Wain and Showalter discuss in the commentary. They talk about filming in Brooklyn — which was almost like another character — and name check The Zucker Bros. and Mel Brooks as influences. There’s also footage from the movie’s Sundance Film Festival premiere earlier this year, as well as the initial table read in San Francisco. Speaking of which…

San Francisco Sketchfest Table Read: (1:43:58) Showalter introduces a very early version of the script during this Jan. 22, 2012 table read in San Francisco. Some of the film’s eventual cast can be seen here, including Rudd, Poehler, Meloni, and Black. (However, it’s Hartig who performs the role of Molly instead of Poehler.) Interesting to watch just to see how far the script evolved into the finished product.

Deleted Scenes: (34:23) This is a mini treasure trove of funny alternate takes and excised material.  It seems like the biggest victims were Teyonah Paris’s black sassy friend Wanda (whose sole purpose is to be invested in what happens to Molly) and Melanie Lynskey’s career-minded Brenda. There are also a few more entertainingly absurd moments at the evil candy corporation. Some of the more indulgent bits were rightly left on the cutting room floor, but a lot of this stuff is still likely to at least elicit a chuckle. There are 31 separate chapters, but the scenes aren’t presented in a list you can peruse individually.

To me, the best spoofs are made by people who clearly have an affection for the material they’re mocking. (Like what Edgar Wright and Simon Pegg did for zombie movies and action comedies with Shaun of the Dead and Hot Fuzz.) Wain and Showalter, as evidenced by their comments in the Special Features section and this movie’s specificity, absolutely fall in that category.

They Came Together is shoddier and not as well-made as those Wright/Pegg collaborations, and it’s almost definitely too weird to garner the widespread affection earned by the likes of Airplane! and The Naked Gun. However, there are more than enough on-target barbs here that I can see it becoming a cult favorite or a funny antidote to whatever sickeningly sweet rom-com might be invading theaters soon.