Posted in: The Reel World by Archive Authors on September 4th, 2014 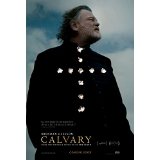 Martin McDonagh is an extremely important and respected playwright. He is also a pretty good filmmaker. His films are In Bruges and Seven Psychopaths. His plays have won too many awards to mention, but some of the titles are The Beauty Queen of Leenane, The Lonesome West, The Pillowman, The Lieutenant of Inishmore, The Skull of Connemara and others. His brother is John Michael McDonagh, the writer/director of The Guard and Calvary. All of these works are very good. Calvary might be my favorite. The word Calvary (also known as Golgotha), not to be confused with cavalry, is the place where Jesus dragged the cross to his final execution. In Calvary, a modern day Irish priest is informed in confession that he will be shot dead in a week. This opening scene is shocking in many ways, so if you are not interested in being challenged, do not bother going to see this film.

Brenden Gleeson is our priest, and he deserves an Oscar nomination. If nothing else materializes between now and the end of the year, he should win. Father James (Gleeson) is in charge of the souls of this pleasant seaside town. The problem is that most of the people he ministers to are not exactly pleasant. They are challenging, difficult, weird or completely out of control. It’s not what you would expect from a quiet and picturesque corner of the world. It’s also not what you would expect a parish priest to have to deal with. Father James doesn’t exactly shake the threat off, but he does go about his business in what may be his last week on Earth. He has many people who need him, and he is being targeted despite being innocent. In fact, he is being targeted because he is innocent. The potential executioner was abused by a priest for many years, but that priest is dead. The soon-to-be possible killer thinks it would be more noteworthy to kill someone who is innocent for the crimes of others. If you happen to be Christian, you know that that is what Jesus Christ did. This analogy is not belabored, but it should definitely be noted. There are many good men who truly follow in the footsteps of Jesus. The movie makes it clear that Father James is not perfect, but he is a good man who makes every effort to face his many challenges with good humor and good grace.

The problem for Father James is that much of what he has to deal with is pretty weird. Nothing is easy in life, it appears. A fantastic cast of actors make up a collection of difficult encounters for Father James. They include Kelly Reilly, Chris O’Dowd, Aiden Gillen, Issaach De Bankole, M. Emmet Walsh, Domhall Gleeson, David Wilmot, Marie Josee Cruze, Ola O’Rourke and others. The involvement of all these characters is typical of a murder mystery, but the murder hasn’t taken place yet. There are endless red herrings and blind alleys, but the film seems to have something different on its mind. That would be the moral questions each one of these blind alleys and red herrings pose. The mystery that needs to be solved is the mystery of life. Each one of these lives is important to Father James, maybe more important than his own life.

Father James was married before he became a priest, and after his wife died, he took his vows. His daughter, Fiona Lavelle (Reilly), has numerous problems which include suicidal thoughts. Father James is well aware that everyone has demons, and it is his job and personal mission to try to save them. He seems to face demons every way he turns, and those include his own demons. I have deliberately not tried to describe the plot, because there are so many cans of worms I didn’t want to open any of them. Also, this is so well written that I didn’t want to spoil the complexity by leaving out details. It is so well written that each word seems perfectly in place. The main focus here is Gleeson, who is a favorite actor of both Martin and John Michael McDonagh. His performance is the anchor and main focus of this film. The moral journey of Father James is a difficult one with many strange turns. Spending time with him on what may be the final week of his life is not for the faint of heart, but is most definitely well worth it.

Contest: Win Home Is Where The Heart Is On DVD From ARC Entertainment Night Moves