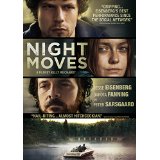 There are movies that can be described as slow burns, and then there’s Night Moves. Director Kelly Reichardt frames much of her 112-minute thriller in a way that invites you to pay an inordinate amount of attention to the lush greenery, winding trails, and tranquil water the film’s three protagonists go to dangerous lengths to preserve. The extended, quiet sequences and exceedingly simple plot also encourage viewers to fill in spaces in the story that seem to have been intentionally left blank. This deliberate approach will undoubtedly infuriate and bore some people, but I personally found it absorbing enough to recommend as an unconventionally tense drama.

Night Moves is about three environmentalists who plot to blow up a hydroelectric dam. (See? I told you the plot was exceedingly simple.) Given that the movie’s synopsis can be neatly wrapped up in a single sentence, the real pleasures in Night Moves are derived from trying to figure out precisely how they’re going to pull it off and how the characters relate to one another.

For example, Josh (Jesse Eisenberg) seems to be the de-facto leader, but that could just be due to the “smartest guy in the room” energy the actor consistently gives off. Or it could simply be because Josh is the common link between his two accomplices. He and the equally serious-minded Dena (Dakota Fanning) meet up with Harmon (Peter Sarsgaard), a charismatic Marine and an acquaintance of Josh’s. We follow them as they take steps to execute their plan — like haggling with the owner of the boat that gives the movie its title — and watch them unravel in its aftermath.

Reichardt previously showcased different parts of Oregon’s landscape in movies like Old Joy and Meek’s Cutoff. (In Night Moves, Josh, Dena and Harmon plan to destroy the Green Peter Dam.) The director works in a no-frills, naturalistic style that means there’s no voiceover narration nor is there a flagrantly expository scene where somebody lays out the details of the plan for the audience’s benefit. We’re basically joining their crusade in medias res and it’s our job to get up to speed with the plan.

The results are surprisingly exhilarating. For example, Reichardt and co-writer/frequent collaborator Jon Raymond manage to transform an early scene in which Dena tries to buy a giant load of ammonium nitrate fertilizer from a feed store clerk (James Le Gros, a terrific ball-buster in his only scene) into a genuinely tense showdown. (Let’s just say I didn’t think I’d ever get to use the words “ammonium nitrate fertilizer” and “tense showdown” in the same sentence.)

The filmmakers are also careful not to attach labels like “activists”, “environmentalists”, or “eco-terrorists” to their protagonists. It makes sense given that the story is told entirely from their perspective — actually, it’s from Josh’s point of view — and eco-terrorists probably don’t go around referring to themselves as “eco-terrorists.” Those labels also aren’t entirely necessary given that Night Moves makes it quite clear this trio represents a particularly radical and narcissistic brand of activism. For example, a passionate, idealistic filmmaker’s work is largely derided and dismissed early on. There’s also the (potentially misguided) notion that blowing up a single dam in the corner of the country is really going to get people talking and thinking.

There aren’t many actors who talk and think better on screen these days than Eisenberg. Here, he taps into his Social Network dark side, but is more disheveled and introspective than usual. The result is a performance that reveals a side of Eisenberg I haven’t seen before: he’s dangerous. (Which, I suppose, bodes well for his upcoming turn as Lex Luthor.) Sarsgaard probably had the least to work with out of the three main actors, but his loose performance as Harmon more than hints at an unreliability that makes you question whether the plan will go off without a hitch (or if Harmon can be trusted). Fanning continues to emanate the “wise beyond her years” aura from her breakout work as a child actor, which makes her cracked resolve in the last act all the more effective.

Despite being presented with the same storytelling skill as the rest of the movie, I didn’t find that final act of quite as engaging or satisfying. The unconventional, sharply-observed tension of the first half is replaced by a well-shot (kudos to cinematographer Christopher Blauvelt) but much more standard thriller climax. The ending is as unassumingly abrupt as the way we were dropped into the middle of the plot at the start of the film. However, it’s not nearly as effective because it clashes with the more conventional climax we just witnessed.

Night Moves wrestles with the notion that sacrifices have to be made to really get people’s attention. (The minimum amount.) Then again, the movie also suggests that “getting attention” may be the whole point, and that blowing up a dam is less about creating solutions and more about creating theater. The pace and relative inscrutability of Night Moves — compared to traditional thrillers — will make it difficult to sit through for some, but I believe it’s worthy of your attention.