Posted in: No Huddle by Brent Lorentson on September 5th, 2014 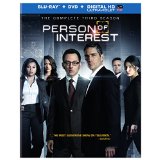 What would you do if you had access to a computer that was capable of giving you information that could prevent a crime from happening?  One step further, what if this machine could locate any person with only a few keystrokes?  This “God” like machine is the basis for what Person of Interest revolves around.  For two seasons we’ve watched as Harold Finch (Michael Emerson) and ex-CIA agent John Reese (Jim Caviezel) used the machine to protect those whom the machine feels are in danger.  But along the way, the lives of Finch and Reese have grown more complicated as their actions have intertwined them with HR (a mafia-like group run by dirty cops), the Russian mob, and numerous government agencies that would like to obtain the machine for their own personal agendas.

Helping out Finch and Reese are NYPD officers Det. Fusco (Kevin Chapman) and Det. Carter (Taraji P. Henson).  In the previous seasons we’ve watched as Fusco has struggled to clear his name after working as a dirty cop in league with HR; Fusco has been one of those characters we’ve seen change the most over the seasons while we see his genuine struggle of keeping his past behind him and showing that he is no longer a dirty cop.  But in season three (well, the first half of the season) the attention is mainly on the struggle Detective Carter has in her attempt to take down HR to avenge her boyfriend’s death in the previous season and clear his name.

This lone-gunman approach to taking down HR makes for some intense, engaging television, watching Detective Carter evolve from being a by-the-book cop to being a woman who will take down her man by any means necessary.  For those who have been watching the series from the start, you know this story arc has been going on for some time, and as it comes to its conclusion at the midpoint of season three, it is well worth the wait, and hold onto your seats for some twists that will change the series as we’ve known it.

As you may recall in the finale of season two, the machine seemed to reach out to a character who could possibly be one of the more dangerous characters in the show, Root (Amy Acker).  I have to say by the end of season three Root is easily my favorite character in the show, and her relationship with the machine is so awkwardly brilliant and insane that every scene we see Root interact with the machine is gold.  Watching her evolve from the sociopath to…well I’m not sure what to call her as season three unfolds … is just part of what makes this series so engaging, because you just never know what to expect from her.

But as season three unfolds a new threat. Vigilance does plenty to keep Finch and Reese busy, which makes it a good thing Shaw (Sarah Shahi) sticks around to help.  Mix in the agency that Shaw used to work for; trying to take down Finch’s machine and working on a project of their own, well, you can see that there is plenty of action to keep viewers in a tight grip from the start and close to this new season.

What makes this show work is it remembers to be fun.   Sure, we get hit with a lot of drama and tragedy, but instead of wallowing in the grief, we get episodes that are just a blast.  For instance we get to see the team rally together for a heist; we see Reese stuck on a trans-Atlantic flight fighting terrorists, and a look at who Finch had as his assistant before our favorite man in a suit.  This is solid storytelling that doesn’t feel watered down and is the quality of television that we’ve grown used to seeing on cable television rather than your standard television.

Just in case the 23-episode season three is still not enough to tide you over till the new season kicks off, there are plenty of bonus features to also keep you occupied.  My favorite of the features is a day in the life of Boker, who plays Bear (the dog) on set.  Bear is a character that I enjoy seeing in the show, right along with his human cast members.  Another fun feature is footage of the cast and crew doing a panel for Comic Con 2013.  These panels let us get to see a fun side of the cast as they interact with the audience.  There is one more bonus feature that is worth checking out for fans of the cast, but for some this may be a bit of a bummer, since it discusses the loss of one of the major characters from the show.  For those who don’t know who this character is, I don’t want to spoil anything, but it is definitely an intense moment in the show, as it deserves to be.

Not since Alias went off the air has there been a series that sucks its viewers into the secret government agency world like Person of Interest does.  I love this show, not as a guilty pleasure but as a show that is simply riveting television.  It’s fun, it’s addictive, it’s what television was meant to be, and something for us to look forward to week to week and wonder what adventures our favorite characters will get into next.

Brent Lorentson is a horror writer and film critic based out of Tampa, Florida. With a BA in Digital Film, he co-wrote and co-directed Scavenger Hunt. His short stories have appeared in various horror anthologies. In 2019 his short script Fertile Blood will be a part of the anthology horror film Slumber Party. He is currently working on his first novel A Dark and Secret Place set to be released in late 2019. Favorite Films: Taxi Driver, Fight Club, I Saw the Devil, The Wild Bunch, Dawn of the Dead, A Clockwork Orange, Pulp Fiction, Heathers, The Monster Squad, and High Fidelity.
Night Moves Joan Rivers (1933-2014)