Posted in: No Huddle by Brent Lorentson on September 8th, 2014 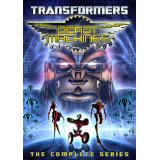 Shout Factory has yet another Transformers animated series to unleash upon the legions of fans who must not be able to get enough of their robots in disguise.  Beast Machines takes place on Cybertron after the Beast Wars.  Beast Wars is yet another series about the Transformers that somehow has gotten past me while reviewing the other series.  The fact that Beast Wars precedes the events in Beast Machines caused a brief moment of confusion.  Thankfully with the target audience being under the age of ten, catching up wasn’t all too difficult.

This time around, there are no Autobots to be found, but instead we get a new breed of hero in the Maximals.  The introduction of Optimus Primal and his friends was a bit jarring considering this series takes place on Cybertron and Optimus is actually a gorilla.  In fact when we meet Optimus and his friends, they are all animals without the ability to transform.  OK, well, that’s not entirely true, they CAN transform, but in this series it’s not just in the physical sense but also on a metaphysical level.  Yes, ladies and gentlemen, these are the Transformers of the modern age, or more appropriately New Age.

For the Maximals they just about have free run of planet Cybertron with the exception of the Vehicons.  The Vehicons basically step in for the Decepticons as the bad guys, only they don’t have the personalities that we grew to love or despise; really they are only villains and a hindrance to the Maximals simply because there are just so many of them.

Throughout the series it attempts to develop relationships with its characters, and despite the threat of a virus that could cause the Maximals to go extinct, there just wasn’t a character I could root for.  Whether it’s Rattrap, Cheetor, or Blackarachnia, it doesn’t take much to figure out what animal these characters are, but beyond what we see of them, arguably we don’t get much more than a generic character to fit the animal.

Those of you who may be reading would be right to think that this doesn’t sound like the Transformers you grew up with.  This is more than a simple departure from the series, but rather a different series altogether, and is only Transformers by name only.  Hasboro may endorse this series, and I doubt they had any problem creating a toy line from this series, but it seems disingenuous to name it Transformers.  This is the first of the animated shows I’ve seen and reviewed where we don’t even have the Transformers theme song,  though having the techno group Leftfield perform the opening music is one of the few things I found myself liking about this series.

There is a three-part episode arc where we get to see the Maximals in all their glory in a fun battle as they struggle to keep their all sparks from the threatening Vehicons.  We basically get to see a large-scale battle with the few Maximals up against hundreds of attack foes.  Despite the odds being against them, this unrealistic battle is what kept me watching and entertained.

Perhaps I may be reading a little too much into the show, but the heavy nature vs. machine is pretty much in your face.  The idea of these Maximals going extinct because of the machines of Cybertron is a bit heavy-handed for a show that targets kids, but I figure if you want to shove an agenda in someone’s face, at least this is a positive one.

Kids may be able to look past the clunky animation, but for me this is perhaps the worst-looking show of the series.  Gone are the days of cell animation, and what we are given is computer-generated figures that are stiff and have very unnatural movements.  There is a surprising lack of detail throughout the show; despite this taking place on a planet, it all seems to look like the same cityscape and roads reused over and over again.

This is easily the worst addition of the Transformers series I’ve seen to date; here’s to hoping it is only better from here on.

Brent Lorentson is a horror writer and film critic based out of Tampa, Florida. With a BA in Digital Film, he co-wrote and co-directed Scavenger Hunt. His short stories have appeared in various horror anthologies. In 2019 his short script Fertile Blood will be a part of the anthology horror film Slumber Party. He is currently working on his first novel A Dark and Secret Place set to be released in late 2019. Favorite Films: Taxi Driver, Fight Club, I Saw the Devil, The Wild Bunch, Dawn of the Dead, A Clockwork Orange, Pulp Fiction, Heathers, The Monster Squad, and High Fidelity.
Joan Rivers (1933-2014) Contest: Win Louder than Words On DVD From Arc Entertainment