Contest: Win Louder than Words On DVD From Arc Entertainment 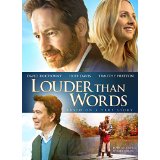 Arc Entertainment is on a roll, and our followers are cashing in. The gifts just keep on coming, and it’s not even Christmas yet. This time they’ve given us 3 copies of the DVD Louder Than Words. The X-Files’ own Agent Mulder, David Duchovny stars  in this inspiring drama. A couple deals with the death of their young daughter. Their tragic loss becomes hope for other children when they create a special hospital in their daughter’s memory. The film also stars Timothy Hutton and Hope Davis. It’ a heartwarming story based on real life.

Gino Sassani is a member of the Southeastern Film Critic's Association (SEFCA). He is a film and television critic based in Tampa, Florida. He's also the Senior Editor here at Upcomingdiscs. Gino started reviewing films in the early 1990's as a segment of his local television show Focus. He's an award-winning recording artist for Omega Records. Gino is currently working on his 8th album Merchants & Mercenaries. Gino took over Upcomingdiscs Dec 1, 2008. He works out of a home theater he calls The Reel World. Favorite films: The Godfather, The Godfather Part II, The Body Snatcher (Val Lewton film with Karloff and Lugosi, not the pod people film), Unforgiven, Gladiator, The Lion King, Jaws, Son Of Frankenstein, The Good, The Bad And The Ugly, and Monsters, Inc.
Transformers Beast Machines: The Complete Series Perry Mason Double Features