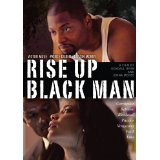 There’s certainly an interesting movie to be made about cultural assimilation and the ensuing racial conflicts within the black community. Those topics have been explored in everything from a classic, brilliantly profane Chris Rock routine to the just-premiered ABC sitcom Black-ish. They’re also ostensibly tackled in Rise Up Black Man, a total mess of a micro-budget drama that tries to do way too much and accomplishes little beyond leaving viewers scratching their heads.

Will (Prince Duren) is a black recent college graduate whose immediate circle of friends — including goofy best buddy Gary (Dustin Morby) and slightly cougar-iffic girlfriend Lisa (Cassie Self) — is predominantly white. Despite its title, the DVD case and logline for Rise Up Black Man sell the film as the story of Will and Gary taking divergent paths into adulthood. However, the actual film devotes just as much time to the charismatically nefarious Rev. Franklin J. King (Victor Muse), who uses his powerful organization and prominent standing within the black community to line his own pockets. Need further proof that DVD cases can’t always be trusted? The film’s running time is listed as 146 minutes; the actual duration is 1 hour and 45 minutes.

That’s a relatively small detail and an honest mistake, but it’s also indicative of the general sloppiness on display with this production. I’m not going to spend too much time banging on the wooden acting or hopelessly limited production values — there obviously wasn’t time/money to shoot many scenes from different angles, so prepare to stare at the backs of actors’ heads for extended periods. However, writer/director/producer Kendall Irvin and producer/cinematographer Jenna McKee don’t get off with a free pass either. Far from it actually.

Rise Up Black Man opens with a raucous rock performance inside a bar that belongs in a beer commercial more than it does in (what is supposedly) an inspirational drama. Putting that incongruity aside — which was actually interesting because it was so unexpected — the movie proceeds to introduce a bunch of unnecessary plot lines that always seem to butt in whenever the movie threatens to become interesting. (I haven’t even mentioned the other thoroughly unnecessary musical interludes, like the one where Will and his friends play football; did Tommy Wiseau drop by to direct a scene?)

For example, Will is twice threatened by an aggressive loudmouth named Bones, who mocks and derides Will for the company he keeps. The conflict seems to be headed toward a fateful showdown, but then nothing happens. It’s the same deal with Will’s elderly, increasingly senile mom — who appears to be at least 50 years older than him, by the way — who vanishes from the movie after Will and Lisa fret about her health for a scene or two. There’s also a late subplot where the group has to raise $250,000 to save a shelter for troubled children from closing down. Do they accomplish it? I have no idea because we never find out! Even the storyline that has Gary bonding with a tough-talking kid named Smack has an absurdly (and comically) tragic resolution.

Honestly, the best bits in the movie have little to do with Will and his aimless friends. Muse is easily the best actor in the film and — despite the stilted blocking and dialogue — I enjoyed the sequence where Rev. King and his group try to blackmail a shoe company by threatening to use their influence to label them as racists. Muse’s slimy charisma looks even better when pitted against Duren, once Will is drawn into Rev. King’s orbit. Duren alternates between being awkward and stiff, which is a problem given that he’s playing the lead character in the movie. Besides Muse, both Morby (with his generically pleasing slacker charm) and El Logan as bar owner Ray (bringing some much needed energy to the proceedings) are the only actors who distinguish themselves.

I admire the fact that this film seeks to inspire viewers. Unfortunately, viewers will mostly likely only feel compelled to Rise Up…and find a better movie to watch.