Posted in: No Huddle by Gino Sassani on September 24th, 2014 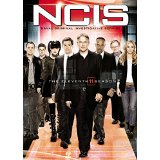 Special Agent Gibbs (Harmon) heads up this group of criminal investigators. Harmon has always been good, but I dare you to find a character he’s played better. He just eats up the part. You won’t have any trouble believing that Gibbs is the seasoned veteran investigator leading this team. Special Agent DiNozzo (Weatherly) is a former Baltimore homicide detective who often lets his determination run his investigation into trouble. He’ll bend a rule or throw a punch, whatever it takes to bring down the bad guy. Pauley Perrette plays the goth chick/forensic specialist Abby Sciuto. She reminds me a ton of the Penelope Garcia character from Criminal Minds. She’s flirty, far too informal for Gibbs, but is a lot smarter and tougher than she appears. Making himself more visible in this series is David McCallum as pathologist Ducky Millard. Ducky is the Quincy of the group as he checks out the bodies. His dry wit makes him my favorite character on the show. Sean Murray plays Tim McGee, who we’ve seen go from a young man with little self-confidence to a strong agent in the field. That doesn’t mean he still doesn’t suffer the barbs of Tony’s sarcasm.

NCIS combines elements from many types of genre shows which make it such a fresh series to watch even after 11 seasons. There’s a little bit of CSI along with a touch of Law & Order. You won’t have to look too hard to also see elements of JAG in there as well. While the soap opera aspects of the show run deeper than I like, I don’t find the relationship stuff here to be as intrusive as it was in JAG.

When the season started there was a strong action premier planned that was quite heavy with the Ziva character. At literally the last minute actress Cote de Pablo decided not to return. The writers managed to keep the action, and on such short notice they delivered a powerful sendoff for Ziva. I’ve always thought this was a strong writing team, but the way they worked on their feet here and the phenomenal episodes they put out make my head spin. This is likely one of the best writer teams on television. The show reached episode 250 with this season, and as much as it’s a team effort, the writers are a huge reason why this show continues to dominate. I have little doubt they will not miss a beat with Ziva’s departure as beloved as the character was.

Of course, with Ziva gone a replacement had to be found. Credit the writers again for taking their time and doing things right. For eight episodes we see a few characters fill the role on a temporary basis. Finally we are introduced to Emily Wickersham as Agent Ellie Bishop. She comes with a little history. She had applied for the job years ago, and something about her stayed with Gibbs. She’s not a copy of Ziva by any means. She’s a fresh face who also brings a lot of odd quirks. She loves to sit on the floor or often on desks or tabletops. She’s a bit bouncy and likely will bond well with Abby. She rubs the old-school guys the wrong way a little at first, but they quickly respect her unique perspective. She’s a good fit, and I don’t think it will take long for you to warm up to her.

The season also serves up a back-door pilot for a spinoff that’s starting now on CBS. There’s a lot of that going on these days. Popular shows are reproducing and dominating time slots with like-minded television. NCIS; New Orleans will star Scott Bakula as the head of a very small but effective team in The Big Easy. Of course, we meet him and travel to New Orleans in this season of NCIS. This is going to be a more laid-back feel for the franchise. Hopefully, no less exciting.

Tony gets to do a lot of globe-trotting this season. He heads to Israel looking for the missing Ziva, and we get a nice farewell between the two. It might not be what the romantic fans wanted, but I think it was the best that could be done under the circumstances. He goes to France to bring home an admiral’s daughter. He’s also dealing with another investigation when a suspect he confronts turns up dead.

Much of the season deals with the team’s pursuit of the terrorist Parsa, played by Karan Oberoi. It’s an emotional hunt that strikes close to home. It allows the McGee character to deal with some serious emotional issues tied to a drone strike. This might be the closest the show has come to having a year-long story arc dominating the season. It’s also one of the more explosive when it comes to stunts and action. They keep redefining themselves here, and that’s how you stay on the air for over 250 episodes.

You get 24 episodes and some cool extras. There’s the typical half-hour season wrap-up. There’s a profile on new character Ellie Bishop. Look for a profile on recurring actor Joe Spanos, the former Hill Street Blues star who has a rather unique relationship with Gibbs. He’s a friend and FBI agent who happens to be married to Gibbs’ ex-wife. There’s a feature on the back-door pilot and one on recording a soundtrack album that features the cast performing songs they wrote to honor people who work to help and rescue others. It’s kind of a 9/11 tie-in. Finally, there’s a look at the 250th episode celebration. Usually, you don’t see 50th intervals celebrated so much, but few shows get this far, so I say why not?

There’s a reason why this show has become the number one scripted drama on television. It really has a little bit of everything, and it’s evolved without changing the core dynamic. There has been little in the way of cast turnover, and the chemistry is quite extraordinary. It can run for a long time before it starts winding down. With the 11th season now on DVD, “I’m really curious to see what season 12 is really all about”.

Gino Sassani is a member of the Southeastern Film Critic's Association (SEFCA). He is a film and television critic based in Tampa, Florida. He's also the Senior Editor here at Upcomingdiscs. Gino started reviewing films in the early 1990's as a segment of his local television show Focus. He's an award-winning recording artist for Omega Records. Gino is currently working on his 8th album Merchants & Mercenaries. Gino took over Upcomingdiscs Dec 1, 2008. He works out of a home theater he calls The Reel World. Favorite films: The Godfather, The Godfather Part II, The Body Snatcher (Val Lewton film with Karloff and Lugosi, not the pod people film), Unforgiven, Gladiator, The Lion King, Jaws, Son Of Frankenstein, The Good, The Bad And The Ugly, and Monsters, Inc.
Rise Up Black Man Revenge: The Complete Third Season