Posted in: The Reel World by Archive Authors on September 29th, 2014 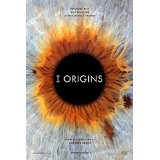 The eyes are the window to the soul, or so we have been told. I Origins is about a scientist studying the evolution of sight in organisms. Part of his research seems to be focused on countering creationists who claim that eyes are an obvious indication of a creator in life on this planet. The scientist, Ian Gray (Michael Pitt) is working on proof that the development of eyes is a process of evolution. His new research assistant, Karen (Brit Marling) surprises Ian with intuitive brilliance and fanatical commitment to the task. They find a species of worm that is an origin species which might be able to prove his theories and make his career. He becomes somewhat distracted by a mysterious woman at a masquerade Halloween party. They have sex in the bathroom and she disappears, but not before he has taken pictures of her eyes, which is an obsession as well as part of his research.

Through a series of almost otherworldly coincidences, he is led to a billboard featuring eyes identical to the ones he photographed. He has become obsessed with that encounter on Halloween and manages to hunt down who he believes is the woman. The mysterious relationship blossoms into a full-blown courtship that leads to going to the courthouse to get married. It turns out they have to wait 24 hours. His impetuousness and fascination is tempered by the fact that they seem to be polar opposites in many ways. It culminates in an argument in a broken-down elevator. He pushes the door open halfway between floors and climbs out. He wants her to climb out as well, but she is nearly hysterical in fear. He thinks she is acting like a child. She agrees to take his hand and climb out. What happens next changes everything.

I Origins is a sober and searching film with a lot on its mind, trying to excavate the divide between science and religion. It takes many turns which put it into the realm of science fiction. The writer/director previously worked on Another Earth with Brit Marling. Both I Origins and Another Earth won the Alfred P. Sloan Prize at the Sundance Film Festival. They take science seriously and present it well and then introduce outrageous speculations about the unknown.

I Origins suggests that there are scientific organizations that are researching the possibilities of a proof for reincarnation. Without revealing too much about the plot, Ian becomes personally involved in this quest despite his previous stance against supernatural beliefs. It sends him on a search across the United States and all the way to India. It involves the eye research which so much a part of his research. It also involves the possibility that his young son is the subject of such a study.

The film is unusual in that it is serious and grounded and yet remains open-minded about some of the most outlandish ideas. I wouldn’t say that I really bought into the premise that the eyes really are a window to the soul, but this film suggests exactly that. I do think as a metaphor it is a beautiful and visually stimulating one. The photographs of many different eyes in brilliant color is a running motif. The film as an experience is somewhat mind-blowing, but again, I don’t think it can be taken seriously at face value. It is very convincing in its presentation, so much so that you almost believe that a scientific research foundation actually exists.  The fact is that there are definitely proponents on both sides of this question. I personally think science should be more open to the ideas of science fiction, because it has been proven time and time again that science fiction is often more fact than fiction.

Overall, I Origins is a beautiful movie to look at and could almost function as a perfect date movie because of its strong romantic undercurrent.

I don’t scoff at its ideas. I, as always, allow my mind to remain open. My eyes are open as well.