Posted in: No Huddle by Brent Lorentson on October 1st, 2014 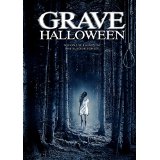 It’s that time of year again, where spooky decorations are set up and pumpkins are carved.  Most importantly, though, is that October is the month where horror fans can celebrate their favorite month of the year with as many blood-soaked horror titles as they can handle.  Unfortunately, though, it seems companies enjoy taking advantage of this time of year and will attach the Halloween name to just about anything in hopes of getting people to buy their product.  I mention this because though the title may be Grave Halloween, it has absolutely nothing to do with the holiday but everything to do with the Suicide Forest in Japan.  The Suicide Forest is an actual location in Japan where hundreds of people go to year after year to take their lives.  It’s gone on for years and has been a hot spot for paranormal researchers to investigate and to try to uncover what brings so many people to this location to die.  It’s a location that screams to be the focal point of horror and fantasy, and it seems SYFY channel is the first on American soil to take on this mysterious location.

Maiko (Kaitlyn Leeb) is a woman who is haunted by the memory of her birth mother. These are not fond memories but instead nightmares that revolve around her mother’s death.  Though she was only four when she was adopted, Maiko has a need to discover the truth about her mother’s death and to release her soul that is possibly trapped within the Suicide Forest.  A team of student filmmakers are working on a documentary about the Suicide Forest and Amber (Cassi Thomson), the producer of the project, plans to make Maiko the focus of her film.

No time is wasted here as the film does a quick introduction with the characters before they head off to film their project in the woods.  Because not much time is spent getting to know these characters, one thing jumps out at me. Why are there so many Americans in Japan?  For a film that takes place in Japan and revolving around a real location and its mythology, I have a bit of a problem with the lack of Asian characters in this film.  I understand the need to relate and appeal to an American audience, but having all these Americans running around the woods from Asian ghosts just doesn’t work when you can’t believe how and why they even got to this location. Though the Canadian wilderness has to stand in for the Japanese forest, many can look past this since in a horror film trees are trees, and just about no matter how you film them they work as a creepy setting.

Looking past the casting, which to be fair won’t bother most viewers, the film does a good job at creating a Japanese ghost story.  Though the film clocks in at less than 90 minutes, it explores the consequences of not only exploring the paranormal but disrespecting cultural values.  In some ways I feel the film points a somewhat judging finger at all the ghost-hunting shows that exploit the paranormal without respect to those who are deceased.

Where the film becomes a little problematic is that it seems to be afraid to stray from the standard horror formula.  There are no surprises here.  Everything is so cookie-cutter with these characters, and instead of playing on the mystery of the forest, instead the forest simply stands in for the stereotypical masked killer we’re used to seeing in most slasher films.  Instead of ambiguity or focusing on suspense, the film just falls back to being a film focused on random unique kills.

There was a lot of potential for this project, but it just fell apart once it started to rely too heavily on the standard horror clichés. Despite its faults, the film is a fun title to check out during this time of year, when you want something to watch but not invest all your attention to.

Brent Lorentson is a horror writer and film critic based out of Tampa, Florida. With a BA in Digital Film, he co-wrote and co-directed Scavenger Hunt. His short stories have appeared in various horror anthologies. In 2019 his short script Fertile Blood will be a part of the anthology horror film Slumber Party. He is currently working on his first novel A Dark and Secret Place set to be released in late 2019. Favorite Films: Taxi Driver, Fight Club, I Saw the Devil, The Wild Bunch, Dawn of the Dead, A Clockwork Orange, Pulp Fiction, Heathers, The Monster Squad, and High Fidelity.
The Midnight Special The Boxtrolls