Posted in: The Reel World by Archive Authors on October 1st, 2014 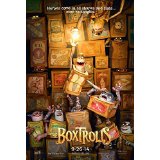 Stop-motion animation remains a rare treat, but your appreciation of the new film, The Boxtrolls, will likely fall into an either love-it or hate-it camp. I will tell you which camp I fall into shortly. Laika Entertainment Studios produced Coraline and Paranorman, which were both oddball stop-motion fun that I enjoyed immensely. The stop-motion process is a dying art that is only rarely attempted any more, but it is widely beloved by film fans. The stop-motion work in The Boxtrolls is excellent. The cast of voice-over actors are excellent as well. The roster includes Sir Ben Kingsley, Jared Harris, Simon Pegg, Nick Frost, Elle Fanning and Tracy Morgan.

The setting is probably some alternate reality where people dress like it was the start of the 19th century England, but machines of all sorts exist. Boxtrolls are very shy and much smaller than regular trolls, which is why they wear cardboard boxes as clothes, also useful as a hiding place when the need arises. A small boy lives down in the depths of the sewers and has been adopted and fitted with his own cardboard box so he will fit right in with the loony, goofy trolls. The boy also eats little creepy crawly bugs like the rest of the trolls. I’ll stop right here to say that things only get weirder from there. The people above street level are crazy and distastefully off center, so as to make the trolls seem normal by comparison. The Boxtrolls is based on an illustrated novel by Alan Snow called Here Be Monsters. The novel is much more detailed and part of a series of books called The Ratbridge Chronicles.
As I said before, I think most people will either love it or hate it. I hated it. I think it is too disturbingly bizarre for most kids, and you’d have to be a pretty weird adult before I would recommend it to you. I already said that the stop-motion work is excellent, but it is in aid of a script that is odious, unpleasant and dimwitted. One could make a case that the story is a satire on class struggle and oppression of minorities, but I say they are not doing anyone any favors including minorities and the oppressed.

The one appealing character is Winnie (Elle Fanning) who is the strong-willed daughter of Lord Portley-Rind (Harris), the leader of the White Hats. The White Hats have secret meetings to savor a large assortment of exotic cheeses, and the head troll catcher, Archibald Snatcher (Kingsley) wants to be a White Hat. Snatcher and his motley crew of helpers promise to capture and eradicate every troll. Winnie doesn’t seem to like her foggy-headed father or the awful Archibald but does spot the grown-up boy with the box trolls and is intrigued. I might have been able to enjoy the wonderful animation more if most of the characters weren’t so repellent. Even Winnie is somewhat confused and offbeat. She isn’t as endearing as the main character in Coraline, for instance. In both Coraline and Paranorman, the central character is endearing and full of heart. Both characters were easy to identify with and had a strong central dilemma to ground us in the story. Winnie in The Boxtrolls is not that kind of character.

She is swept along with general craziness so as to almost become irrelevant. I am actually a little disappointed considering all the high-class talent involved. There is even the contribution of a song with words and music from Eric Idle of Monty Python fame. I think I might be to blame, because perhaps I’ve lost touch with my inner child. Perhaps the weird and gross and silly goings-on are beyond me now. Perhaps if it were a little sillier and maybe not as gross and odd, I could have jumped on the bandwagon. But I think the big problem is that I didn’t like one character in it, not even Winnie. I feel bad saying all of this, and I think I’m going to hunt for my inner child.