Posted in: The Reel World by Brent Lorentson on October 3rd, 2014 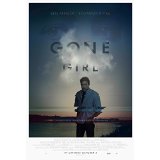 In 1987 Fatal Attraction was released, and now decades later it is the go-to movie when discussing classic scorned women in cinematic history.  Now a new film is about to take the mantel for the greatest scorned female character, Amy Dunne in Gone Girl. Based off the widely successful novel by Gillian Flynn, Gone Girl is perhaps the most haunting film about marriage to ever hit the screen. Director David Fincher is no stranger to directing strong, self-sufficient women on the big screen; look at Panic Room and The Girl with the Dragon Tattoo — but Gone Girl is the closest he’s come to filming his masterpiece.

It’s on the day of his fifth wedding anniversary that we meet Nick Dunne (Ben Affleck), and it’s on this day he discovers that his wife, Amy Dunne (Rosamund Pike) has gone missing.  What’s interesting about this film is that the opening moments aren’t necessarily the beginning of the story; the film takes a very non-linear approach to telling the story, and we see the events unfold through the eyes of both Nick and Amy.  You know how they say “there are always two sides to every story, and the truth is somewhere in the middle”?  Gone Girl takes that precise approach, and what we get is something unique and terrifying.

It’s Detective Rhonda Boney (Kim Dickens) who is tasked with uncovering the truth about Amy’s disappearance and possible homicide, alongside her partner, officer Gilpin (Patrick Fugit).  These two are the ones the viewers will find themselves sharing the perspective on the case with, since they are the ones uncovering the layers and truths as we are.  Even these two have their own suspicions and difference of opinion on the events taking place.

My first impressions of the film as it was unfolding was that the film felt a little cold, and that was the problem I had while watching The Girl with the Dragon Tattoo, that though the story was intriguing, the characters I just couldn’t connect with.  But then we get the discovery of Clue One.  This is literally what you would think it is, but with a twist.  Not only is this, the first solid clue Detective Boney and officer Gilpin find, but it is a clue for Nick as well.  Every year for their anniversary Amy creates a scavenger hunt for Nick, and it’s up to him to figure out the little riddles.  From the discovery of this clue, I wasn’t just hooked but I loved that now, along with these characters, I was along on this ride, this game cleverly orchestrated by the director and Gillian Flynn who stepped in to adapt her own novel for the screen.

Adding even more texture to this story is the approach we see the media take while reporting on the disappearance of Amy.  A lot of the film’s humor is in how we get to watch the media handle Nick and all those closely involved with the case.  For those who have watched Nancy Grace or any of the shows on CNN or Fox, you know how the media enjoys sensationalizing these cases, where we go from loving to hating an individual in a matter of days.  It’s nothing personal for these so called reporters; it’s just the way they manage to maintain a viewership.  I don’t recall ever getting to see a character go through the media wringer more than Nick Dunne.

What I believe most will remember most about this film, long after they’ve exited the theater, is amazing performance we see from Rosamund Pike.  As we see the relationship slide through the various stages of bliss and sorrow to pure hate, it is Pike who commands every scene she is in.  Whether you view her as the victim, or simply as a psychopath, you can’t help but look upon the character of Amy Dunne with awe.

For those wondering why am I being so sparse with details about the story, it’s because no one should have this experience ruined for them.  This is a movie where after the credits rolled I couldn’t shake it from my head; it was something I wanted to discuss with others who had seen the film, or at the very least read the book.  My one complaint about the film falls upon the final minutes of the film.  Fincher delivers us a beautiful iconic image that simply burns into the mind and just simply could have led to one of the most memorable final images put to the screen…But then the film continues for about another five minutes.  This is something where the blame I feel falls onto the writer Gillian Flynn.  In books the writer has the need to tell the story, where as in film the key is to show the story.  These final moments are critical to some degree; who am I to judge, since after all this is Flynn’s story, but it’s this little excess that just left me wondering why this didn’t find its way to the cutting room floor.  This is a 2 hour and 30 minute film and by no means do I feel it was too long, only that the story ended too late.

For those couples who have had their relationship go through this recent recession, and have lost jobs in the process, the struggle we see with Nick and Amy may strike close to home.  I love this film, and it terrifies me.  For those who watch this film, I wonder what thoughts they’ll have when they kiss their loved ones goodnight and close their eyes, because who knows just what that sleeping partner of yours is dreaming about. After all, as the film suggests, how well do you really know the person you love?

Brent Lorentson is a horror writer and film critic based out of Tampa, Florida. With a BA in Digital Film, he co-wrote and co-directed Scavenger Hunt. His short stories have appeared in various horror anthologies. In 2019 his short script Fertile Blood will be a part of the anthology horror film Slumber Party. He is currently working on his first novel A Dark and Secret Place set to be released in late 2019. Favorite Films: Taxi Driver, Fight Club, I Saw the Devil, The Wild Bunch, Dawn of the Dead, A Clockwork Orange, Pulp Fiction, Heathers, The Monster Squad, and High Fidelity.
“31 Nights of Terror” The Paranormal Diaries: Clophill “31 Nights Of Terror” Annabelle