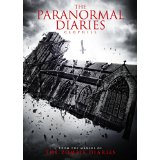 Despite its found-footage conceit and similar-sounding title, The Paranormal Diaries: Clophill is somewhat of a different demon animal than a certain recent horror franchise. Given that found-footage fatigue seems to be setting in among critics and audiences, any sort of deviation from the norm should be welcome. The problem is this film ultimately doesn’t deviate far enough and hedges its bets with a climax that seems transplanted in from a handful of other movies. More importantly, viewers will probably be too bored to even care by the time movie gets around to being scary.

The Paranormal Diaries: Clophill, like many of its horror brethren, is “based on true events.” (I cannot emphasize those quotation marks strongly enough.) What does help the film stand apart is its real-life spooky setting. In 2010, a group of filmmakers sets out to explore and document the haunted history of St. Mary’s Church in Clophill, a quaint English village. That history includes rumors of Satanic rituals and ghostly apparitions. As a result, Clophill and its church have become a popular attraction for grave robbers and people interested in the macabre.

The film’s main characters are documentary coordinator Craig Stovin (Craig Stovin) and wife Criselda (Criselda Cabitac). The couple has two little girls, and we learn Craig and Criselda have previous experience with ghosts. (Their younger daughter claims she communes with spirits.) Craig and Criselda are part of a crew headed by co-directors Kevin Gates and Michael Bartlett, who are also the real-life directors of The Paranormal Diaries: Clophill.

As you can see, virtually all of the characters in this film are playing “themselves.” When The Blair Witch Project arrived 15 years ago, it was largely buoyed by a brilliant, ahead-of-its-time marketing campaign that presented the events of the film as fact. A big part of the appeal was that, to varying degrees, a segment of the audience believed (or wanted to believe) they were witnessing the final hours of those characters’ lives. I’d like to think moviegoers are a little more sophisticated these days, which makes it much harder to accept these real-life filmmakers and crew members are ever in any real peril.

That being said, the conceit actually works for a while in The Paranormal Diaires because the movie is mostly presented as a straightforward documentary on the town and church’s history. (Clophill got widespread attention in 1963 after evidence of a Black Mass was discovered.) In addition to anecdotal talking-head segments, the (on-screen) filmmakers chat with witnesses — including a pair of freaked-out visitors who saw a white figure standing over tombstones a few years earlier — and recruit members of a paranormal society, as well as a security team. The latter move might be one of the smartest things anyone has done in a horror movie in a long time, even if the “security team” doesn’t prove to be terribly effective.

If you’re thinking this film sounds like an extended episode of Ghost Hunters, you’re absolutely right. At least that’s the case until the hard swerve into typical horror fare in the final 20 minutes. (Even though this is supposedly a documentary, there are thriller sound effects and music that suddenly kick in out of nowhere.) The hectic, climactic sequence is lifted from movies like The Last Exorcism and at least three Paranormal Activities, and is followed by a frustratingly abrupt ending that aims for “ambiguous” but lands on “annoying.”

The bottom line is if this movie was always going to end up looking like a run-of-the-mill horror flick  — be prepared for shaky cam, night vision, and a Ouija board — it probably should’ve tried being at least a little scary in its first hour. (Blurry close-ups of gravestones are not all that chilling to me.) Personally, I would’ve been totally ok with a straight-up documentary on Clophill and its famous church. There’s also a brief, interesting exploration of the idea that supernatural events are more likely to occur to a smaller number of people, which leads to the film’s “10 Minutes Alone” experiment.

In the end, The Paranormal Diaries is too boring to be considered an effectively scary horror film, and it’s too silly and unbelievable to be taken seriously as a documentary. There was quite a bit of potential here, but the movie is mostly interesting for what it’s not.