Posted in: No Huddle by Archive Authors on October 5th, 2014 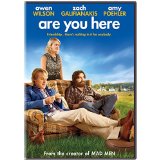 Taking on characters that are far from their norm, Zach Galifianakis, Owen Wilson and Amy Poehler show their comedy with a serious edge in the romantic drama Are You Here.  Surprisingly, the three can hold their own and show their fans that they have an ability to take on other more serious roles. The movie, now on DVD for home viewing, is also available in Blu-ray.

Recluse and bipolar Ben Baker (Galifianakis) has been living in Annapolis for years now, writing a novel that has not been close to seeing the finish line.  He’s a vegan, has issues about society and relies on his best friend Steve Dallas (Wilson) and home grown weed to keep him on focus. The two friends have been inseparable since the sixth grade. Steve has a job at local channel 18 giving the weather on the evening news.  He’s well liked by his audience, but can’t seem to get a handle on his expense account.  He spends whatever money he has on picking up girls at upscale bars and hires a call girl now and then.

One late evening after being turned down by a hooker for lack of funds, Steve goes over to Ben’s place and finds him in an emotional state.  The next day Ben shows up at the TV station where Steve works to let him know his father has died. Steve agrees to take him home to Lanchester, Pennselvania for the funeral. At the funeral they meet up with his sister Terri (Poehler) and his father’s widow Angela Baker (Laura Ramsey).  Although on the best of terms with Terri, he barely knows Angela, who married his father just five years earlier. At the reading of the will, however, the division of his wealth takes an unexpected turn.

The three top comedians take their talent to a serious level, adding comedy only for relief of the heavy-sided drama derived from the script.  Director Matthew Weiner (Mad Men) takes a big chance taking the three out of their element, and almost fails.  What saves the film is the oddity of it all. It’s about friendship and the lengths some will go to prove it.  He puts Poehler in a role of the wicked sister who feels her mentally uncontrollable brother isn’t capable of making decisions about his share of the will amounting to $2.5 million in property. Galifianakis as Ben shows how ditsy he’s become by going off on tangents about vegetarianism and starting  “The Omega Society”, made up of people who are fed up with the BS in the world.  As for Wilson, Steve has the task of keeping everyone together while he’s falling apart.

Of the three, it’s a tossup on which fares best, as it’s the ensemble cast that keeps the romantic drama afloat.  Although it gets spooled out at a fairly slow pace, it still keeps an upbeat tone while the infighting continues stronger and stranger between Terri and Ben.  Relationships are a large part of the film, and the chemistry between Wilson’s Steve and Ramsey’s Angela is as strong as his love for his best friend Ben.

Are you Here has been rated R for language, drug use and some sexual content/nudity. The nudity is stylish and not overstated and the sexuality very brief.  The drug use, however, gets used as a prop too often and loses its comedic effect. All R rated films should be kept out of the hands of immature children as with this one, especially since Are You Here does have some scenes that are very inappropriate for adolescents and young teens.

The video quality is very good, and I enjoyed the fact that the movie fills my whole 16×9 TV screen.  The colors and scenes both indoor and outdoor are nicely depicted, and I found no distortion.

I found the audio quality to be quite good on the DVD.  I did not have the opportunity to see the film in Blu-ray, so I don’t know if the sound via the digital much matters.  The dialog is understandable, and if you miss some lines, there’s always the rewind button on your remote (also subtitles if need be).

A good film, but beware, if you are looking for a rousing comedy, this is not it.