“31 Nights Of Terror” From Dusk Till Dawn: Complete Season One (Blu-ray)

Posted in: Disc Reviews by Brent Lorentson on October 5th, 2014 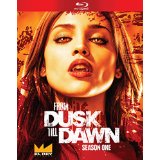 In 1996 it was a brave new world for  Quentin Tarantino and Robert Rodriguez. Tarantino was still riding the wave of Pulp Fiction’s fame, while Rodriguez was going strong with his follow up to El Mariachi, Desperado (which went on to be a bigger hit).  The two had crossed paths at various film festivals, and through the course of their meetings they discussed various projects they could possibly do together.  The project that brought these two together would be horror/ crime genre mixer, From Dusk Till Dawn.  It was a movie that  would not only go on to be a cult hit but also be the film that launched George Clooney into movie stardom (because really, who remembers The Peacemaker?)

Almost twenty years later Rodriguez has established himself as a cinematic rebel who works outside of the Hollywood system.  One would think that it would be career suicide, but instead he’s become one of the most prolific filmmakers with a catalog of films to his credit that are uniquely his and untouched by studio heads.  Now Rodriguez has a new ambitious project to tackle: his own television network, the El Ray Network, which specializes in old grindhouse films and a new slate of genre-themed programming.  The first of its original programming is a television reboot of the 1996 film, From Dusk Till Dawn.

This is something that upon first hearing I thought was crazy; after all, the film spawned numerous sequels that ranged from bad to awful.  This was a project I couldn’t understand the need to reboot; in my eyes this film is a classic and shouldn’t be messed with.  But if someone was going to retool this film, who better than half of the team that made the film possible in the first place?

For those of you who have seen the film, there won’t be any big surprises for you here.  But for those of you who are unaware of the story… The Gecko brothers, Seth (D.J. Cotrona) and Richie (Zane Holtz) are a pair of thieves who are being hunted by the Texas Rangers after a bank job goes bad.  The brothers are on their way to meet up with Carlos (Wilmer Valderrama), who is offering them safe passage to El Ray (a place where criminals go to retire and enjoy their spoils) for a percentage of their last bank job.  Along the way to the Mexican border, the two brothers encounter numerous hiccups.

Seth, for the most part, hasn’t changed much from how he was in the film, being the cool-headed, smooth-talking brother, whereas Richie has evolved into a much more complicated character.  In the film Richie was simply a sexual deviant with a twisted blood-lust who perhaps wasn’t all there in the head.  In the series, Richie now has a gift of sight where he can foresee certain things about people and about the possible future.  But a large part of this new psychic ability seems to come from an ancient knife with strange markings on the handle.  It took a while for me to adjust to these new actors stepping into these roles. Cotrona does a good job at mimicking all the fun quirks that Clooney brought to the role, but Holtz brings something new to his take on Richie.  There is something about this performance that didn’t work for me, but I can’t deny that when he is running lines with Cotrona, the two do play well off one another.

As for the Fuller family that the Geckos kidnap along the way to manage their escape across the border, well, surprisingly enough, I actually found this dynamic worked better in this series.  Robert Patrick steps into the role of Jacob, a preacher who has lost his faith after his wife passed away.  Patrick simply has so much more to work with now that we can see this character open up over the course of several episodes.  He’s just as damaged, but we get to see more of his struggle as he puts on the brave face for his children.  Newcomer Brandon Soo Hoo steps into the role of Scott; before he was a more passive character, but now we get to see his struggle with trying to belong with the family as it seems to be falling apart before his eyes.  But the bright spot of the Fuller clan is Kate, now played by Madison Davenport.  This bit of casting is just perfect; she embodies the innocence of what a preacher’s daughter should be, but is struggling with her own identity as she is forced to sit back and watch her father descend into depression.

Unfortunately the series is not written by Tarantino, and when the characters (not just the Gecko brothers, but everyone) speak, well, you start to appreciate how brilliant Tarantino’s dialog can be.  Sure, the actors can play the characters cool, but when you have writers TRYING to be Tarantino, it comes off as a cheap imitation and just makes some scenes painfully cheesy.

As for the new characters and storylines brought into the show, after all, they had to create 10 episodes worth of content.  Well, on the bright side we get to discover the backstory of Santanico Pandemonium (Eiza Gonzalez). Finally we get to see her as more than just a sexy dancer and why she was worshiped by the vampires.  The best part, though, is we finally get to see what other coolness is hidden beneath the Titty Twister and inside the Mayan temple, not to mention the dirty deeds Carlos is up to.  He’s not just some simpleton criminal, but the bad-ass right hand of Santanico and their criminal monster empire.  Forget True Blood; these vampires are mean and nasty and simply a blast to watch.

The not-so-nice addition to the show is the storyline of Freddie (Jesse Garcia), a Texas Ranger seeking revenge for his fallen partner Earl McGraw (Don Johnson).  I understand the need to give us a man with a badge to pursue the Gecko brothers, but does he have to be (to put it bluntly) a bitch?  I can’t think of a better way to put it.  He whines, he pouts, he doesn’t follow orders, and he throws tantrums like a ten-year-old every time the Gecko brothers narrowly escape. Garcia does what he can with the role, but I simply hated this character, and all I wanted was to see him wind up at the stopping point of a bullet or the fangs of dancer at the bar.

Despite the slow start, once the Geckos meet up with the Fullers, the show seems to run on all cylinders and is fun to watch.    For those wondering how the show handles the violence and nudity, well, it may take a few episodes, but there is plenty of gore on display here, many killings and dismemberments.  As for the nudity or simply the girls at the bar…Don’t worry, the show doesn’t disappoint; there are plenty of lovely ladies to keep you smiling. It’s not going to win any Emmys, but it’s going to win over the hearts of genre fans looking for some brainless, bloody fun.

From Dusk Till Dawn is presented in the aspect ratio 1.78:1.  The 1080p image is arrived at with an AVC MPEG-4 codec at an average of 25 mbps.  Shot digitally, the series doesn’t quite hold up to the look we see in the previous film, the grain and textures we got in the film.  The film has a very warm look to it, with heavy use of yellow filters throughout.  When the series has moments of flashback, we get an even more exaggerated filter with just about all the natural color drained.  Rodriguez has been shooting his films digitally for quite some time now and knows how to get the most from his cameras.  We get a very sharp image.  There were no compression issues that I could see, and the black levels are handled nicely, when they get into the depths of the Mayan temple we get to see plenty of detail that was put into creating this set.  The use of digital blood seems to be much more evident in this presentation, where it doesn’t quite appear cartoonish, but far from natural-looking.

The DTS-HD Master Audio 5.1 track is a solid mix for a television series.  The dialog is clean throughout; when the characters transition to speaking Spanish, we get yellow subtitles to help translate.  The roar of the motorcycle and car engines purrs through the speakers. When we arrive at the Titty Twister we get some nice sound design work here from clinking of bottles and numerous bar sounds, and when things get violent and crazy, well, it all sounds great.  If you listen to the band, you’ll hear them playing some familiar tracks from previous films the Rodriguez has worked on.

Q & A from the Premiere at the Alamo Draft House in Austin, TX: (33:59) A panel with Robert Rodriguez and several cast members of the show.  This is a nice panel discussion and interaction with the audience where they field questions from those who just viewed the opening episode.

On the Set: The Making of From Dusk Till Dawn: (23:08) A solid behind-the-scenes look of the making of the series along with several interviews with cast and crew members.  This was presented as a feature that played on the El Ray network to try to generate buzz for the show.  It was a fun look behind the production.

Best Kills Video: (1:02) It’s just what it sounds like, a collection of some of the cooler kills spanning over the first season run of the show.

Character Bio Featurette: (5:03) A collection of brief montages of the characters that fill the show.  Used more for promoting the show to get viewers interested, really a feature not worth seeing if you’ve seen the show already.

Big Kahuna Commercial:  An ad to the fast food joint that sure does have a tasty-looking burger.

Dos Eques Commercial:  A commercial using characters from the series and located at everyone’s favorite watering hole beyond the border, the family-not-so-friendly Titty Twister.

What’s in the Briefcase Spot:  A promo ad for El Ray with the Gecko brothers.  For those still wondering what is in the briefcase in Pulp Fiction, the answer is here.

I was on the fence with this one, but by the time the final episodes came along I found myself wanting more.  I don’t want the story to just end here, but with the way the last episode ends I’m left wondering, where does the show go from here?  This isn’t The Walking Dead, but it’s a good time to share with friends and a couple of beers.

Brent Lorentson is a horror writer and film critic based out of Tampa, Florida. With a BA in Digital Film, he co-wrote and co-directed Scavenger Hunt. His short stories have appeared in various horror anthologies. In 2019 his short script Fertile Blood will be a part of the anthology horror film Slumber Party. He is currently working on his first novel A Dark and Secret Place set to be released in late 2019. Favorite Films: Taxi Driver, Fight Club, I Saw the Devil, The Wild Bunch, Dawn of the Dead, A Clockwork Orange, Pulp Fiction, Heathers, The Monster Squad, and High Fidelity.
Are You Here Motown 25: Yesterday, Today, Forever