Posted in: No Huddle by Brent Lorentson on October 8th, 2014 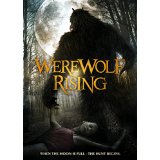 The werewolf continues to be the one monster that just can’t seem to get the film that it deserves.  There has been The Howling and of course An American Werewolf in London, but in the past decade has there been a better werewolf film than Dog Soldiers?  It’s a monster than promises so much violence and can incite so much fear, but instead we are given terrible zombie and vampire films.  With one look at the cover I knew what I was getting into with Werewolf Rising, a low-budget attempt at the monster genre. Though it may not boast a large budget, I can’t help but appreciate this micro-budget attempt that avoids falling back on CGI effects.

Emma (Melissa Carnell) returns to the hometown she grew up in to recover from being an alcoholic.  We don’t get much in the way of how her disease affected her work or social life before making her big move; all we do know is that the alcohol affected her dreams.  These dreams have her being pursued through the woods by some crazed madman who seems to want to kill her.

I like the idea of having Emma isolated from the world where she has to confront these personal demons and sort out what this dream could possibly mean.  But this isolation is interrupted by Johnny Lee (Matt Copko), a drifter who shows up on Emma’s property.

Here I get a little frustrated with the Emma character;, she claims she wants to be on her own and deal with her personal issues, so why does she engage this character in such a friendly manner?  It’s one thing to be nice, but for a woman going to the extreme of leaving the life she knew behind to sort out her problems, why add this stranger to your life?

Also crashing in on Emma’s recovery is her “well-intentioned” uncle, Wayne (Brian Berry).  At first we can believe he’s there to look after his family, but things change during a dinner between Wayne and Emma once he gets into a bottle of wine.  This should only embolden her need to be alone, but still she continues to open herself up to help other people instead of herself.

When we do finally get to see the werewolf attack, it is a welcomed reprieve.   Some may see the werewolf costume and become overcritical about the look, but honestly, it didn’t bother me; I can appreciate seeing a guy in a suit and feel it is far more effective than CGI that instead makes a monster into nothing more than a cartoon.  The restraint from the gore helps as well.  Aside from the opening scene we don’t get much in the way of an introduction to this werewolf, and since we don’t get anything in the way of hearing nonsense about curses or crazed individuals, the notion of this beast that simply appears and attacks makes more of an impact in my eyes.

This is a film that manages to do a lot with a very meager budget.  I like the idea of seeing monsters juxtaposed beside the real monsters in our day to day lives as well as the personal demons we compete with.  This is something for those out there wondering how to make a film of their own and with a limited budget.  It’s a simple yet effective film, though I doubt it’ll be something I’ll get excited about showing to friends during a horror movie marathon.

Brent Lorentson is a horror writer and film critic based out of Tampa, Florida. With a BA in Digital Film, he co-wrote and co-directed Scavenger Hunt. His short stories have appeared in various horror anthologies. In 2019 his short script Fertile Blood will be a part of the anthology horror film Slumber Party. He is currently working on his first novel A Dark and Secret Place set to be released in late 2019. Favorite Films: Taxi Driver, Fight Club, I Saw the Devil, The Wild Bunch, Dawn of the Dead, A Clockwork Orange, Pulp Fiction, Heathers, The Monster Squad, and High Fidelity.
Edge of Tomorrow (Blu-ray 3D) Houdini