Posted in: No Huddle by Archive Authors on October 8th, 2014 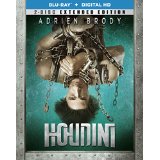 The History Channel’s biography of Houdini is now available on Blu-ray and DVD. The exciting drama delivers a fascinating story of the greatest magician and escape artist the world over.  The transfer from cable to home video is nearly flawless, and the extra 20 minutes of story in the extended version adds a nice touch to the famous entertainer’s prolific story. Special bonus features add credence with actual photos and video of the real Houdini doing some of his most dangerous stunts.

The movie opens with Houdini (Adrien Brody) standing atop a bridge above a river frozen over.  A hole has been cut in the ice, and there are hundreds of onlookers who have come to see him plunge into the water bound with chains.  He jumps and sinks into the cold river, struggling to escape his bondage.

Flashback 17 years and we see Houdini the young man performing on a stage at a sideshow with his brother.  During a break he pulls up a tent flap nearby to watch a song and dance quartet on stage. He catches the eye of Bess (Kristen Connolly), and the two are instantly smitten by each other.  A short time later he asks her to marry him and then adds her to his act. During one of his performances he meets Evan Jones (Jim Collins) who has the ability to construct the props for Houdini’s tricks, and they become close friends.

The film proceeds from there with flashbacks to his early family life as Ehrich Weiss and his first encounter with a magician sawing a woman in half.  Over the four hour movie we see his rise to fame, the development of his dangerous stunts, narrow escapes, his emotional downward spiral and his involvement with the secret service.  The production is very lavish with excellent sets, seamless computer graphics, period piece costumes, a fitting musical score and fine camera work.

Under the guidance of director Uli Edel (Body of Evidence) Adrien Brody, Kristen Connolly and Evan Jones give first-rate performances as the central characters. Brody draws you in with a performance as Houdini that’s mesmerizing. He does most of his stunts, so it is hard to tell when he’s on screen during the dangerous escapes. Brody makes Houdini fascinating, mimicking the great one down to the last detail. (See the bonus features following the film to compare from actual video of Houdini).  Brody’s on screen most of the four hours, and I could have watched even more.

Taking on the role of Bess and bonding the chemistry with Brody, Connolly evolves into the perfect screen partner.  She may be behind Brody during most of the death-defying stunts, but when she’s called upon to be part of the trick, she commands the screen.  Hard to keep your eyes off of her Bess, Connolly turns a sidekick into a show of her own.  In one scene we see her in front of a jail cell with Houdini handcuffed behind bars.  She kisses him goodbye and gives him a sly smile. A sideshow performer herself ,the character of Bess is always on her toes with the “key” to the perfect deception.

Joining the cast as the man who builds the contraptions that allow Houdini to perform the most death defying tricks, Jones plays the guy who makes the tricks work.  James Collins serves the master becoming his right-hand man.  Jones also shows Collins’ devotion to the great escape artist in every scene he’s in front of the camera. He’s transfixed on Houdini’s performance making sure that everything goes right.  Collins is the life-saver and the backup to the trick, even putting his own life in danger if need be.

There are four bonus features that are a must following the feature.  There is also a choice between seeing the film the way it was presented on the History Channel or the extended version on disc number 2 with an extra 20 minutes.

“Houdini the Greatest”: Adrien Brody talks about Houdini’s life and particulars of some of his most perilous tricks.  Actual film and photos of the great one are shown during his narration.

“The Great Escape”: Narrating again Brody along with other actors talk about his life while actual footage is shown.

“The Real Houdini” tells a condensed life story of the escape artist and wife Bess with actual video showing the two of them together.

“Cheating Death” gives a quick compilation of actual film shot during his escapes.

Houdini has not been rated by the TV rating board, but contains some sexuality, brief nudity, trick-related violence and language. Be cautious when deciding to allow immature children see the film, as it does have some scenes that are inappropriate for the very young.

As for the downsides to Houdini, I found the side story of his involvement with the secret service a little too Hollywood.  It’s hard to believe that he would do the things shown in the film or even have the popularity to get close enough to some of the world’s most crafty people. There are even scenes that include the Russian Grigori Rasputin, a dastardly person who was an influential prophet to Tsar Nicolas. I feel the embellishment of his espionage activities wasn’t necessary and did slow down the film somewhat.

The clarity of the Blu-ray is excellent with no distortion.  The transfer from cable to Blu-ray shows no loss of video quality.

Sound quality is very good right from my TV speakers or my upgraded sound system.  The DTS Master Audio 5.1 gave me all the power I needed, and all the dialog came across nicely.