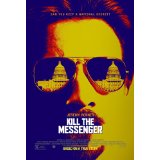 It’s October, which means there’s probably a new, spine-tingling offering coming at you every day. (That’s certainly the case here at UpcomingDiscs.) Kill the Messenger — a thoroughly compelling, true-life drama that channels the crusading spirit of All the President’s Men and The Insider — is no one’s idea of a horror movie. Unless you’re like me, and you happen to be a newspaper reporter.

“National security and crack cocaine in the same sentence…does that not sound strange to you?”

Kill the Messenger is based on the true story of Gary Webb (Jeremy Renner), an investigative reporter with the San Jose Mercury News. We meet Webb in 1996, when his work attracts the attention of an alluring woman (Paz Vega, giving a performance that seems to have been ported over from a much more playful movie; think Penelope Cruz in Blow) who claims her boyfriend sold drugs for the U.S. government. Webb does some digging and uncovers the story of a lifetime: evidence that suggests the U.S. government — namely, the CIA — allowed the sale and distribution of crack cocaine in Los Angeles by Nicaraguan traffickers. The profits were then used to support CIA-backed Contra forces in Nicaragua.

“Some stories are just too true to tell.”

I mentioned earlier that Kill the Messenger is based on the story of Gary Webb — as opposed to the story of the CIA sticking its fingers in its ears and yelling “la-la-la!” — because it’s an important distinction to make. Webb publishes his findings in an investigative series called “Dark Alliance,” which brings him nationwide acclaim. It also brings him a heap of hostile attention from the government and rival newspapers eager to pick apart the scandalous story none of them were able to get first. But as time progresses — and the heat surrounding Webb and his colleagues intensifies — the focus shifts from examining the actual content of Webb’s story to systematically annihilating the reporter’s credibility.

Webb contends with government officials who put up an impenetrable wall, previously-friendly sources who recant their statements (or deny ever speaking to him), and a nervous editorial staff that wilts under the pressure and throws him under the bus. What I’m trying to say is that A Reporter’s Worst Nightmare would’ve been a perfectly acceptable alternate title for this film.

It’s honestly a bit much, at least the way it’s presented by director Michael Cuesta and writer Peter Landesman. The latter worked as an investigative journalist before transitioning into screenwriting, so it’s not exactly a surprise that the script leans heavily in Webb’s favor.  Sure, the film hints at Webb’s recklessness and instability — and outright reveals a devastating past transgression — but I thought the movie might’ve been more interesting if it made us doubt our hero a little bit. Cuesta could have made us think, for example, that a late scene involving a CIA spook played by Ray Liotta only occurred in Webb’s increasingly addled mind.

Personally, I think enough people are naturally distrustful of intrusive government agencies or media outlets with an agenda that Kill the Messenger didn’t have to stack  the audience’s sympathies by showing us the steady stream of bland, humorless government agents who harass Webb. (The exception is the charming DEA agent played by Gil Bellows in a brief, subtly menacing scene.) Kill the Messenger largely avoids specific targets, which means the movie is far from an Oliver North takedown. The film also saddles Webb with an editor (Mary Elizabeth Winstead) who looks like his niece. So if you compare them to the U.S. government and the American media, the drug dealers aren’t so bad! It helps that some of these shady characters are played by charismatic performers like Robert Patrick, Andy Garcia, and Michael K. Williams.

Kill the Messenger opens with a  credit sequence that makes a montage out of America’s War on Drugs. The film is technically a period piece, and the first act contains a verve that the story isn’t quite able to sustain. The movie’s early swagger is mostly due to the way Renner commands the screen. Woodward may have had Bernstein, but Renner pretty much has to carry this film on his own. Kill the Messenger has an impressive ensemble, but Renner’s more formidable scene partners — Liotta, Garcia, Michael Sheen as a weary figure who can see what’s coming for Webb — pop in for what are basically extended cameos. Rosemarie DeWitt is good as Webb’s long-suffering wife; as soon as she appears on screen for the first time, it’s obvious this woman has been “suffering long.” The flip side is there’s not much room for an arc or for DeWitt to do anything dynamic.

Back to Renner, since Kill the Messenger also represents his first outing as a producer. Renner has appeared in some incredibly high-profile projects, even if the electrifying actor who carried a Best Picture winner and stole The Town was nowhere to be found in those movies. (In his two recent blockbusters, Renner played Zombie Hawkeye and Not Matt Damon.) The spark of actorly life returned in American Hustle, where the great joke was that his politician was the most honest guy in the movie. In Kill the Messenger, his Webb is far from perfect — the reporter pretty much stumbles onto his career-making story — but Renner makes him interesting to watch throughout. The actor’s assured charisma goes a long way toward selling scenes where Webb calmly strolls into South Central Los Angeles and a Nicaraguan prison. Renner’s hooded, tired-looking eyes — that retain their enterprising twinkle — help make him seem like a convincing print journalist. (As does his indecipherable scribbles in Webb’s notepad.)

The movie ends with a real-life coda that will make skeptical journalists out of anyone who reads about what ultimately happened to Webb. Kill the Messenger ultimately comes up short of true greatness: it doesn’t have the laser focus and epic sprawl of All the President’s Men, nor does it have the exquisite detail and style Michael Mann brought to The Insider. What it does offer is a terrific lead performance by Renner and the option of watching a refreshingly human-scale drama at the multiplex.