Posted in: The Reel World by Brent Lorentson on October 10th, 2014 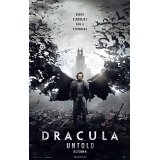 With the Marvel universe taking off and scoring at the box office for many years now, studios are digging for franchises they can start up or reboot to cash in on the craze.  Warner Brothers is stumbling a bit with DC comics, but Universal has remained quiet, that is until someone in the creative department realized they own the properties to the greatest horror characters of all time.  When Dracula, The Wolfman, and The Mummy were in their heyday, actors like Karloff and Lugosi became instant icons of cinema.  Now when special FX have never been better and makeup has come along so far, it seems there could be no better time for Universal to open their vaults of horror and unleash their monsters upon the masses where we can witness Dracula and the Mummy sharing the screen together with Frankenstein’s Monster.

Dracula Untold is supposed to be the first film of this monster revival, and the film’s success could determine the fate of these future monster films.  I’m not sure if it’s a sign of confidence or a red flag when the man you have helming your film is a relatively unknown director, but it seems Universal has a lot of faith in their man Gary Shore.  Sure, finding a director is crucial to making your film, but finding the right actor to fill the shoes that so many legends have filled before in the role of Dracula can make or break your film, and in the case of Dracula Untold we have Luke Evans stepping in as the infamous vampire.

When we first meet Vlad (Evans) he rules over the people of Transylvania. The war with the Turks has come to a truce.  During the time of war, he was a ruthless warrior; now his bloodlust seems to be a thing of the past, as he wants nothing more than to be a good husband to his wife Mirena (Sarah Gadon) and his son.  But as we know peace can never last for too long, and when a Turkish scout goes missing, unrest is on the rise.  Vlad and a group of men believe the one responsible for the missing scout lives up in the mountains, and it is in a cave they discover a creature that they have never encountered before.

This first introduction to the Master Vampire (Charles Dance) is the kind of creepy that the rest of the film is missing.  Allowing him to hide in the shadows and dispatch Vlad’s men with ease was a great way of showing this vampire’s power without being too flashy.  It’s a shame there wasn’t more of this, this evil that is forced to cower in the darkness despite all its power; in so many ways this embodies what Dracula is supposed to become, but unfortunately we never get to see it.

As for the unrest between those of Transylvania and the Turks, Mehmed (Dominic Cooper) comes into Vlad demanding 1000 boys that are to be used by the Turks to become soldiers or suffer the consequences.  This is the moment where Vlad is left with the decision that controls the fate of his kingdom and his legacy, not to mention the fate of his own son.  It’s his refusal to oblige Mehmed that reignites the war with the Turks, and being outnumbered, Vlad makes the most difficult decision and returns to the Master Vampire in the cave.  Vlad seeks this unnatural power to protect his people, but with this power comes a catch: he must resist feeding for three days or else suffer the consequence of being a vampire for the rest of time. (We all know how this works out.)

Now here is where the film takes its biggest misstep.  There is no transition into Vlad becoming a monster, and it seems as though he just instantly knows how to use and control his powers.  Remember when Peter Parker first got his powers how he had a learning curve, or even Tony Stark getting used to his armor?  Well, Vlad has no trouble at all from morphing into hundreds of bats and back into human form, not to mention the superhuman strength; oh, and how can I forget those pearly white fangs?  Vlad arrives at his castle just in time to battle hundreds of soldiers on his own with his new powers which in turn rebirths the name given to him, Dracula, son of the devil.

While it is fun seeing one man take on this army all on his own, at the same time this is just silly nonsense.  There is no menace here; this is just brute strength.  This isn’t a figure you fear, but instead Vlad is a man we are cheering for.  This is revisionist history that is so misguided.  Vlad was a monster, a man who relished in torturing his enemy and filled battlefields with dying soldiers impaled as a display of power.  Here we are watching this character and celebrating this massacre.

It gets messier as Vlad prepares for his final confrontation.  The decisions made out of rage and vengeance may seem fun and cool for the sequence, but really upon reflection you see it’s just pointless and unnecessary.  Kind of like a tent full of silver coins laying everywhere for a final duel that is just even more preposterous.  But really, that’s just about this entire film from the opening frame to the closing credits.  It looks cool and has fun moments, but there is never an attempt to present a film that will haunt its audience or create a monster that will forever be etched in our memories and live in our nightmares.

The film just feels so uneven. Where Vlad is embracing the darkness of the creature he is becoming, this should be something that signals the end of act one or possibly the mid-point of the film.  Instead this is what marches us into the final act of the film.  With a run-time of just over 90 minutes, this film easily could have had another 30 minutes to flesh out this story and give it more meat.  But to further add to this disjointed mess, the film takes us to present day for its final moments.  WHAT!?  We went from being in the 1400’s to modern times.  There is so much history missed out on. Does this mean with future Universal monster films will be sliding back and forth through time, or will we instead have all these new tales take place in modern times?

As a brainless popcorn film, Dracula Untold works more as a telling of a superhero in the 1400’s rather than a mythic horror creature to be feared.  While I didn’t hate this film, it’s a film I’m having a hard time recommending people to go see.  As much as I would love to see Universal unleash their library of monsters on us, I have to hope it is improved upon from this film forward.

Brent Lorentson is a horror writer and film critic based out of Tampa, Florida. With a BA in Digital Film, he co-wrote and co-directed Scavenger Hunt. His short stories have appeared in various horror anthologies. In 2019 his short script Fertile Blood will be a part of the anthology horror film Slumber Party. He is currently working on his first novel A Dark and Secret Place set to be released in late 2019. Favorite Films: Taxi Driver, Fight Club, I Saw the Devil, The Wild Bunch, Dawn of the Dead, A Clockwork Orange, Pulp Fiction, Heathers, The Monster Squad, and High Fidelity.
Sleeping Beauty: Diamond Edition (Blu-ray) Kill the Messenger