Posted in: No Huddle by Archive Authors on October 17th, 2014 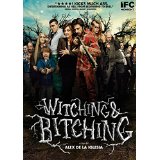 If you are looking for a comedy with horror on DVD for a get-together with friends on Halloween, check out Witching & Bitching. It’s very raunchy, gross and gory, but if you like rude, crude and unglued, then this film’s perfect for an adult party.  The film plays out in Spanish with English subtitles, but don’t let that bother you.  The visuals are so funny and wacky, it’s worth a little reading while you watch.

The movie opens in a city square in Madrid with hundreds of people walking around looking in shop windows and enjoying a nice day. Within the crowd there’s the usual characters entertaining for a handout.  From the green soldiers in Toy Story to Christ carrying a cross, the festive day is slowly winding down.  All of a sudden, the characters head for a gold store and enter it with guns pointed.  Jose (Hugo Silva) pulls out a shotgun and Antonio (Mario Casas) shows them his automatic weapon while demanding gold from the clerks.  Waiting in the store because it’s his day to be with the kid, Jose’s young 10-year-old Sergio (Gabriel Delgado) pulls out a couple of pistols and waves them around.

The robbers break away from the store as the police arrive, but Jose, Sergio and Tony are quick enough to make their escape by carjacking a taxi and its driver Manuel (Jaime Ordonez).  After a wild chase scene, the three men, their captive and a huge bag full of gold rings have traveled beyond Madrid and are on their way to Paris, France to visit Disneyland.  When they get to a small border town called Zugarramordi, a haven for witches, the fleeing robbers get cursed with only one way to escape it; get swallowed whole and hope they come out the other end alive.

The acting by the whole ensemble cast from the main stars to the hundreds of female extras is above average.  I especially liked the featured cast that includes Hugo Silva, Mario Casas, Jaime Ordonez and Gabriel Delgado that give special performances and are never out of character throughout the film.  The conversation between Jose (Silva) and Tony (Casas) during their escape in the taxi that makes up most of the ‘bitching’ part of the film’s title is priceless beyond belief.

A special tip of the hat to Carolina Bang who plays Jose’s ex-wife Eva, who’s trying to catch up with her ex-husband to get her son back. Macarena Gomez does an excellent job as the lustful witch Silvia who keeps hitting on Jose; Carmen Maura plays Silvia’s mother Graciana, a witch with special powers, and the two Spanish Police officers who are in hot pursuit, Pepón Nieto as Inspector Calvo and Secun de la Rosa as Inspector Pacheco.

The bonus features are very cool and include three featurettes that are must-see, but only after you have viewed the movie.

“The Story” told from the perspective of writer/director Alex de la Iglesia.

“The Characters” featuring the main cast.

“Heist Puerto Del Sol” the way they filmed the robbery of the gold store.

Witching & Bitching has not been rated by the MPAA, but contains violence, witches’ gory deeds, sexual pervasiveness, graphic nudity and language throughout. The film is a hoot from start to uncanny ending.  Everything that happens in the movie leads to chapters 9 through 11, a wacky conclusion involving an unforgettable character.  You’ll be glad I recommended the film, because it’s the most creative script I’ve seen in a long while.  I know you didn’t see this one coming. Do not let anyone under 17 see the DVD; just lock it away until you want to relive it for another party. The film is shown in its original Spanish language with English subtitles.

By the way, there is an actual town called Zugarramordi, and it looks like the town they drive through during the film.  Back in 1611 it is said that the vicinity was a haven for witches.

A magical script for a bewitching adult party.