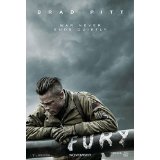 “Ideals are peaceful. History is violent.”

David Ayer doesn’t have a huge resume of films to his credit. In his 15 years as a director he’s only given us five films. Add just another three as a writer. What he has done as a writer and/or director appears to explore some of the same themes of machismo under heavy fire that are splattered all about Fury along with the blood and gore that is the natural byproduct of war. He’s the kind of filmmaker who doesn’t appear to tackle a project unless he finds he has something to say. In the past that voice hasn’t always been terribly original. And while Fury contains pretty much every World War II stereotype ever filmed, Ayer has found a way to present the over-explored genre in a new and clever way at times. You have to exhibit great patience. There are many moments where Ayer stretches a scene to the point where you really feel the nearly 2 1/2 hour running time. During those moments you might find yourself questioning the investment of cash and time you’ve given him, and rightly so. Ayer can milk a moment like no one else in the business. But, if you stick with it, Fury will deliver just enough of those incredible moments that will make you glad you did.

The best news here starts with the story itself. This is an original story that makes no claims to any actual event or moment in history. It’s about time we abandoned the idea that a filmmaker can tell a story of bravery better than the events themselves played out with no audience to cheer and only history scholars to mark. That’s a skill few have ever truly achieved. Here we’re not burdened with the idea that we have to honor a real person. There’s no duty to a surviving family or hero. The only master Ayer has to serve here is the story, which is also his own. It’s a freedom he makes quite good use of. Perhaps it also relieves us as an audience of the guilt of finding ourselves entertained by such horror, knowing all the while we’re watching someone’s real-life struggle, albeit Hollywood’s version of said struggle. Whatever the value or argument here, I found a totally fictionalized story to be a bit refreshing.

Don “Wardaddy” Collier (Pitt) is the commander of a five-man Sherman tank crew who have suddenly found themselves one crewman short. Norman Ellison (Lerman) is an unseasoned soldier who finds himself in the unenviable position of having to replace the lost man. It’s not going to be an easy task. These crews live, fight and die in close quarters, and the good crews become quite close. Germany’s tanks are superior in every way, and they are tearing the American tank divisions to shreds. Norman is going to have to prove himself to earn their respect. To make matters worse, he’s somewhat hesitant to kill, an issue that will have tragic consequences. Collier attempts to be somewhat of a stern father figure to the green recruit which only serves to provide even more abuse from his new crewmates. It’s only after a heartfelt personal loss that Norman is transformed into a “fighting man”.

The crew also consists of the bible-belt Christian Boyd “Bible” Swan (LaBeouf) who mans the turret cannon. Grady Travis (Bernthal) is the man responsible for keeping the big gun loaded. Trini Garcia (Pena) rounds out the crew. They serve in a tank they’ve nicknamed Fury. In case you couldn’t figure out where the film’s title comes from, it’s painted on both sides of the tank’s turret gun. They’ve been a very tight crew, but the arrival of Norman has caused a schism in the group, and some of their less-desirable personality traits begin to emerge. There are moments in the film where it almost seems as if they absolutely hate each other. Acts of brutality and cruelty towards Norman and each other appear about to split this crew irrevocably. How will they function when they are suddenly alone and besieged by a huge column of the enemy’s army? That’s where all of this is leading. Follow if you dare.

The first thing I noticed, from the very first tracking shot of a German horse soldier, is that this film has a decidedly stage-production feel to it. It’s an intimate film where characters are given the kind of moments typically found in a stage production. The feel extends to the cinematography itself. Ayer goes for the unconventional frame that sets this film apart from any other war movie I’ve seen. The focus is always on these five characters and not so much on the war around them. You’ll feel a bit like you’re at the next Star Wars film. The tracer shots flash red and green like sci-fi laser shots.

That isn’t to say it’s not a brutal film. Instead of being overwhelmed with set pieces that provide wall-to-wall killing and death, Ayer keeps the focus on the characters. When he delivers his gory shots they’re quick and literally take you by surprise by their intense nature. Instead of the steady bombardment, we get short bursts that are so much more effective because we aren’t allowed to get quite so desensitized throughout the entire film. When the moments come, you’re forced to react. But before those images can settle in your mind or your eyes adjust to the brutality, we’re snapped instantly back to the characters. It’s not until the final act that we’re given the constant barrage that usually marks these kinds of films. When it comes, it’s exhausting.

Of course, if you’re going to stage a war film so intimately, you must rely even more on your cast than ever before. Fortunately, this cast doesn’t disappoint. Brad Pitt easily shows a maturity away from his pretty-boy image and roles that allow us to buy into this complicated leader. For the first time ever, I haven’t found myself completely irritated by Shia LaBeouf. In every roll he’s played, he’s got this silly grin that has always kept me an arm’s distance away from his character. For the first time the actor was lost to a character, and I was soon completely ignorant of the performer. Michael Pena is always good. He’s the heart of this group, a part Pena has a natural talent for. He’s even able to provide just a touch of comic relief but nothing distracting or over-the-top. Together is where the real magic lies. These are complicated relationships that evolve almost every hour. The staged production element means that there’s a certain choreography in the dialog, almost lyrical in nature. It all depends on that chemistry.

One is reminded of the cramped quarters of Das Boot. When you consider that U-571 was Ayer’s first writing credit, that might not come as too much of a surprise. I’m honestly surprised that no one has approached the idea of a tank crew like this before. It’s unique and fresh enough that I can forgive the tired clichés that also dominate the film. Still, it manages to lead us to an emotional climax made even more tragic that it occurs in the dying last few days of the war. It was already over. Hitler knew it, and his final desperate tactics were the last death throes of one of history’s bloodiest chapters.

War is hell, or so we’ve been told. After spending time with the tank crew of Fury, I have no doubt that it’s true. Getting to watch and then write about the movies? “Best job ever.”

Gino Sassani is a member of the Southeastern Film Critic's Association (SEFCA). He is a film and television critic based in Tampa, Florida. He's also the Senior Editor here at Upcomingdiscs. Gino started reviewing films in the early 1990's as a segment of his local television show Focus. He's an award-winning recording artist for Omega Records. Gino is currently working on his 8th album Merchants & Mercenaries. Gino took over Upcomingdiscs Dec 1, 2008. He works out of a home theater he calls The Reel World. Favorite films: The Godfather, The Godfather Part II, The Body Snatcher (Val Lewton film with Karloff and Lugosi, not the pod people film), Unforgiven, Gladiator, The Lion King, Jaws, Son Of Frankenstein, The Good, The Bad And The Ugly, and Monsters, Inc.
“31 Nights Of Terror” Witching & Bitching “31 Nights Of Terror” Chemical Peel