Posted in: No Huddle by Brent Lorentson on October 18th, 2014 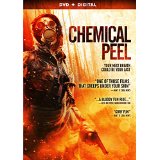 Unless you have been living under a rock, I’m sure by now you’ve heard about the Ebola scare that is headlining the airwaves.  The release of Chemical Peel couldn’t be timelier to effectively feed off the fears of the American public that is glued to their television screens, waiting for the announcement of the newly infected.  This is the kind of free marketing even the big-budget films wish they could get.  Unfortunately what is missing from the film are characters for us to care about and root for, and that is never a good sign.

A group of friends skip the fun of having a bachelorette party in Vegas and decide instead to have the party at Rae’s (Natalie Victoria) grandfather’s home.   Sure, this means no male strippers or cheap buffet bars, but for the girls it becomes their one last party together before Angela (Arielle Brachfeld) gets married.  The odd thing about this is Angela has never been able to forgive her friend Rae for an accident that occurred that killed Angela’s sister.  Sure, Rae may have the best intentions of patching up their friendship, but Angela is just filled with too much rage to be letting go of this grudge any time soon.  The mending of the friendship between Rae and Angela may at first seem like a movie-of-the-week notion, but it’s a more believable direction than we see here.

When the girls wake up from their night of drinking, a haze surrounds the house.  This isn’t your typical fog, and when Deb (Lony’e Perrine) discovers her baby is no longer breathing, she quickly escapes into the haze, taking the SUV (the only transportation) to try to get help.  I can’t get past the logic the character has in bringing the baby with her to a bachelorette party, I’m sure it’s been known to happen, but it does nothing to really further the story.

This is a film that has so many moments where you question the logic of the characters that you will find yourself at one point or another smacking your head in frustration.

As for the disaster that is occurring, this is actually a disturbing possibility that could occur for those that live in some secluded locations.  This is basically the nightmare of what can happen when you decide to live on the outskirts of society.  The scenario that is set up here is the selling point of the film.  The execution and look of the film elevate this film to looking like more than just an independent production.

It’s frustrating that this film isn’t better than it is.  Had the only conflict been between the women and them surviving the poisonous gas outside, then possibly we could have cared about these characters.  Sure, in many films where characters are locked down together we get our fair share of bickering, but usually it’s topical and drives the story and conflict.  Here the bickering and hostility of the characters towards one another is just pointless filler that had me wishing the one character would simply get killed off already.

But there is a moment in the final act of the film where it pulled me back in and gave me hope that this could end on a positive note.  The introduction of a mysterious figure adds some fun drama and a dynamic that I wish had been introduced sooner.  Is this a character who can offer them salvation from their near death, or is this a new threat?  Just as the film had me grinning, there is a bit of a zinger towards the end that just caught me off guard and almost ruined the good favor the film had earned back.

Right now films or shows about the plague should be in demand; unfortunately there are so many great hits one should revisit before this one pops up on your Netflix.  This isn’t Outbreak or even Cabin Fever 2; instead this is a film that came close to being a success but instead arrived DOA.

Brent Lorentson is a horror writer and film critic based out of Tampa, Florida. With a BA in Digital Film, he co-wrote and co-directed Scavenger Hunt. His short stories have appeared in various horror anthologies. In 2019 his short script Fertile Blood will be a part of the anthology horror film Slumber Party. He is currently working on his first novel A Dark and Secret Place set to be released in late 2019. Favorite Films: Taxi Driver, Fight Club, I Saw the Devil, The Wild Bunch, Dawn of the Dead, A Clockwork Orange, Pulp Fiction, Heathers, The Monster Squad, and High Fidelity.
Fury “31 Nights Of Terror” Contest – Win Under Wraps From Arc Entertainment