Posted in: The Reel World by Brent Lorentson on October 31st, 2014 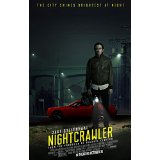 When I first walked out from the theater after watching Nightcrawler, the thing that stuck with me the most is how great Jake Gyllenhaal was in this film.  This isn’t the first performance he’s caught my attention in; he’s an actor who pretty much any time I see him in a film he’s one of the most memorable aspects of the film.  Whether it’s his moody performance in Donnie Darko, his offbeat portrayal as a cop in Prisoners, or even him taking a risk as a gay cowboy in Brokeback Mountain, every role he does something more with the character where we can believe he is this person we see on the screen.  Nightcrawler is no exception, and in this role Gyllenhaal is simply terrifying as Lou Bloom.

When we first meet Lou (Gyllenhaal), he’s in the middle of scavenging a location and stealing its copper and fencing.  He’s not ma master thief by any means; Lou is simply a guy who does what he needs to survive, all while trying to better himself in the process.  He’s a go-getter in the worst possible way and has the most awkward social skills I’ve seen in a character in some time.  At times we see Lou and we laugh at his social inappropriateness, but then as the film progresses our laughter turns to cringes as we discover he simply has no grasp on human emotion and is capable of saying and doing some horrible things.

It’s when Lou sees a news crew arrive on scene to a traffic accident and watches as they get footage that we see a spark of excitement in Lou.  He’s intrigued, and we see the wheels turn behind his cool eyes as he sees not only has he discovered a new career, but that this may be what he was always meant to do.  Seeing how Lou comes into possession of a camera and police scanner is fun to say the least, and how he operates in acquiring these necessities is a skill we see him use in many variations when he encounters something he wants that another possesses.

Is it logical how quickly Lou is able to get his first-time footage into the hands of members of a news station and how quickly it is put on air?  Well, for the average Joe you’d be skeptical, but Lou is a force of nature who is unlike anyone else.  He has a work ethic that you can’t help but respect, and as we see him move from one crime scene to the next, we can see how he learns and evolves, and in no time he is shooting and cutting footage just like the pros he races up against to get the winning “shot”.

Bill Paxton plays Joe Loder, a nightcrawler (basically a slang term for a camera guy that is a crime-scene chaser), who is the big fish in the Los Angeles area shooting the big stories. This is a rivalry I wish we could have seen more of; every scene between Lou and Joe is one of those where you just know these two alpha males could never get along, but the two are one and the same only with two methodologies.

Other than Gyllenhaal the performance that also shines is from Rene Russo as Nina, a reporter who seems to be in the twilight of her career, but she is still hungry for fame and isn’t ready to retire.  Nina is a woman who is used to taking charge in a male-dominated profession, and we see her dig her claws in when she is passionate about what she wants, but it’s her scenes when up against Lou that are just stunning, baffling, but altogether brilliant.  Seeing the two negotiate pay or discussing sweeps week, these are the scenes that are chilling; the threat of violence that lingers in these dialog exchanges are what will stick with you.  Russo looks amazing and hopefully will get some awards-season love for this supporting role.

Where the film hits its stride is when Lou decides to hire an assistant, Rick (Riz Ahmed) to help monitor the police scanner and help navigate the labyrinthine streets of LA.  The dynamic between the two is entertaining from the moment Rick stumbles through the interview up to the capture of those involved in the “Horror House” story.  Rick attempts to not just be Lou’s friend and partner but to see if there is a conscience hidden within Lou.

Though the film is most likely shot entirely in digital, this is a good-looking film that at times has a style reminiscent to the late 60’s and early 70’s.  The night cinematography of Los Angeles is simply enchanting and captures its beauty from afar, but also its grimy underbelly in the process.  The news footage we see Lou capture is unsettling as much as it is impossible to look away from.  From seeing Lou organize the “perfect” shot of a car accident, to the gripping footage we see of officers moving in to arrest armed suspects, it’s easy to believe why this footage is the envy of those working in the newsroom.

Writer and director Dan Gilroy has delivered a film that is haunting and humorous. Yes, this film has plenty of humor, but it is dark and comes from the most uncomfortable situations.  While watching the film it’s impossible to not think back to such classics as Network and Taxi Driver, because Nightcrawler is simply what you get when you put those classics together.  And just as Robert DeNiro became responsible for the iconic role of Travis Bickle, I believe Jake Gyllenhaal has done the same with his performance as Louis Bloom.

Though the film may be a long shot in getting some awards-season love, Gyllenhaal is simply brilliant in this role.  After this film, I don’t believe I’ll be able to look at a news segment the same way again, as I’ll wonder just what was done to get that perfect shot.  Nightcrawler may not be the most traditional film to see open on Halloween; it is still a film that is haunting and will stick with you long after the credits have rolled.

“I think Lou is inspiring us to reach a little higher.”

Brent Lorentson is a horror writer and film critic based out of Tampa, Florida. With a BA in Digital Film, he co-wrote and co-directed Scavenger Hunt. His short stories have appeared in various horror anthologies. In 2019 his short script Fertile Blood will be a part of the anthology horror film Slumber Party. He is currently working on his first novel A Dark and Secret Place set to be released in late 2019. Favorite Films: Taxi Driver, Fight Club, I Saw the Devil, The Wild Bunch, Dawn of the Dead, A Clockwork Orange, Pulp Fiction, Heathers, The Monster Squad, and High Fidelity.
Whiplash “31 Nights Of Terror” Halloween: The Complete Collection Limited Deluxe Edition